This is the award of Life Membership of scottishathletics.

In 2021, the Honorary Life Membership award was given to Bob Masson, Janice Hendrie and Alistair Aitchison. 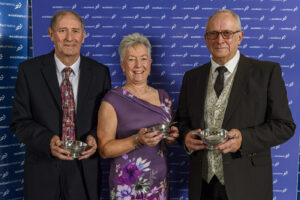 First becoming involved with athletics almost 30 years ago when his daughter competed, Alistair has been a valued member of many groups over that time and has volunteered in many roles including fund raising, press officer and membership secretary. As a Track umpire and judge he has attended events the length and breadth of the UK and at all levels from local to national to international as well as the Olympic Games in London. As the head of the track discipline between 2013 and 2021 Alistair nurtured, guided and supported countless new track umpires within athletics in Scotland, he has also recently been appointed to the UK Athletics peer group to help athletics grow nationally.

In 2019 Janie was awarded the British Empire Medal in the New Year’s Honours list recognising over 40 years of dedication to athletics. Janice has helped over 2000 athletes not only participate in athletics but also to continue an active lifestyle. She has held Team Manager roles with the Scottish Schools Athletics Association and scottishathletics and convened the SSAA Championships for 10 years. As a coach education tutor since 2000 she continues to inspire the next generation of coaches and was instrumental when introducing Run, Jump and Throw and Startrack programmes nationally.

Since the 1970s Bob has been an active Athlete, Coach, Official and Administrator for Aberdeen AAC. His contribution to Athletics in Scotland is far reaching. He has coached multiple Scottish National champions and internationals including a World Masters Champion and two members of the Scottish silver medal winning 4x400m quartet at the 1990 Commonwealth Games.
His wisdom and knowledge of athletics equipment and maintenance ensures that Aberdeen Sports Village is able to host all levels of events from local to the National Age Group championships in 2021, he is always on hand to offer advice, help and technical feedback to all.

In 2020, the Honorary Life Membership award was given to Moira Maguire, Joyce Wighton and Dave Finlayson.