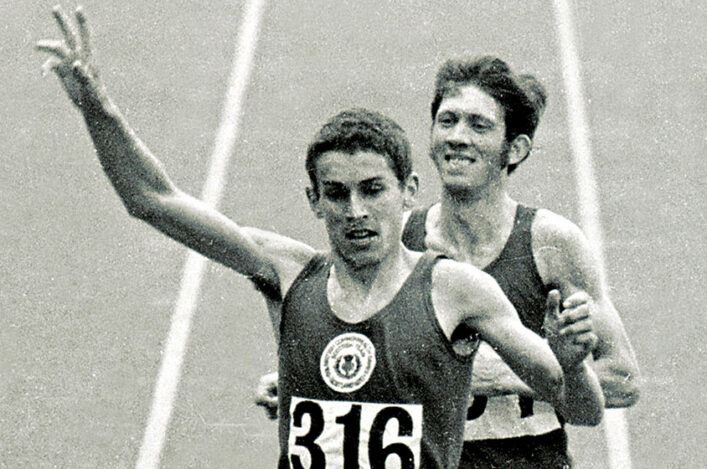 Pictured: Ian Stewart crosses the line – thanks to Mark Shearman for the photograph

On 7 August 1966, at a meeting of the Commonwealth Games Federation in Kingston, Jamaica, where the 1966 Games were taking place, Edinburgh gained the decision to host the 1970 Commonwealth Games by an 18-11 vote over Christchurch, New Zealand.

The Lord Provost of Edinburgh, Herbert A. Brechin, said at the time: “We are all extremely delighted. We have been planning for these Games for 10 years. We have publicised our plans both at home and abroad. Today was the climax – and what a wonderful climax.”

But it was only just the beginning. A track and field stadium was to be constructed at Meadowbank at a cost of £2.8 million and on 2 May 1970, it was opened by Prince Edward, Duke of Kent. The opening event was an inter-area match in front of 15,000 spectators, the Scottish women winning the Claude Grahame-White Trophy for the first time.

On 16 June 1970, the team was announced. 57 athletes were named, the largest ever squad to be selected to that date, ahead of the 38 athletes who represented Scotland at the 1958 Games in Cardiff. Success does not necessarily follow size – that Cardiff team brought home zero medals.

High jumper Crawford Fairbrother, going into his 4th Games, was named team captain, but not everyone selected made it to the Games. The young David Jenkins, who would go on to be European Champion in 1971, had to withdraw injured from the 200 metres; and John Robertson (400m) from Exeter pulled out due to work commitments. Neither was replaced so a team of 34 men and 21 women would appear as Scotland’s representatives in the athletics events.

The opening ceremony was held on 16 July with the opening events of the athletics taking place on Friday, 17 July. At 2 pm the qualifying rounds of the men’s high jump and 100 metres took place. The first Scot to appear in the field was, fittingly, the team captain, but it did not go well for the experienced Fairbrother and he failed to reach the final. The first track Scot was Bellahouston Harrier, Ian Turnbull, who qualified from heat 2 of the 100 metres.

Medals were not up for grabs until the following day, the first Saturday of the Games, and the first Scottish medal came in the first final. The only event to be held in the morning, the 20 Miles Road Walk did not finish until the afternoon, with a 25-year-old London policeman, Bill Sutherland, winning the bronze medal.

Day 1 gave Scotland the boost they needed for the rest of the Games when Rosemary Payne and Lachie Stewart triumphed to give Scotland two gold medals, already more than we had won at any previous Games. No female Scottish athlete had ever won a gold medal in the history of the Games, the only success being at the 1934 Games where the 660 yards relay team won a bronze medal from a field of 3 teams. Rosemary Payne put this right from her first throw in the discus of 53.18 metres, improving to 54.46 in the second round to win by over three metres. She may have been the first Scot of these Games to win the gold medal, but she was not even the first in her family, husband Howard having won gold for England in the hammer two hours earlier!

The joy for Scottish fans was followed by the success of Lachie Stewart in the 10,000 metres, overcoming the great Australian, Ron Clarke, and England’s Dick Taylor.  In the words of Ron Marshall, writing for the Glasgow Herald, “As they sped past the scoreboard, 200 metres to go, Clarke tried to open up a gap and Taylor hesitated momentarily. Stewart was ready. He pulled neatly into second place, sized up Clarke coming off the crown of the bend, and then roared into an unbeatable overdrive up the home straight.”

It was one week later, 25 July, that Scotland won two more gold medals.

The final day of the Games was a cracker. The Commonwealth record holder Phil May set a new Games record in the triple jump; 17-year-old Canadian Debbie Brill won the high jump with Moira Walls 3rd; a second gold for Canada’s Dave Steen in the shot; and then, on the track, we had the women’s 800 metres final. The race was decided by fractions in a blanket finish in which a tenth of a second covered the three medallists, with Scotland’s Rosemary Stirling winning from England’s Pat Lowe, both given the same time of 2:06.2. On automatic timing, the three places were 2:06.24, 2:06.27 and 2:06.33.

The memorable race of the Games and, for some of us, one of the most memorable of all- time, saw a 5000 metres field containing all three medallists from the 10,000 metres, the gold and silver medallists from the 1500 metres (the great Kenyan and Olympic champion, Kip Keino, and the New Zealander Dick Quax), the 1966 bronze medallist Allan Rushmer of England, and, of course, our own Ian McCafferty and Ian Stewart joining Lachie.

It was the last individual track race of the Games and it boiled down to a powerhouse last lap, run in 55.4 seconds, and it was two Scots against the all-time greats of Keino and Clarke. Carried to the line by a euphoric 30,000 crowd, a Scottish 1-2 of Ian Stewart and Ian McCafferty, Stewart’s winning time of 13:22.8 being a new European record, only ever bettered by Clarke’s four-year-old World record of 13:16.6. If one wanted to stage-manage a finale to these wonderful Games, this was it.

These were a great Games, undoubtedly the best yet of the Commonwealth Games, from the flawless opening ceremony to the lively, friendly closing one. There was so much to savour in between – the sprint doubles from Jamaica’s Don Quarrie and Raelene Boyle of Australia, the marathon victory of Ron Hill, the English hurdles wins of David Hemery and John Sherwood, the Welsh long jump victory of Lynn Davies, the Irish pentathlon success of Mary Peters and, of course, the women’s 400 metres, won by 20 metres in a new World record time of 51.02 by the 17-year-old Londoner, Marilyn Neufville, running for Jamaica.

Scotland finished with 4 gold medals, 2 silver medals (Jim Alder in the marathon, Ian McCafferty’s 5000) and 2 bronze medals (Moira Walls in the high jump and Bill Sutherland’s road walk), a medal tally that had been bettered by the 10 medals in 1934, 8 of which were bronze, and which would be bettered by the 10 in 1982, but the 4 gold medals remains unsurpassed. A further eight 4th places were achieved and, in total, there were 37 Scottish placings in the top eight, almost double the tally that would be reached at the 2014 Games.