The scottishathletics Performance Foundations (PF) programme is the next stage in the performance pathway, following on from the 4J Studios National Athletics Academy.

END_OF_DOCUMENT_TOKEN_TO_BE_REPLACED

The purpose of PF programme is to provide a structured and supportive pathway for Scottish athletes & coaches, to help increase retention and maximise potential.

We work in partnership with British Athletics, the sportscotland Institute of Sport (SIS), Commonwealth Games Scotland and other partners to aspire to achieve the following outcomes:

As part of the PF programme athletes will undertake a needs analysis process to help understand what service support will prove impactful on their development in the season(s) ahead.

These service support areas include:

These service support opportunities are not a given and while we recognise the right support, with full engagement from the athlete & coach pair, at the right time can be very effective in helping performance develop and progress.  From experience we also recognise that they are not ‘magic bullets’ in isolation or without commitment.

Athletes will be considered for inclusion in the PF programme based on their performances up until the end of the summer season and the programme runs annually from December till December. 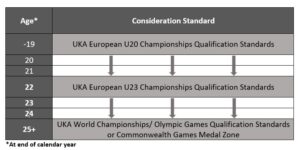 Para athletes will be considered for the PF programme if they are on the British Athletics Futures Programme or on the World Class Plan.

For further information, contact the Performance and Coaching Team.