Why I love being a Volunteer 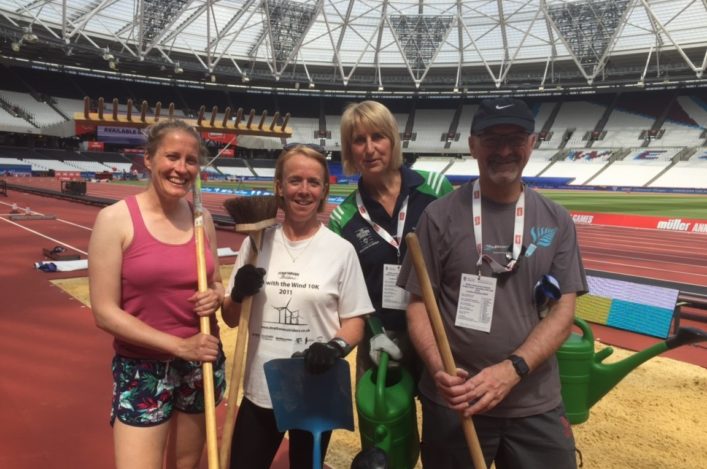 We keep saying and it and don’t tire of saying it: the sport of athletics can’t survive without the assistance of our dedicated Officials and volunteers.

At every level from the start of the pathway at clubs to elite events in the Diamond League and Olympics, there’s always someone required to lend a hand.

Carolyn McKinnon ‘joined up’ as a volunteer only a few years ago and already she describes it as a ‘life-changing’ experience and something she expects to be doing for the foreseeable futue.

We asked Carolyn to answer a few of our questions about Why I love being a Volunteer?

Why did you get involved?

I’ve always loved sport – of any kind. I was a keen runner at school. I swim, ride, ski. I’ve tried tennis and golf and badminton. I may not be very good at them all – but it’s about the taking part for me.

So I remember clearly being with my family and friends when the 2012 Olympic torch coming through Clarkston and watching the volunteers on that day absolutely beaming as well as the crowds getting carried along on the euphoria and at that moment I knew I wanted to be part of ‘that’ from a personal point and not just a spectator point.

What kind of things have you done so far and how was the volunteering experience?

How long have you got?

I have marshalled at more road races in Glasgow than I can remember over the year but my first big volunteer role in sport was as a Glasgow Life Ambassador for 2012 and being a way finder for people coming to the Olympic football at Hampden.

Whilst not one of the biggest Olympic venues the buzz and excitement around the event was so much fun. People from all over the world were in my city, on my doorstep and loving the Scottish hospitality and humour . . . just possibly not the weather so much!

Since then I have had many volunteer roles; here are a few:

Commonwealth Games – Pre-Games Volunteer Interview & Trainer then at Games time, a Field of Play Team Leader. To date probably one of THE best experiences of my life. The people I’ve met and the opportunities to learn new skills have all added to the overall feeling of achievement.

I’d never seen a competition hurdle up close – now I’m a bit of a pro and preparing and laying out a full flight of hurdles in record time! Best moment of the entire competition? Walking off the track to a full to capacity crowd singing ‘500 Miles’ by The Proclaimers. 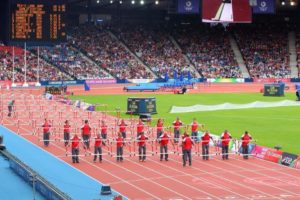 Clearing the hurdles at Hampden

Scottish Athletics Indoor & Outdoor Season – I came along to volunteer in 2014 to get an insight into how athletic events work from Declarations through to the medal ceremony before the big event that summer.

Who knew there were so many stages? I have helped out each season (mainly indoor) since then and I have marvelled at the development of some of our young people who have grown in strength and confidence through sport.

They don’t all win – but they all try. Working alongside the SA Official has also been great fun. I’ve learned a lot about rules and regulations, challenges and achievements and I hope to keep learning and developing my knowledge in the years head.

With the knowledge of the events and many of the people who also volunteer I have built a network of like- minded people and we come together as team to get the job done. It’s not always easy but that would be boring.

I’m off to the Diamond League event this summer at the Olympic Stadium to work and meet up with friends, then we’re back again for a fortnight for the IAAF World Championships in August! Beyond excited and proud to be part of the event.

What do you think others may enjoy it, learn from it or contribute?

By human nature most people like to contribute and see an end result.

I think if people came out to volunteer more and could see that their input helped make an event run more smoothly, they would feel they’d achieved something personally.

Volunteering for me isn’t a ‘me’ activity it’s a ‘we’ activity. We made that happen, we did that we’re going to do this!

Yes, there are times when you have to do things on your own and you may get some personal praise for that; but there is nothing better than that group feeling of pulling together to make something better.

I have worked alongside many experienced volunteers and many young people who are volunteering for the first time.

Both groups have something to offer. Sometimes however I think some of the young people in our communities think that they need ‘experience’ to volunteer. if only they knew they just needed to be willing and available. 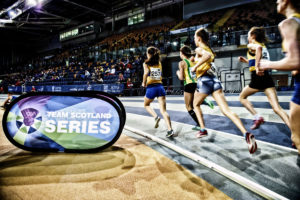 There is a bit of a feel-good factor at the moment around our Events – do you think being part of that can make helping out fun for those involved?

Without a doubt. Glasgow is still riding on the crest of the Commonwealth Games 2014 wave. However, there have been so many other big events in the city like swimming, gymnastics, badminton, cycling etc and that has allowed many more new people to join the fun.

I love coming to events and seeing familiar faces, but I also like working alongside new people who bring new chat and experience to the event. I do think however, that having the same faces at the big events can be a intimidating for new volunteers and people need to be mindful about that.

I love to learn and I love meeting new people so I can’t wait to see what else comes my way in volunteering: 2017 in London, 2018 European Indoor Championships in Glasgow. And. And. And.

Whatever happens, volunteering with be part of my life for the foreseeable future . . .

Inspired? Check out our Become a volunteer page.

Thanks, Officials . . . as those newly qualified are confirmed