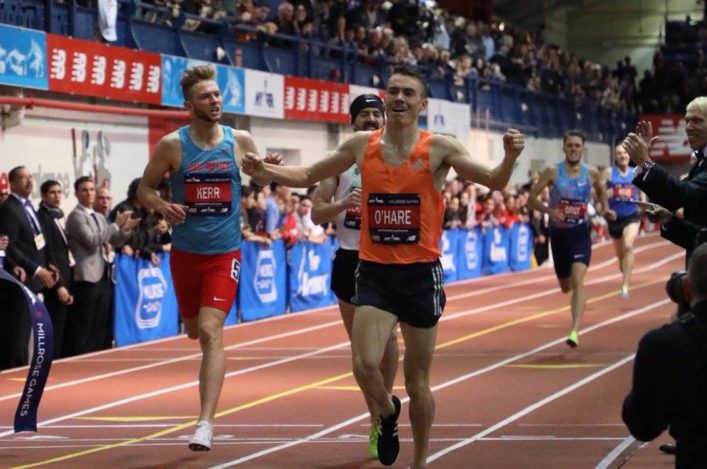 Chris O’Hare won the prestigious Wanamaker Mile at the NYRR Millrose Games, becoming the first British man since John Whetton in 1965 to claim victory in the race.

Clocking 3:54.14, the 27-year-old led a Scottish one-two on Saturday night as he was followed over the finish line by Josh Kerr, the two-time NCAA champion moving from 53rd to fifth on the UK indoor all-time list with his PB of 3:54.72. Josh is now third on the Scottish all-time list indoors.

Ahead of his season opener in New York, O’Hare had told Athletics Weekly how he was “ready to roll” and also looking forward to seeing his wife Meredith and 16-month-old son Ronan after having spent the past month at a training camp in Flagstaff.

Following his victory, O’Hare was joined on the track by Ronan and the Wanamaker Mile trophy.

‘It’s a prestigious race,’ said Chris. ‘So to get your name on that trophy is pretty special.’

Kerr had also spoken of strong current form pre-race and that was demonstrated in his fine run for the runner-up spot. 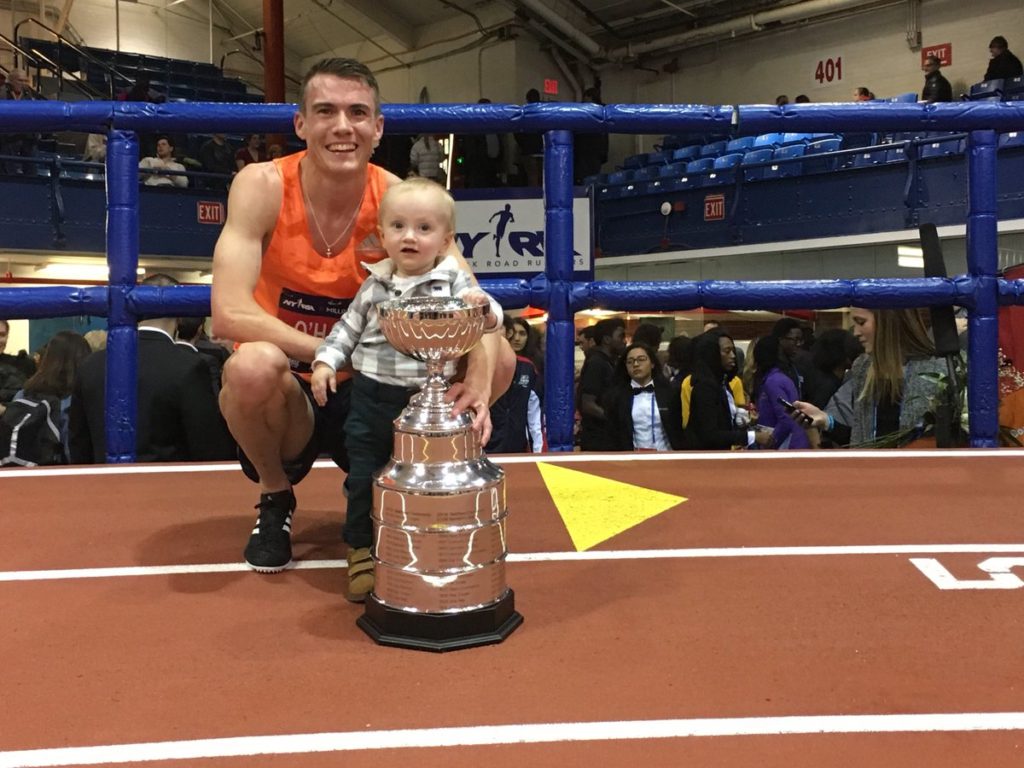 Two-time Olympic medallist Nick Willis – who had been on the hunt for his first title in six attempts – placed fifth in 3:57.72, one place ahead of Kyle Merber.

Edinburgh Uni Hare and Hounds women were desperately close to the medals at the BUCS XC Champs in Uxbridge, west London, over the weekend.

Mhairi Maclennan finished seventh and Steph Pennycook in 12th place with the Edinburgh points tally 44 the same as bronze medallists Birmingham, the Scottish outfit losing out on count-back, with Naomi Lang at 25th and Anna Macfadyen at 27th.

Luke Caldwell was the best-placed Scot in the men’s long race, in sixth place in 33.21, with comeback man Alex Yee taking the win. Further down, in what is always a race with good depth, Tristan Rees was 27th and Euan Gillham 33rd.

The Glasgow Pole Vault School GP series moved on to Pitreavie indoor centre for their fourth meeting of the winter.

Dylan Thomson, from Pitreavie, cleared 4.40m for the best height of the day with three athletes all at 3.73m – Ian Coghill of Inverness Harriers, Anna Gordon of Edinburgh AC and Giffnock North U17 Reuben Nairne.

Thanks to all athletes, coaches and Officials who supported this latest meet which supports the event specific principles.