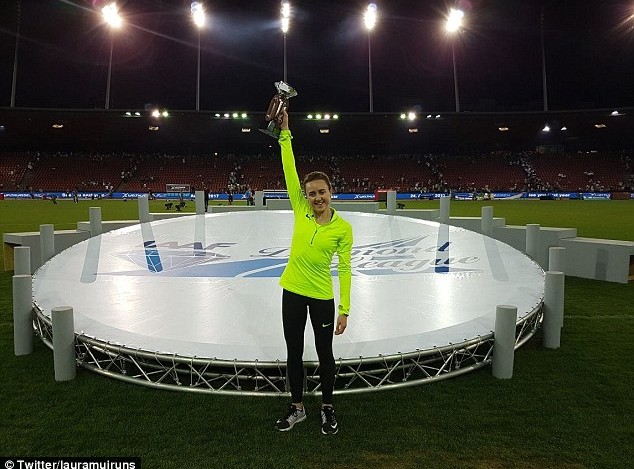 Laura Muir crowned her remarkable end to the season with a Diamond Race overall title win in Switzerland.

The Scot became only third British woman to ever win one of the Diamond League season events as she scored the most points in the 1500m – finishing above Olympic champion, Faith Kipyegon.

Muir was pipped for the victory on the night in Zurich on Thursday, when she clocked 3.57.85, but second place helped her to 40 points with the Kenyan, who came home in seventh in the Weltklass event, on 36 points.

Laura, who had broken the British Record for the second time in Paris the previous weekend, now has the three fastest British runs at 1500m of all-time – all of them faster than Dame Kelly Holmes.

The 23-year-old bolted past Olympic champion Faith Kipyegon on the final bend but was pipped by American rival Shannon Rowbury’s lunge over the line.

‘There is not really something I will need to improve for next year. I am the Diamond Race winner, this is big for me, because running in a Diamond League race is already something special for me.’

Eilidh Doyle leads the Women’s 400m Hurdles Diamond Race ahead of the final meeting in Brussels on September 9. Doyle finished third with 54.55 in Zurich – with that race not part of the points programme.

Lynsey Sharp came home in 11th place in the Women’s 800m. With the Diamond Race concluded in that event, Lynsey was placed fourth overall after a series of consistent performances that were quicker than her 2.00.55 last Thursday in Zurich.

Muir finished second in the Fifth Avenue Mile in New York on Saturday – less than 48 hours after Zurich.

American Jenny Simpson took the win in 4.18.3 with Laura at 4.18.5 in an exciting finish in the States. There was a fine run by Eilish McColgan for 12th place in 4.25.7 in her first road outing at the distance – with that time quicker than her mum (and coach) Liz managed on the track (at 4.26.11 on the Scottish all-time list).