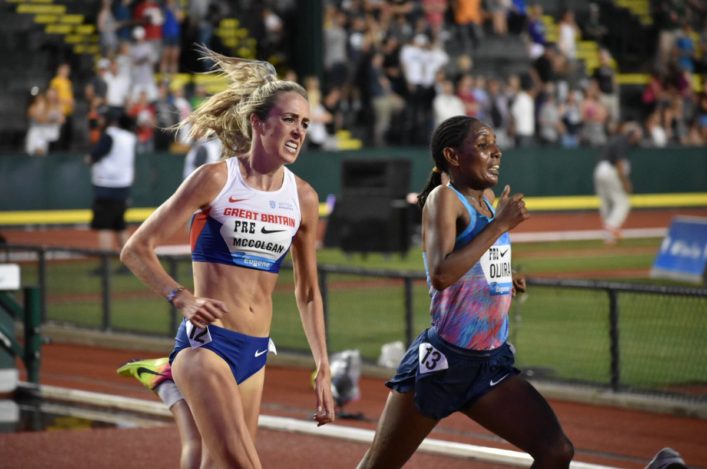 Olympic champion Faith Kipyegon took the win in 3.59.67 and Laura recorded 4.00.47 to finish third on the line with Hellen Obiri pipping the Scot for second place  by one hundredth of a second.

Muir was one of five Scottish athletes to feature in the Prefontaine Classic meet in Eugene, although not all were in actual Diamond Leauge races.

Eilish McColgan, on the Friday, came up with one of her best performances at this level when she took sixth place in the Women’s 5000m.

McColgan clocked 15.07.43 (just two seconds outside her PB) and that’s 15 seconds inside the 15.22 qualifying mark for British Athletics for the London 2017 World Champs.

Eilish already has the 10,000m standard, too, and the Eugene run takes her into second place in the ranking behind Laura Muir but above Laura Weightman (15.08.24).

There was a stacked men’s field for the Diamond League 5000m race at Eugene – and Andy Butchart came up with 8th place in 13.11.45 as Mo Farah won it.

Butchart’s time is just three seconds outside the Scottish National Record he set in Rio last year at 15.08.

The Scot clocked 3.53.34 for his PB outdoors and is third on the Scottish all-time list for the mile, behind Graham Williamson and John Robson. (Chris has a 3.52.91 indoors to his name, also)