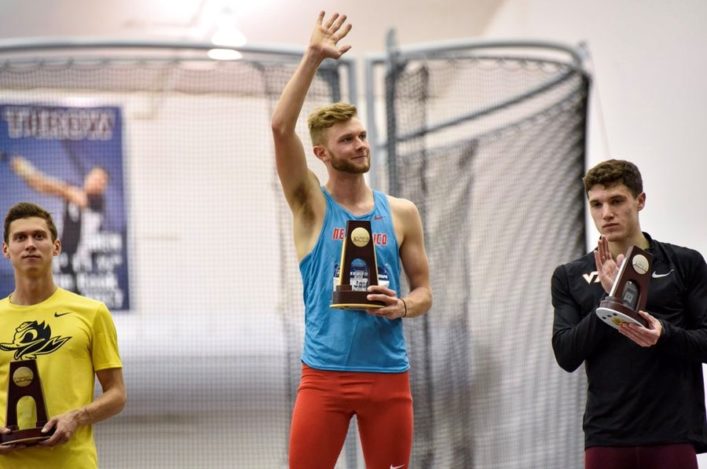 Josh on top of the podium in Texas (photo via Twitter)

Not only was it a successful defence for the New Mexico University athlete, who came through the ranks at Edinburgh AC, but it made it a hat-trick of consecutive NCAA titles – after he also won the outdoor 1500m in 2017.

Many congratulations from scottishathletics to Josh, his family and his coach and all at Edinburgh AC who played their part in his development over the years.

After becoming the first man since 2008 to  do that particular double, Kerr went into to the NCAA Division I Indoor Championships as the strong favourite and lived up to the billing.

The 20-year-old Scottish athlete had advanced comfortably from the earlier round on Friday and led the final from the off. He temporarily the relinquished the lead position halfway through before taking the front of the race again with three laps to go.

With 400m left, Virginia Tech’s Vincent Ciattei and Oregon’s Sam Prakel still had a chance of upsetting the favourite. However, as the bell rang the University of New Mexico student upped the ante and pulled away with a 26.71 final 200m to retain his NCAA indoor crown in 3:57.02.

Kerr, who competed for Great Britain at the World Championships in London last year, is the first male athlete to win back-to-back NCAA mile crowns since Lee Emanuel in 2010.

For Giffnock North AC athlete Gourley there was the considerable consolation of having already claimed a team goal with Virginia Tech in the Distance Mile event. Neil was on the final, 1600m leg of the relay.