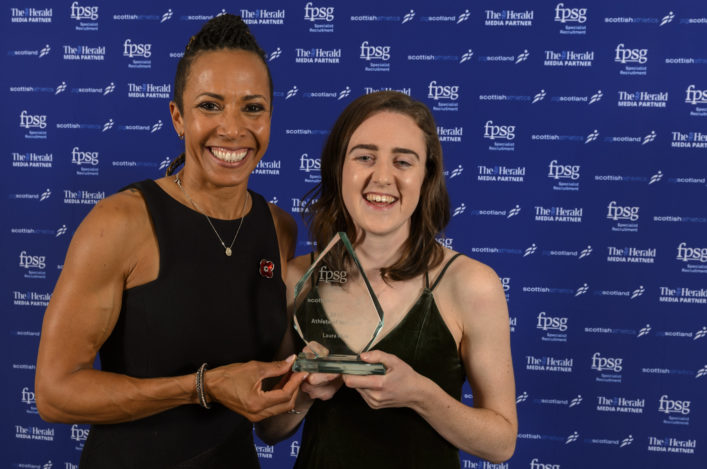 Laura Muir is our FPSG Athlete of the Year after a thrilling 12 months for the endurance runner from Kinross.

And Fifer Derek Rae claimed the FPSG Para Athlete of the Year award at a glittering ceremony on Glasgow on Saturday night.

Dame Kelly Holmes helped make the presentations as Guest of Honour at the scottishathletics and jogscotland FPSG Awards Dinner at the Hilton Hotel.

It was also a great moment for some of the best-known names in the sport – as scottishathletics announced 15 new inductions to our Hall of Fame.

Muir was a richly-deserved recipient in the main category after a year in which she rose to a heady No 1 ranking in the world from the IAAF.

Holmes has lost British Records to the Scot over the past couple of years but couldn’t disguise her pleasure in making the award to the 25-year-old from Dundee Hawkhill Harriers – who won a medal double at the World Indoors in Birmingham in March and then claimed the European title at 1500m in Berlin.

‘I am thrilled to win this title again and every year it seems the opposition is even stronger – because so many Scots are performing on the world stage,’ said Laura.

‘It was such an exciting year for me. There were a few highlights but if you push me I would pick out Berlin and the European 1500m gold. It was my first international medal outdoors and I really wanted to win that one.’

It’s the third time Laura has won the Scottish Athlete of the Year crown, following success in 2015 and 2016, and her coach, Andy Young, made it a double by collecting the Performance Coach of the Year award.

Fife AC athlete Rae for his part was a gold medallist in his T45/46 category at the IPC World Cup at the London Marathon back in April and continues to set PBs at various distances. 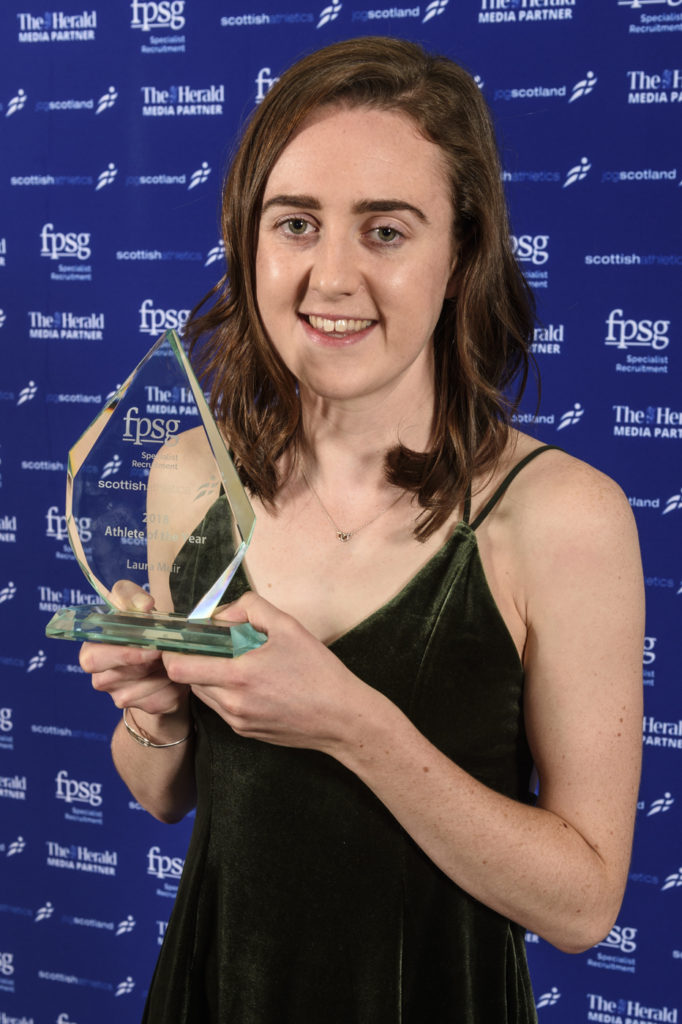 ‘Laura Muir has had a cracking year and I was delighted to present her with the FPSG Scottish Athlete of the Year award,’ said Dame Kelly.

‘I think a World No 1 ranking for the Women’s 1500m from the IAAF, on overall performances  through the season, says it all about Laura’s 2018, really.

‘The World Indoors in Birmingham in early March set her up for the rest of the year.

‘To win two medals in three days with a bronze in the 3000m followed by a silver in the 1500m was a great achievement – and especially when snow and ice made travelling so difficult in Britain that week!

‘I think that boosted her confidence even more for the European Championships and she dominated that 1500m final to win well in Berlin. To then go and win the Diamond League final in Brussels really was the icing on the cake.’

Stephen Maguire, Director of Performance and Coaching with scottishathletics, said: ‘I think Laura has had an absolutely outstanding year on the track – more than outstanding, in fact.’

‘She can look back with a lot of pride on a year when, indoors and outdoors, she confirmed her place in the very top echelon of women’s 1500m runner. Winning the Diamond League final, in a line-up which was worthy of the Olympics or the World Champs, only served to under-line that.

‘And, when it comes to women’s 1500m running, we have to be aware that it is the strongest era there’s ever been.’

FPSG Athlete of the Year