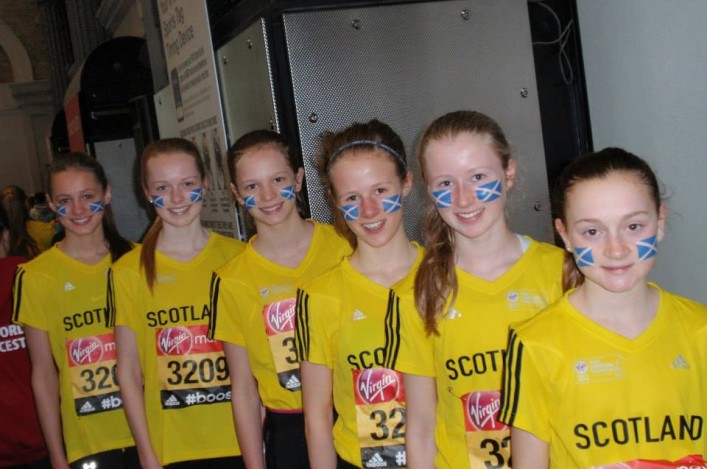 Scotland U15 girls savoured the Mini Marathon event in 2014

The annual trip to the London Mini Marathon is undoubtedly a calendar highlight for our best teenage road runners – with two dozen picked to represent Scotland this Sunday.

But while 23 of the U15 and U17 teams make the long coach journey south on Saturday, the travel arrangements for Euan Campbell are a little different.

The Belgium-based Scot, who helped Stornoway RAC to third place at the National Cross Country in Falkirk in February with his own bronze medal performance, will head through the Euro Tunnel as he makes his way from Brussels to London.

It will be an exciting moment for the 17-year-old as he represents Scotland for the first time at any level.

‘We have lived in Belgium for seven years and Euan’s running started at school here,’ explained Euan’s dad, Ian.

‘The Stornoway connection comes via his grandmother, who was from Lewis but sadly passed away a couple of years ago. We were over a couple of times and trained with the club and one of the coaches, Ross Munro, made Euan feel very welcome.

‘He competed at the Age Groups last year in Aberdeen and at a couple of other events while unattached but we then learned he could join Stornoway and run for them. It worked out well at the National XC when the team finished third at U17 and Euan himself won bronze. We’ll be over again this summer and may be at the 3 x 800m Relays.

‘He’s been involved in road races here in Belgium so  he is really looking forward to London. Myself, Euan and his mum (Susan) will head off on Saturday morning and drive from out home in Flanders to Calais and then take the tunnel to England and carry on to London.

‘We will take Euan to the college where the Scotland teams are staying on Saturday evening and then we will be there on Sunday morning trying to catch sight of him as they run past. It should be a great weekend and this is his first time representing Scotland in any way because obviously there’s not been an opportunity with Scottish Schools or anything like that.’

Central AC’s Kate Gallagher and Fife AC’s Adam Scott were the best Scottish individual performers last year in terms of places and they return again this weekend – both with a second year at U15 level. There were two fourth places for Scotland teams in 2014.

In that U17 Men’s team, the likes of Edinburgh AC’s Joe Arthur and East Kilbride’s Aidan Gilbride will look to feature prominently after finishing highly at Greenock in the Junior Road Races.

Since the teams were announced by scottishathletics around a month ago, there have been a couple of changes with congratulations now due to the following three girls on selection:  U15 Girls – Sarah Tait (Lasswade); U17 Women – Mary Macintosh (Nairn); U17 Women – Heather Addison (East Kilbride AC); U17 Men – Thomas Otton (Gala Harriers).

Well done to all the athletes, coaches and families involved and good luck to all those heading for London.

*Four Scottish athletes will compete at the wheelchair races which take place as part of the London Mini Marathon event on april 26. They are: Shelby Watson, Kyle Brotherton, Luke Deighan, Callum Sloan.

Here’s a video package about the London Mini Marathon event: