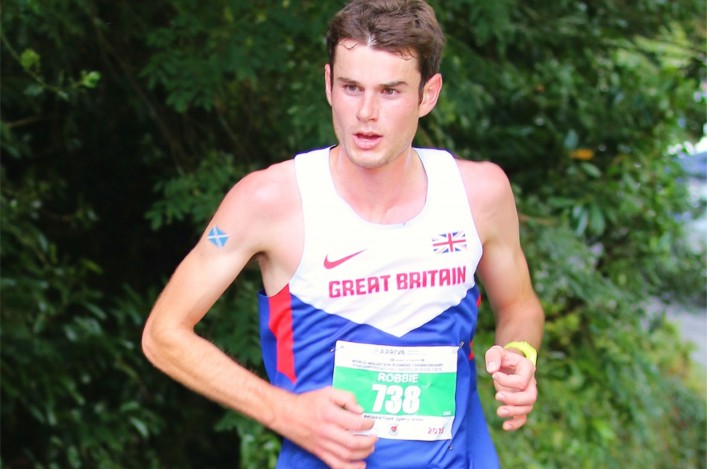 The Elite Men’s start-lists have now been published for the Virgin Money London Marathon in April – and there’s a place for Scottish athlete Robbie Simpson.

The GB hill running international has turned his focus to the road in the past year or so and with 2.15.38 in London last year is now looking to make the Scotland qualifying standard for the Commonwealth Games in Gold Coast 2018.

Details on the Men’s Elite lists for London are online on Athletics Weekly site . We wish Robbie well in his preparations . . . 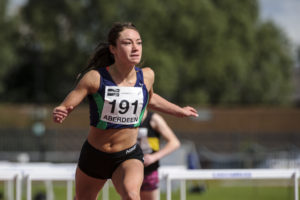 From Holyrood to Holly McArthur: the feel-good factor in athletics in Scotland crossed the border on Saturday evening as news reached us of a fine Combined Events performance in Sheffield.

National Academy athlete Holly McArthur claimed gold at the England Athletics Champs in the U20 Pentathlon with a score of 3804 points.

That was above the qualifying standard being asked for GB representation and Holly thus claimed an automatic selection for an international event in Prague next month!

Holly, who came through the ranks at Whitemoss AAC and now competing for Edinburgh AC, is coached by Iain McEwan. Congratulations to both athlete and coach as well as Holly’s family on a fine performance in Sheffield.

That was followed the next day by a silver medal in the U20 Heptathlon for Edinburgh AC athlete Howard Bell.

Howard, another of our National Academy members and also coached by Iain, scored 4999 points to claim the silver by 17 points.

Well done to athlete and coach and all helping with Howard’s development. Read more on the England Athletics website. 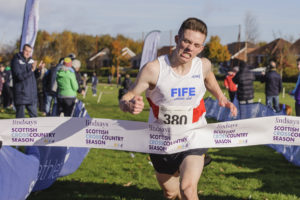 There was also a BMC meeting at Sheffield and the good news keeps on coming at the start of 2017 for National Academy athletes.

Adam Scott (Fife AC) clocked an indoor PB for the 1500m at 3.53.31 which is inside the 3.55.10 qualifying standard for the Commonwealth Youth Games in the Bahamas later this year.

Many congratulations to Adam, his family, coach Steve Doig and all at Fife AC contributing to his development. Adam’s result detail is online

* At the Scottish 3000m Champs at the GAA Miler Meet last week, both Adam Scott and Erin Wallace were inside the required times for the 3000m for CYG Bahamas 2017. 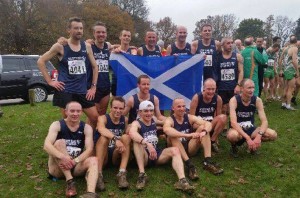 Scottish Masters XC athletes at Nottingham a couple of years ago

There’s always a special atmosphere at the Scottish Masters XC Championships and we feel sure the 2017 event will be no different.

And, with the Scottish Veteran Harriers Club having staged a very successful British and Irish Masters XC event in Glasgow in November which included a strong open race, it’s hoped there will be large fields when Scottish championship medals are up for grabs.

Races are over 6K for Women (over 40) and Men aged 65 and over and at 8K for Men (over 40) from M40 through to M60. Age on race date is the qualification and you must be a scottishathletics member to compete in this event. 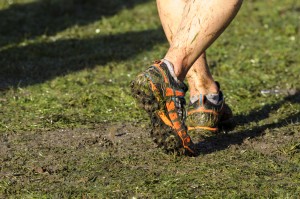 The Glasgow Athletics Association continue to stage their annual series of cross country sessions through the winter – with the latest session this Saturday at Bellahouston Park.

Following the first three sessions, two dates remain set aside for now for athletes, clubs and coaches to ear-mark as part of their preparations towards the National XC at Falkirk in February – which marks the culmination of the Lindsays Cross Country Season.

These sessions have become increasingly popular for all ages and offer the opportunity for athletes to enjoy training in a group and for coaches to meet informally. scottishathletics fully supports these principles.

Dates and venues are listed below. All athletes should be warmed up and ready to start the session at 10.30am sharp.

For more information on the sessions, please contact glasgowathleticsassociation@gmail.com

Five more drawings of top Scots to colour in!