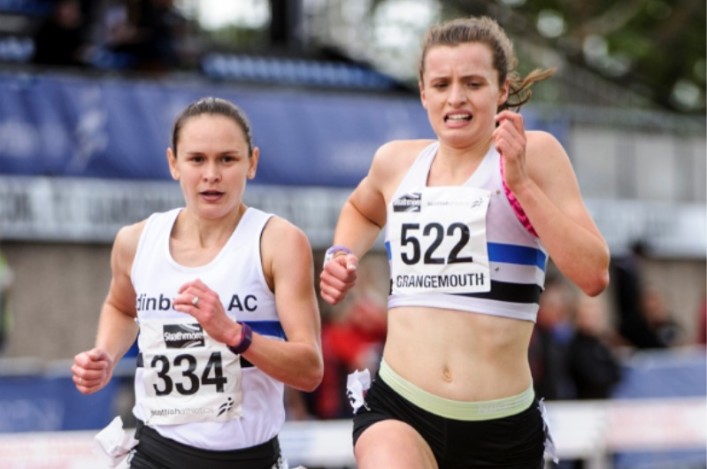 Olympian Freya Ross claimed her first National title on the track for six years at the Scottish Senior and U17 Champs at Grangemouth.

The London 2012 marathon runner still has her sights set firmly on road running but was happy to top the podium at 5000m – just as she did back in 2010 prior to track appearances at the Commonwealth Games in Delhi that year.

Ross, 32, was one of a number of familiar names among those to claim Senior titles on day one of the Champs at Grangemouth, with that list including the likes of Kirsty Yates in the shot, Greg Millar in the javelin and Chuxx Onyia, with a PB,  in the triple jump.

There was a ninth Senior gold in the discus for Glasgow 2014 athlete, Kirsty Law, with a throw of 52.64m stretching a remarkable run of consistency by the Inverness Harriers athlete, while the men’s hammer was claimed by Andy Frost with 63.31m.

‘It was nice to win a Scottish title again on the track but I’m still a marathon runner at heart,’ grinned Ross, after pushing beyond Edinburgh AC club-mate Louise Mercer on the last lap to win in 16.56.65 in windy conditions.

‘I live a couple of minutes from here and it would be easy enough to do track sessions but my focus is on the road.

‘Having said that, it felt good to win and it was definitely a more comfortable run for me than the Miler Meet at Crownpoint a couple of weeks ago. Louise was in her first track 5000m and fair play for her for taking it on the way she did.

‘She opened up a bit of a lead on me at one stage but I realised I was cutting it a little with each lap towards the end. Louise looked back over her shoulder a couple of times and that maybe told me she wasn’t expecting to hang on. Still, it felt good to kick beyond her at the bell and win.

‘Obviously there are some top Scottish endurance athletes in Rio but when you compete in a championship you look to try and win. I think I’ve only one previous 5000m track title and this one certainly does mean something after all the injury issues that I’ve had over the past two years or so.’ 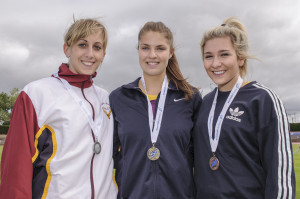 High jumper Nikki Manson (pictured above) saw off the challenge of Rachael Mackenzie to win gold with 1.78m – and she could now represent Scotland in midweek at the Manchester International.

‘I was pleased to win the title because I was second last year at Aberdeen,’ said Nikki.

‘I am slightly disappointed with my jump because I was hoping I could get to 1.83m today. But I’ve had to settle for 1.78 and I guess in championships it is about trying to take the gold.

‘I’ve been offered a place for Scotland at the Manchester International in midweek and will have to think it over – because I am off to America next Saturday. I am going to Akron University in Ohio for a two-year Masters degree.

‘It is all very exciting for me but a wee bit nerve-wracking at the same time. There’s an athletics scholarship involved, too, so it should be great for my high jumping. I will be back at Christmas and should be back next June and would plan to do the British outdoor season – hopefully I will be able to defend my Scottish title, as well.’ 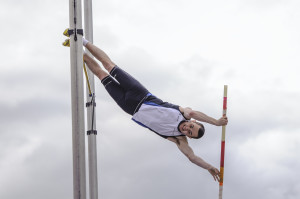 ‘It was my first comp back this year because there’s nowhere to compete while I am at Uni, I come back to Glasgow when I can for training. My outdoor PB is 4.60m but with the wind today that probably wasn’t going to happen.’ 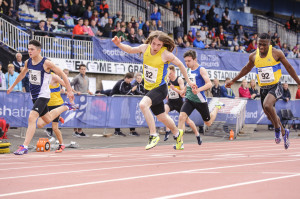 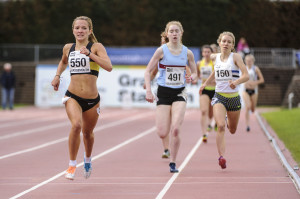 Check out all of those Results on the link at the top of the story.