Scots in Beijing – in their own words

The World Champs  are set to being in the early hours of Saturday morning.

There are seven Scots with the GB squad in Beijing, of course, and we’ve selected here a number of comments from each of those athletes to give a flavour of their excitement and anticipation during the preparations.

With thanks for these interviews to British Athletics, Mark Woods, Susan Egelstaff, Susan Swarbrick, Doug Gillon and Euan Crumley. 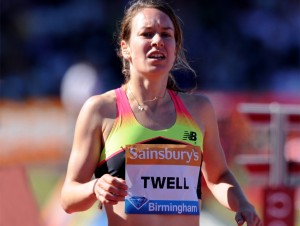 ‘The period I was out injured really tested my mental strength. It brings on doubts and it really dents your self-confidence.

‘I learned things about myself that I feel I am now taking into training and taking into races and now I have the confidence that I know how my body works; I feel like it is translating well into my races. I feel now I have the determination and drive that you need to do well.

‘I am already on the pathway to Rio and this exposure this season to the likes of the Diamond League and now Beijing is just what I need. Some of my training this year has already been with a view to improving more for next year.’

‘Being left out of the Olympics in 2012 definitely gives you an extra edge and the extra desire to prove you can make it at that level.

‘For me, going to the World Champs in Moscow in 2013 was about proving to people that I should be there and thought about as more than someone who-will-just-make-the-heat kind of level.

‘I think it is fair to say I was selected in 2013 as an athlete with potential who might make the semi-final or might not. Now I’ve a couple of European medals and that definitely helps your case.’

‘That day at Loughborough when I broke the Scottish record was huge.

‘The record, my own PB and the qualification mark were all so close together that there was a chance it would all happen with one throw.  Much as I wanted the Scottish record, getting the World Champs qualifying standard was the most important thing for me.

‘In 2012, I felt I was in shape to break Chris Black’s record but I just couldn’t get it and I had a couple of years where I was trying to move forward but it didn’t happen. I changed things in my training last winter, though, and it has paid off.

‘I’m aiming to reach the final. Usually it takes about 74m or 75m and that’s my target. You have only got three throws so you need to be realistic. It will be great just to get into that stadium and get going.’

‘I have run consistently this year, and better, but in these higher quality races there’s been a lot of people and it has been scrappy. I haven’t got the pace judgement quite right.

‘I’m hoping it comes together for Beijing and I’ve a lot of confidence in my coach’s plan which has been geared to trying to peak now.

‘I am completely different person from when I went to the Olympics. Mentally and physically I have come on a lot since then; different coach and a good few years of training – as well as much more experience at this kind of level. I am definitely in as good a shape as I have ever been.’ 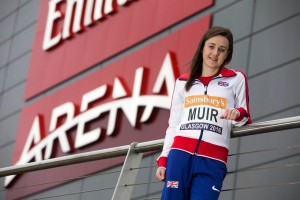 ‘The final is definitely where I should be. If I do not reach the final then I will be disappointed. That is my target!

‘I am a lot stronger now than I was (last year). We are building on the training each year and I am getting stronger as an athlete. I am becoming more confident and my racing tactics are improving I feel.

‘I guess because I used to train by myself an awful lot then I was not used to having people around me when I was running. That is the experience you have to pick up and I’ve done that over the past couple of years. Winning the Diamond League race in Oslo was a big one in terms of my own confidence.’ 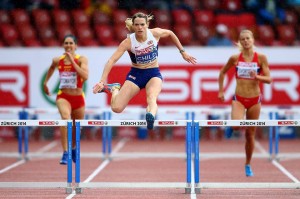 ‘I feel like I am in better shape this season than last season but last season I was more consistent.

‘I had my stride pattern nailed last year so every time I went out to race, I was running a good time. This year, because I am a little faster, my stride pattern has had to be adjusted slightly so when I’ve got it right. I’ve been running low 54 seconds but when it has been less smooth, it has bee high 55 seconds.

‘I never go into a major championships with a specific target – I don’t think about winning a medal or running a specific time. It is the old cliche of ‘I can’t control what others can do’ but it is true on these occasions.’

Kirsten on Twitter: ‘Beijing-bound. So proud to be a part of the 4 x 400m relay team for the World Champs.

‘I think she might move up in distance, judging by the time she did in a 600 recently, but she’s really strong over 400. The strength in depth of British women’s 400 running is just incredible, so it’s great that she’s been included – and included on merit.’

RT @BritAthletics: Next stop: Jerusalem 👊 The GB and NI young stars are heading to Israel this coming week for the European Athletics U18…