‘Rio medal is so special,’ Eilidh

Eilidh Doyle has labelled ‘special’ the Rio medal which helped her make history in Brazil.

Bronze with Team GB and NI in the Women’s 4 x 400m relay ensured the hurdler became the first Scot to land a medal in track and field at the Olympics since 1988.

It was also an 11th podium moment at a significant international event for Doyle to take her level with Yvonne Murray’s tally as Scotland’s most decorated athlete.

Endurance runner Murray won her medals in individual events but for Eilidh the Olympic prize ‘completes the set’ alongside previous medals at World, European and Commonwealth level.

Now, in a special blog post for scottishathletics, the Pitreavie AAC athlete reflects on Rio.

‘I was totally oblivious to the history factor in terms of being the first Scot to earn a medal in the Olympics since 1988,’ said Eilidh.

‘I only realised that later on that night when I had a look on Twitter. We were aware when we walked through the mixed zone that we had won the 66th British Gold medal, which topped the 65 from London 2012.

‘But it wasn’t until later that I found that out and I thought “Wow. That’s something special.”

‘That’s 11 now (to level with Yvonne).It is really nice when you hear a stat like that. Over the past few years, I have been consistent which is has been the key to my success. I’ve been very lucky that I have been relatively injury free in my career and have avoided serious injuries. 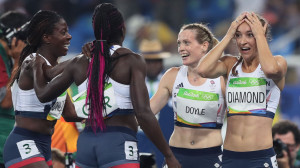 ‘I have always had good consistent training along with a good coach and physios which have made me very robust. I think I made my first senior team in 2009 at the World Championships in Berlin and I’ve made every single team since then, so to be an athlete that has gone six or seven years without injury I have been very fortunate in that sense.

‘Overall it was a really good Games, and I took a lot out of it. It was completely different from how I felt after London 2012. There I came away upset knowing I hadn’t run well.

‘Coming away from Rio I was delighted to obviously come away with a medal and satisfied with how I had performed in the hurdles.

I would have loved to come back with two medals, but I always said if I came off the track knowing I gave it everything that I wouldn’t be too disappointed. I didn’t do anything wrong or make any mistakes, but it just wasn’t enough to medal.

‘Having the relay not long afterwards actually really helped me a lot; I did have mixed feelings after the hurdles. I performed well and didn’t make any mistakes, but I was still a bit annoyed. Having the relay to focus on, to have another shot and realise that actually we can win a medal here.

‘It provided extra motivation to go out on the track and put in a great performance.

‘When you are running fast your confidence grows anyway, but a large part of that is trying to believe you are good enough as well when you are in the situations. I wasn’t really until the end of 2013 that I started running quicker and I thought I was reaching that level. 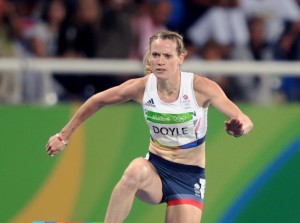 ‘These last couple of years I have tried to enjoy what I’m doing and why I do it, to perform well and run fast.

‘In London it felt like me and them, I didn’t feel like I was at the same level of some of the girls and that they were a lot better than me.

‘I remember being in the warm-up area having put some hurdles out to practice and one of the other girls had actually moved them. I didn’t move them back because she was one of the favourites to medal, and I thought she was faster than me.

‘Looking back I can’t believe I thought like that. Going in to Rio I felt like I belonged, I knew I was capable of beating my opponents. My whole attitude and confidence was completely different from four years ago. In London I felt totally out of my depth where as in Rio I was more assured of my ability.’

*Here’s an interview with Eilidh following second -place in the Diamond League in Lausanne, just after Rio. The 400m Hurdles Diamond Race final is coming up on Friday in Brussels.