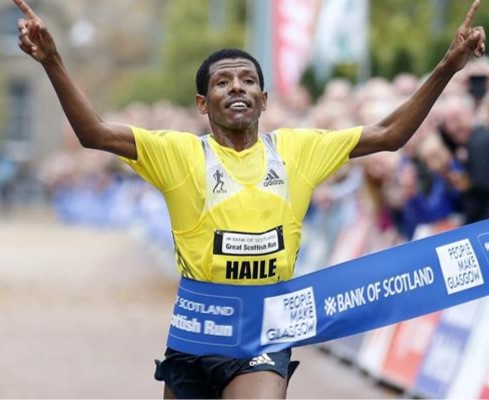 Haile Gebrselassie, widely regarded as one of the greatest distance athletes in history, will bid farewell to competitive running on the streets of Glasgow next month.

The Ethiopian, who has broken 27 world records in his illustrious career, will take part over the 10k distance on Sunday 4 October in Scotland’s biggest weekend of running.

Haile, 42, gained international recognition in 1992 when he won the 5000m and 10,000m races at the 1992 Junior World Championships in Seoul, and in a career spanning over two decades won major competitions at distances from 1500m to the marathon.

Coverage of the story on STV

As the winner of the Bank of Scotland Great Scottish Run half marathon in 2013, Haile is expecting a special day.

‘I love the city of Glasgow and the atmosphere in the city that weekend,’ said Haile.

‘It will be quite an emotional day for me as I say farewell to competitive running. Returning to this year’s event is a great opportunity for me to say thank you to the people of Glasgow by running the 10k.’

His participation will give runners the opportunity to join the legend in Glasgow, with the event still open for entries. To enter either the 10k or the half marathon at the Bank of Scotland Great Scottish Run check the event website. 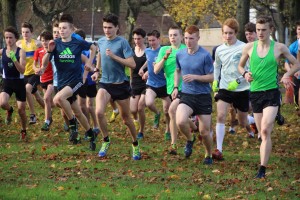 scottishathletics supports this initiative with the sessions offering the athletes from different clubs the opportunity to train together and for their coaches to meet and catch-up on an informal basis.

Athletes from U15 level upwards are welcome – with clubs urged to actively encourage attendance – and the full programme is geared to build towards the National XC in Falkirk in February.

Except during the Christmas break, the sessions take place on Saturday mornings and this year the first rep will be at 10.30am.
Here are the five dates and venues:

Details on the specific sessions and further information is available on the download. There are also guidelines for the length of session depending on the age and stage of the athlete. 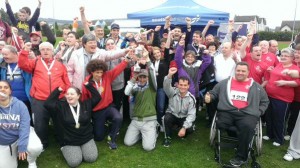 Team Fife retained the overall trophy; Jo Butterfield had a 21.78 club throw (in excess of European record but unratified and within 12cm of WR).

There was also a championship best performance by Meggan Dawson-Farrell over 800m and fast sprinting by Rhys Paterson of Dundee Hawkhill Harriers – with 11.5 for the 100m.

And there is some specific coverage from Perth emerging on some club websites like VP-Glasgow which is good to see.

With thanks to Ian Mirfin
+++ 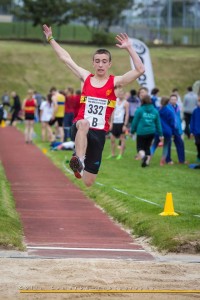 Over 200 young athletes gathered in on the Isle of Lewis on Saturday as Stornoway Running and Athletics Club hosted one of the biggest athletics events of 2015 outside the Central Belt.

It was the annual SRAC club invitation match, with five teams taking part this year. Among the visitors this year were the top two Scottish junior clubs in Edinburgh AC and Giffnock North AAC, who were joined by Corstorphine AAC and a select team from Uist.

Set up in 2011 when SRAC took on Corstorphine for the first time, it then grew in to the Tri-Club match in 2012. The brainchild of SRAC coach Ross Munro, the aim was to bring two mainland clubs to Lewis to give the local junior athletes top class competition at home.

And, of course, it also saves the Lewis club and Stornoway parents the expense of another trip to the mainland which they know about only too well!

However, it also gave the mainland clubs the chance to travel together, a chance to bond as a team, and enjoy some good island hospitality with their new Stornoway friends. The ceilidhs alone at these events have become legendary occasions . . .

‘We are growing as a club and so is this event,’ said Ross Munro. ‘The only athletics discipline we didn’t have covered this year was the pole vault.

‘It has actually reached the stage now where the clubs are getting in touch with us, and there’s almost a waiting list!

‘The clubs have come up here and and have had such a great time that they tell other clubs about their experience so others then want to come. And of course the clubs who have been also want to return again, as we saw happen this year.

‘A team trip is a unique and great, new experience for many and the travelling athletes, coaches and parents love that part of it!. We give the clubs a good, well organised event and a good weekend away. In return, we have a top class athletics match at home.’

With thanks to Seumas MacTaggart and Ross Munro 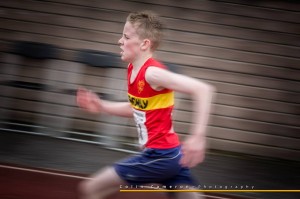