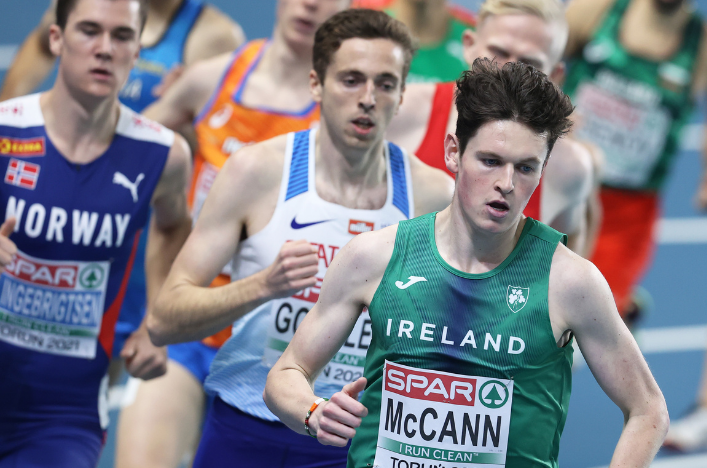 Neil in action in the semi-final on Thursday night . . . photo via European Athletics/Getty Images

Neil Gourley had to settle for 12th place in the Men’s 1500m final at the European Indoors.

Jakob Ingebrigtsen looked to have taken the title in 3:37.56 from home favourite Marcin Lewandowski with the 1-2-3 the same as at Glasgow 2019.

A DQ decision against the Norwegian for stepping off the track then saw Lewandowski – before a subsequent successful appeal from Norway ensured Ingebrigtsen did indeed win another European title.

Neil had to contend with a bit of pushing on shoving right at the start but did work his way forward to fifth place at one stage over the course of the race.

But he didn’t have the finish he wanted on the final lap as other athletes came through. Welshman Piers Copeland duly took fifth place.

Now the Scot will head back to the United States and look for the Olympic qualifying time.

We wish him all the best and say well done for reaching his second European Indoor final in two years.

Neil was typically candid afterwards as he admitted he didn’t start the race well enough to finish it in real contention, with that also the assessment of BBC commentator, Steve Cram.

‘I didn’t get it right and I’m disappointed with the way I reacted. Things like that can happen off the line and there was time to recover and I didn’t.

‘I worked too hard to get back to where I was but all the same I don’t know why I couldn’t at least challenge for a medal there. I should have been able to recover.

‘The pace was slow to begin with and then exactly what I thought would happen happened and they had to push it on. I needed to be there ready for that move and I was a good 30m back.

Neil had progressed to the final in fine style on Thursday evening.

Drawn with Jakob Ingebrigtsen in the third of four heats, the progression was only assured for the top two.

Neil was grateful thus for the race being taken out quite hard and he covered any moves to make sure he and the Norwegian favourite were well ahead of the rest on the home straight – with the Scot taking first place in 3:39.84. 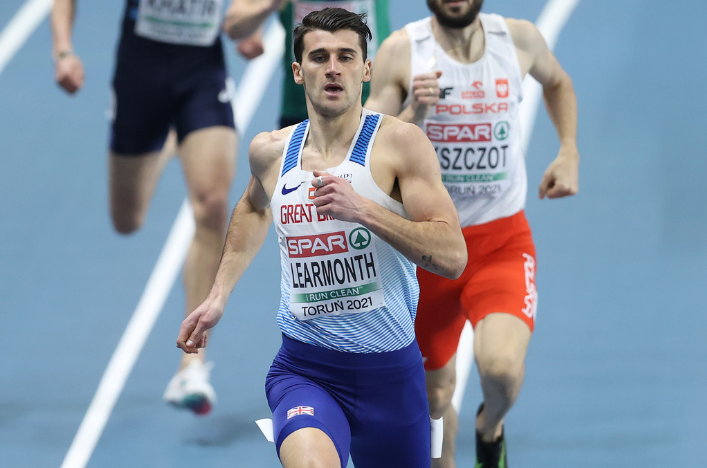 Schedule for five Scots with GB and NI

Guy Learmonth is competing at the European indoors for the fourth time and he was in action in the first round heats on Friday evening in what is a congested 800m field.

The Lasswade AC athlete had been drawn in the fourth of six heats with the top three to earn automatic progression to the semi-finals on Saturday.

And Guy duly took the win in his race as he surged to the front at the bell and pushed on hard to see off all the opposition and win in 1:49.66 in a process where only the top three would go through. Indeed, the highly-rated Pole, Adam Kszczot, had to settle for second place.

Guy said: ‘I wasn’t really too happy with my position, I was a bit stuck after the first six, but after seeing how slow the first 400m was, I knew I had to get out coming into the home straight with one lap to go, so I just got out and went.

‘I feel good and I’m ready for tomorrow now. I’m taking it one race at a time and my aim is to get through tomorrow and worry the final after that, but it’s going to be a good semi-final.

‘It was a nice easy race. The heats are always the worst, I hate them. I’ve been waiting around all day, so I’m glad it’s out of the way and now I can have fun.’

Well done to Guy, his family and coaching team on an excellent performance in Torun and good luck for the semis.