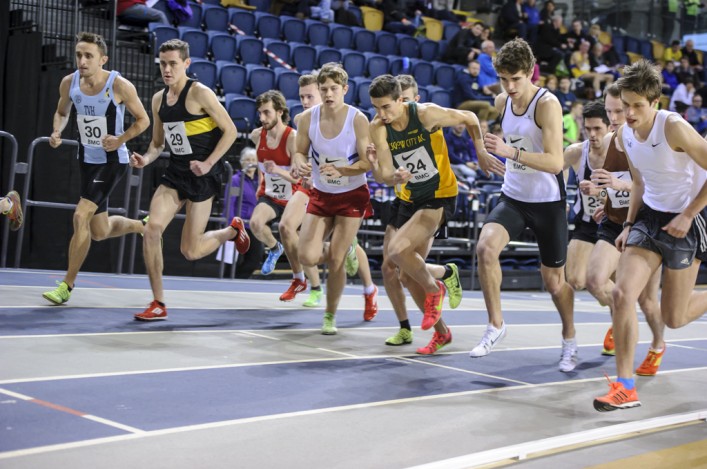 Laura Muir made a fine start to 2015 as she claimed the Scottish 3000m title at the GAA Miler Meet with a big PB at the Emirates Arena.

The GB international clocked 8.51.75 for a time that was only bettered by one British woman over the course of 2014 – Julia Bleasdale.

It has since become clear that Laura’s run, albeit in a mixed raced, bettered the Scottish Native Record and also puts her second on the GB all-time indoor list for U23 – behind only Zola Budd. The British Milers Club have confirmed Laura’s run as a BMC Members and All-Comers record for women over 3000m.

Sean Fontana took the Scottish men’s title at 8.18.96 as he held off the challenge of medallists Howell Craske and Myles Edwards in a good finish to the 3000m ‘A’ race.

Gavin McArdle won the U20 gold in that same race with a PB and there were bests galore over the course of the meeting as the GAA Miler Meet played host to Scottish national champs and a shot put competition which attracted three dozen entries.

Masters medals were on offer on Saturday, too, and there were familiar names among the gold medallists there via the likes of John Thomson at V55, Robert Gilroy at V35, Cath Ferry at V40 and Melissa Wylie at V45.

Muir was under the weather earlier in the week and was expected to miss out but recovered from cold symptoms and naturally was prety pleased with her run under those circumstances.

‘On Monday and Tuesday we were pretty certain that Laura would not be running but there was enough of an improvement for her to make it,’ said coach Andy Young.

‘To get 8.51 in those circumstances was pleasing and reflects the training this winter. Laura hasn’t run 3000m for a couple of years, with her last one also being in a mixed race at the Emirates.’

Josephine Moultrie (VP-Glasgow) took the silver with a run of 9.07.12 in the same race while Edinburgh AC’s Laura Dunn won the bronze with a PB of 9.27.34 in a different race.

Central AC’s Gillespie won the U20 crown with Fife AC’s Annabel Simpson and Kilbarchan’s Sarah Dempsey on the podium, too. Kilbarchan’s McArdle improved his PB by four seconds to win the U20 Men’s title with the other medallists being Craig Jardine (VP-Glasgow) and Euan Campbell (unattached).

At U17 level, Adam Scott of Fife and Erin Wallace of Giffnock North are often impressive at cross country and they translated that to track with good runs of 8.51.92 and 9.55.55 respectively. Sol Sweeney (Perth Strathtay) took U17 silver with James Donald (Dundee Hawkhill) third and the girls medallists in that age group were Kate Gallagher (Central AC) and Laura Stark (Kilbarchan). 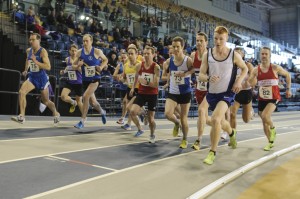 One of the Masters races – with pacemaker Jonny Glen

There were Masters medals up for grabs across the various age-groups and it there was a good turnout from athletes representing clubs the length and breadth of Scotland.

John Thomson, Scottish Masters Athlete for the Year for 2014, said: ‘I enjoyed it and I think the fact it was paced races helped people get better times. Sometimes in championships, everyone can be a bit cautious. I am happy with my own time and V55 gold as I am 57 in a few weeks.

‘I will be back here at the Emirates for the National Open and then the Masters track and field champs at the end of the month.’

(Rankings for each age group are given in the results. Note that there were Scottish Champ medals for U17, U20, Senior and Masters by five-year brackets – but not for U15 and U23, as was clear when the event was first publicised). 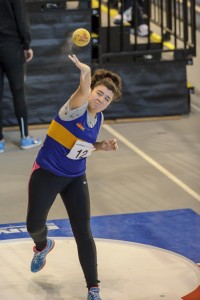 In the shot competition, discus thrower Angus McInroy came up with a PB performance of 14.79.

George Evans of Inverness made his trip south worthwhile with an indoor best of 16.95 and there were a string of PBs from many of the young athletes involved.

With 35 people taking part, it was an excellent start to 2015 for our throwers and they were watched by David Grevemberg, the now former chief executive of Glasgow 2014 and new head of the Commonwealth Games Federation, with his son Aiden taking part at U13 level.