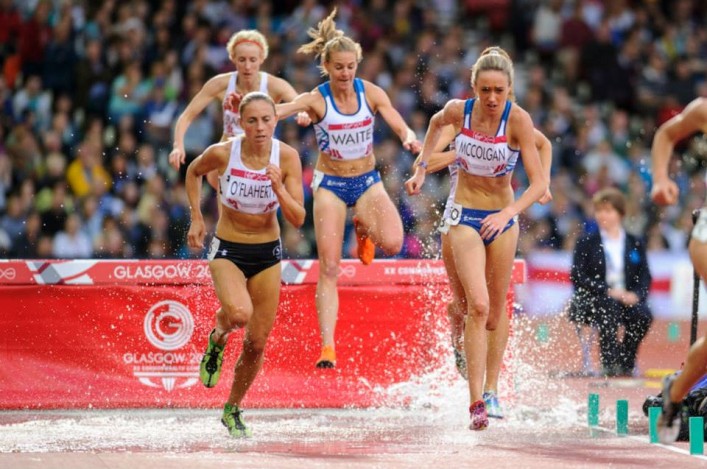 Eilish McColgan claimed a Scottish Native Record in the 3000m steeplechase final as she finished sixth at Hampden.

Kenyans Purity Kirui and Milcah Chemos scrapped for the gold and silver medals in front of an excited crowd.

McColgan had hoped for better than the 9.44.65 time which shaved four hundredths off the Native Record, the best mark by a Scot in Scotland in an event, she set at Hampden a couple of weeks ago in the Diamond League.

On another hectic night for Scots, there was a ninth place in the high jump final for Ray Bobrownicki while Guy Learmonth lifted the whole stadium with a superb 800m semi-final performance to claim a third automatic slot and reach Thursday’s final.

Discus thrower Kirsty Yates is to be commended for a really fine PB of 16.42 (her previous had been 16.09) in the shot which gave her eighth place in the final with Alison Rodger finishing 10th with 14.76.

Eilish said: ‘That’s a Season’s Best and a Native Record so I guess that shows I’m headed in the right direction at the minute because it was not a paced race like the Diamond League at Hampden.

‘It is not where I want to be, though. I will keep the season going because it still feels as if it is only just starting.

‘I will try and run a couple more steeplechases and try and get it down to 9.30 something to set me up for 2015. I will do a couple on the flat as well and try and improve.

‘The welcome for Lennie Waite and me was something we will always remember. It all becomes a bit of a blur once the race starts but I want to thank everyone for their support.’

Learmonth said: ‘That was the best run of my life! I was running for third slot after consultation with my coaches George Gandy and Henry Gray.

‘They told me to forget about time and concentrate on position. I’m loving the support of the crowd and trying to rise to it in terms of my performance. I can’t wait for the final – I will do my very best for Scotland.’

Yates said: ‘I was delighted with that big PB of 16.42 with my opening throw. I found it hard after that, I have to admit. You want to PB at championships so to throw that far at the Commonwealth Games.’

Alison said: ‘I competed with Valerie Adams when she came to Scotland at 14 and threw in an U17 comp.  I will speak to her in the Village about it and show her a couple of pictures.

‘I was in there with some good athletes. My knee crumpled a bit after the first throw but it was great fun.’

Bobrownicki’s best clearance was 2.21m with only four men bettering that height but he had to settle for ninth equal place. Ray said: ‘The crowd were amazing – so attentive and appreciative of every athlete. I am proud to live in Glasgow and represent Scotland.

‘It would have been nicer to go over a bit higher but I’d have been reasonably content with 2.21 in the final and a top 10 finish in the Games if you’d asked me a couple of months ago.’