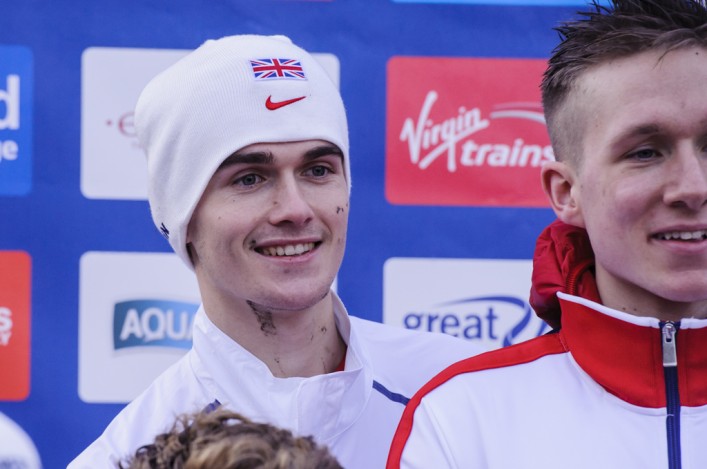 All the Great Edinburgh XC results (scroll down page on left)

Mo Farah isn’t used to second place but he had to settle for that when Garrett Heath made it a hat-trick of Great Edinburgh XC triumphs – with the American very much at home on the Holyrood Park mud.

But there was nothing second rate about the performances of Scotland’s five GB representatives on Saturday at Holyrood Park.

Callum Hawkins delivered a thrilling display to force the pace for long spells before finishing fourth and only 12 seconds off Men’s International 8K winner Heath.

Callum’s Kilbarchan AAC training partner, Euan Gilllham, enjoyed his second top ten finish in a row in the Junior Men’s race as he came through lap-by-lap for ninth place. Euan was fourth Brit.

And Beth Potter (13th) and Josephine Moultrie (22nd) were very competitive in the Women’s International 6k. Potter was the fifth counter for GB while Moultrie, back in a GB vest for the first time in more than six years, was ninth in what was selected as a 12-strong GB team.

Hawkins has his sights firmly fixed on the London Marathon but proved a point about his cross country prowess in his first outing since the National XC last February – when Butchart took his first Scottish title.

‘I didn’t have all that many cross country sessions in preparation and I didn’t have a great run here last year so this was even better than I could have hoped for,’ said Callum.

‘I pushed it on as much as I could at times and it was great to be involved in a race like that with someone like Mo.

‘In fact, on the last lap when I was leading it out for a while I think I was getting more shouts than there were for Mo – which was incredible! The crowd around the course was brilliant today and I was grateful for the support.

‘London is very much the priority now but I wouldn’t rule out the National XC again at the end of February. It will be a tough decision, because that is when I should be doing a big block of marathon training, but again it is the National Champs and it would be nice to try and win it this year.

‘Andrew beat me last year and he was better than me on the day in 2015. I’m sure he would actually quite like me to be there again because rivalry and competition is good for us.’

*Watch the full length coverage from 1pm to 2.30pm on this feed to European Athletics 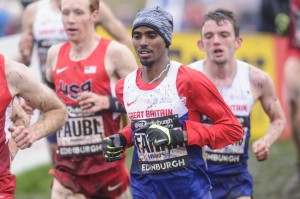 Farah lost out to Heath by two seconds and was gracious in the aftermath – with the GB star also spending a lot of time signing autographs, vests and posing for photographs for young (and not so young) alike.

‘Garrett (Heath) was the better man on the course today and he showed that. He proved that – he was bouncing off the ground quicker. There were a couple of times I nearly went and you could see with the corners that when you’re comfortable you can run off it, but I just wasn’t that comfortable.

‘I don’t want to lose a race, I hate losing but it’s better to lose now than in August. Garrett’s shown year after year winning on this course and he was the better athlete over the course.’ 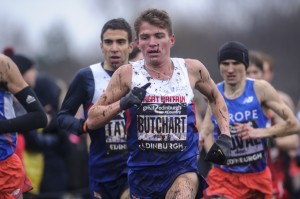 Andrew Butchart – put his Liverpool run firmly behind him

Butchart selected for Scotland for Antrim

Butchart was rightfully satisfied with his run, his seventh place remarkably the fifth counter for GB. The Central AC athlete missed out on GB selection for the Euro Cross after his trials run in Liverpool was affected by a virus the previous week and he felt he had a point to prove.

‘I wanted to show I was better than what happened in Liverpool – when I should not have run – and I’ve done that,’ he said.

‘Mo is great to have in your team and he is so infectious with that smile around the hotel and everything. Callum took the pace on a lot to today and that helped a few of us who were chasing.

‘I’m expecting to be at Callander Park on February 27 defend my title at the National XC. That is the plan at the moment but I need to talk with my coach about what we do indoors.

‘I did the British indoors last year, just before Falkirk, but that’s not happening this year as the dates clash.’’ 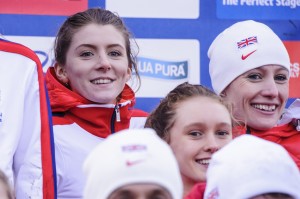 Beth Potter – on the overall event podium with GB