Child is KUKRI Athlete of the Year 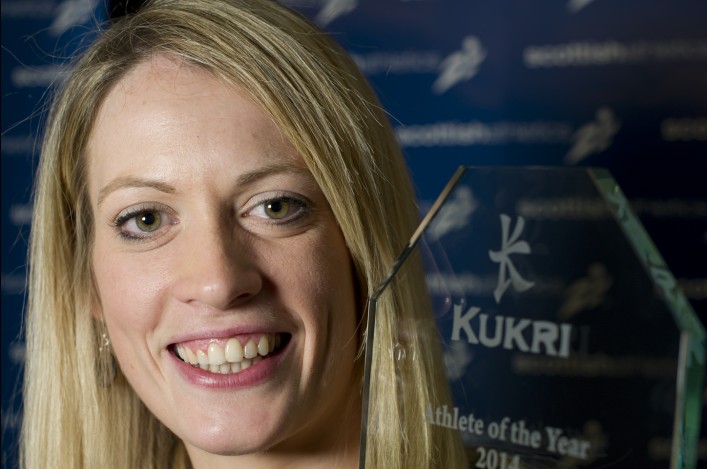 Eilidh Child has been crowned KUKRI Scottish Athlete of the Year following a superb 2014.

It is the fourth time in six years the 400m hurdler has won our top award with the presentation made at the Annual Dinner at Hampden late on Saturday night.

Child edged out Lynsey Sharp with the 800m runner, who won the title in 2011 and 2012, handed the Commonwealth Athlete of the Year for the best Scottish performance at Glasgow 2014 following her dramatic silver medal success at Hampden.

Eilidh picked up four major medals during the year and finished second in the overall Diamond League programme – the highest level of competition in the sport.

But it was her European gold in Zurich over 400m hurdles which just gave her the edge over a short-list that featured Sharp, O’Hare, Libby Clegg and Mark Dry.

Libby also collected the Dallas Trust Trophy and there was a special moment when her guide runner, Mikail Huggins, was presented with the Tom Stillie Sword – for contribution to the sport.

Video interview with Eilidh looking back on her 2014 season

‘I’m thrilled to win this award and especially so when you look at the qaulity of performances by the five athletes on the short-list,’ said Eilidh.

‘It has been a special year for the sport in Scotland and for me personally.

‘I keep being asked for my highlights and really there are two in a photo-finish – the lap of honour at Hampden after silver in the Commonwealth and standing on top of the podium in Zurich for my European gold.

‘The whole excitement and atmosphere around Glasgow 2014 was something everyone embraced and there were some strange moments for me like the promotional photo on the roof of Hampden months before the Games – people still don’t believe that I was actually there and think I was super-imposed on the picture! I wasn’t – I went up there in a Scotland vest!

‘Then, shortly before the Games, I arrived at Glasgow Airport and saw a picture of myself on a massive billboard. I admit we drove up onto the roundabout and took a snap with that picture because I thought ‘this is only going to happen once’. It was pretty cool.’

Director of Coaching Rodger Harkins, who was involved on the scottishathletics panel who picked the award winners and short-lists, said: ‘Eilidh is a worthy winner again in what has been a really good year for a number of our top athletes.

‘I think the quality of the athletes on the short-list for the main award exemplifies that. We’ve Commonwealth and European medallists on there as a basic benchmark and the bar was set high in 2014 – across all the age-group and other awards, in fact.

‘We were impressed with Eilidh’s Commonwealth Games performance and taking silver at Hampden after a long ‘countdown’ period during which she attracted so much attention as a home favourite and medal hope.

‘But I think I can say that it was probably Zurich which just edged her in terms of the decision-making. To go into the European Championships and win gold was terrific, peaking so soon after the Commonwealth Games.

‘She was favourite in her event and that just added another layer of pressure for her in Zurich – but she took all of that in her stride. It really was a fine performance in Switzerland taking in the various factors.

‘And the excellence of her season overall is further shown by second place in the Diamond League competition.

‘The Commonwealth Games Performance Award went to Lynsey Sharp and I don’t think too many people will be surprised by that. Lynsey struggled dramatically in the semi-final on the Thursday night when feeling unwell and the story of what happened thereafter is now widely-known.

‘I was involved in the team camp at that time with Stephen Maguire and I can safely say that Lynsey’s biggest achievement at Glasgow 2014 was: getting on the start-line for the 800m final that night. There were long hours between the Thursday and the Friday evening when we didn’t think that would happen.

‘We’d Para athletes on a number of short-lists and I think it is clear that we’ve a group of Scots there who are performing at as very high level. That was obvious at Hampden and Swansea and we look forward to the Paralympics in Rio having significant Scottish interest.

‘Let me offer my congratulations to all the athlete and coaches involved in our Award lists. It is testament to their on-going dedication to their sport.’

Haven Para Athlete of the Year: 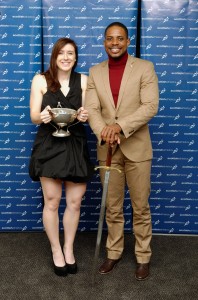