Jake Wightman came within touching distance of the 37-year-old Scottish mile record at the Anniversary Games in London this afternoon.

Claiming 3rd place, Jake produced a PB of 3:52.02 in the Emsley Carr Mile, making him second-fastest Scot on the all-time list over that distance, behind the long-standing record of 3:50.64, set by Graham Williamson in 1982 (Williamson also ran the 2nd and 3rd fastest Scottish miles, giving Jake now the claim to 4th fastest mile by a Scot overall).

“It didn’t feel that fast the first couple of laps,” he said, “Then it started to stretch out and you really knew it was on, when the clock showed what it did after 1200.

“Every time I race this meet I’ve PB’d so I’m glad to keep that going. It’s such a fast track that it’s kind of a missed opportunity if you don’t get near your PB or PB coming here, so I’m pleased with that.”

Lynsey Sharp got the win and a season’s best in the 800m, crossing the line in 1:58.61, showing a steady progression after her 1:58.76 finish in Monaco earlier this month.

She said: “It was a good race. It’s so nice to be in this stadium in London. Everyone has been saying how fast the track is so it was good to make the most of it today with a season’s best.

“I’m happy with my time. Last week was good but it was so nice to back myself up here as well. Hopefully I will be racing Birmingham Diamond League but I haven’t been confirmed yet. After that, it will be trials so it’s just a few weeks of training now on the road to Doha.” 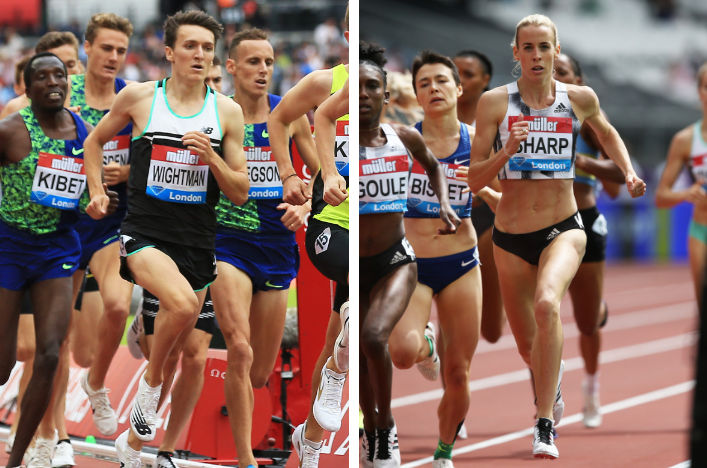 Photos: With thanks to British Athletics and Getty Images