Ultimately, it was to be seven in total with Percy, like Kirsty Law, repeating his discus success of 2019 in Birmingham with a fifth round throw of 59.74m.

There were silver medals, however, for middle distance duo Jake Wightman and Neil Gourley, as well as hammer thrower Chris Bennett.

Fierce competitors that they are, none of that trio announced himself satisfied with second best inside the Manchester Regional Arena, although Neil felt better about it than Jake and Chris with the Giffnock North AC feeling his podium place actually belied recent training.

Even repeat champion Percy felt he should have thrown further.

‘I am very happy to have defended the title but performance-wise I’d have liked a bit more,’ said Nick.

‘It was a great competition with George Armstrong taking the lead in round five, then I was able to come back with my best throw.

‘The best thing about competition is walking in knowing you must push yourself, that is what the thrill of it is and why we do it as you never know who is going to win. You can’t just show up and win. It is about performing on the day.

‘Conditions were really good, it could be a little warmer but it is September. Series wise it wasn’t the cleanest of throws but at the end of the day it is the Champs and I got the win.’

Neil Gourley had hoped to defend his title from the previous year but in a race which started so slow, he was pipped in the latter stages by George Mills.

The time were of no consequence with the Giffnock North AC athlete happy with his decision-making that saw him lead when the pace began to pick-up.

‘That went how I was expecting it to go with a battle over the last lap,’ said Neil.

‘I am not where I need to be fitness wise but that kind of race suits me. I did not do much wrong but I was beaten by someone who is better today.

‘I was not really planning on peaking right now as I backed off the season in mid-July. When I heard about these Championships, I had to build something back up again because I had to get some racing in me just because it is a race and it is great to be here.

‘I usually like to come from behind, but the way the raced developed I had to grasp that inside line and I could not risk people coming around outside and boxing me in.’

Inverness Harriers athlete Stephen Mackay took 10th place after  making it into the final for the second year and a row.

In the Women’s 1500m final, Erin Wallace came up with a good run to finish just adrift of the medals in fourth place. Erin clocked 4:15.48 and judged her finish well in the battle for fourth. Eloise Walker was ninth in 4:19.24. 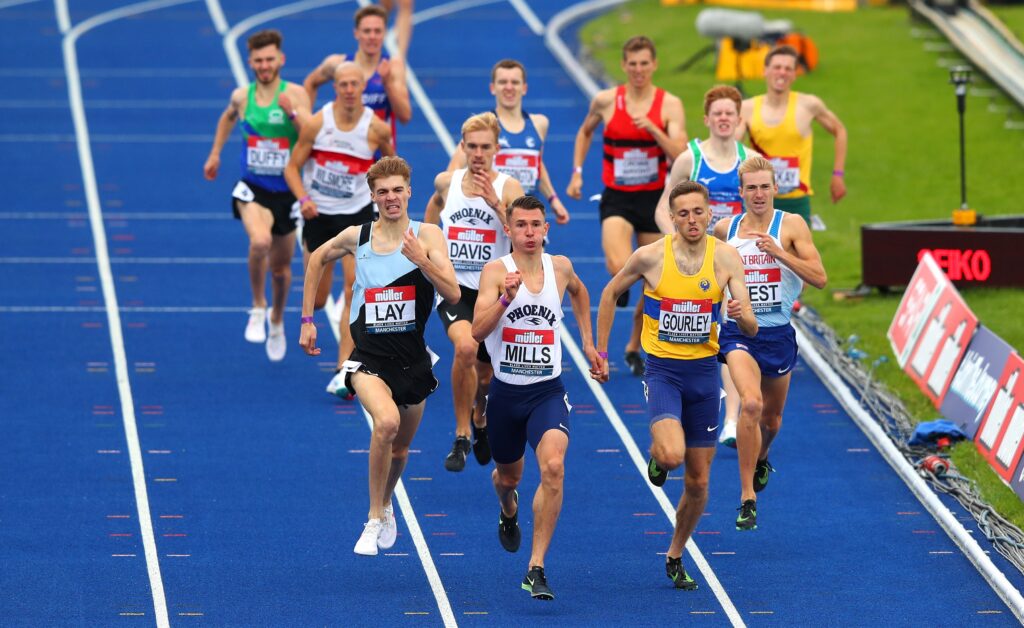 Fight to the finish . . . the closing stages of the Men’s 1500m at Manchester (photo via British Athletics/Getty Images)

‘I am frustrated with that,’ said Jake..

‘I came here with one intention which was to win it but I feel like I did everything. When you are running against a guy like Daniel with the form he is in, I knew he was going to be hard to beat and he proved that today.

‘So I am still on the search for an outdoor title. The plan was always to target the 800m, I am in okay 800m shape and I have got a couple of races to prove that. I always like to compete against the best in the country at 800m.

‘I feel like doubling up between the 800m and 1500m is how the old school middle distance used to run and I put myself in that category which is why I don’t like being called the 1500m guy stepping down to a 800m runner. I am a 800m runner as well.

‘I have a quick turn round with Ostrava on Tuesday for the 800m and you can’t replicate the back-to-back racing anywhere else in the year. It is what we need to do to get through rounds at the big championships so why not practice it on home soil.’

Jake’s Edinburgh AC team-mate, Joe Ewing, demonstrated his potential with fifth in that final and it was a similar story in the Women’s 800m showpiece with Hannah Cameron, another EAC talent, fighting hard for her sixth place. 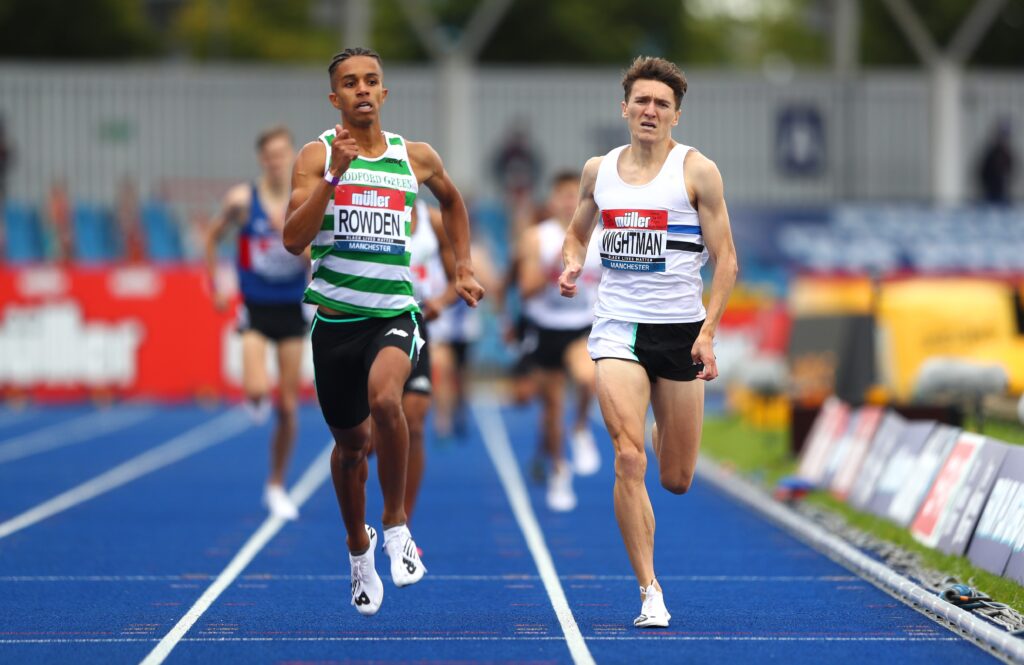 Chris Bennett picked up a silver medal in the men’s hammer competition with his final round 68.84 his best throw. Craig Murch took the gold at 73.24. Ciaran Wright was fifth placed at 62.61.

‘I am in good shape physically but lacking the completion sharpness,’ said Chris.

‘I compete because I love it but it has been hard to get training in because I had to get a full-time job meaning I could train once a week.

‘It has been hard to replicate the competition environment seeing as I am throwing next to an air field so credit to people who have put this on. I have felt very safe threw the competition.’

Also in the throws, Craig Charlton was seventh in the shot putt with a best of 14.87m. 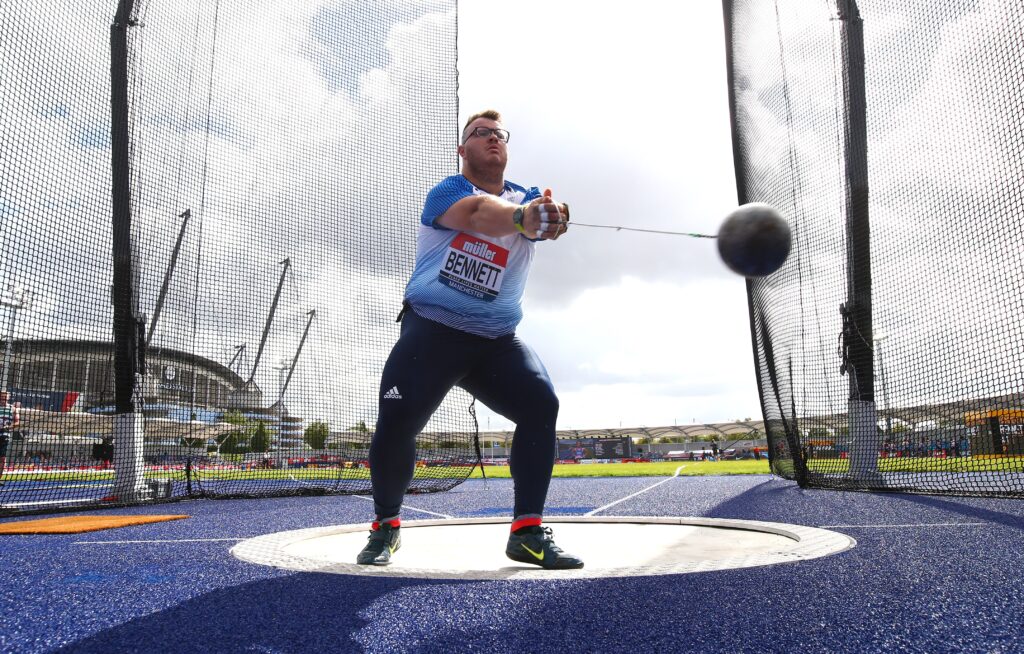 Jack Lawrie was in the hunt for a medal for much of the race in the 400m Hurdles but couldn’t hang on and finished fifth with a run of 51.55 seconds.

Edinburgh AC’s Emily Craig featured in the Women’s 400m Hurdles final and came home in sixth place in a time of 61.80.

Three Scots featured in the men’s 5000m final which was dominated by GB international Marc Scott. 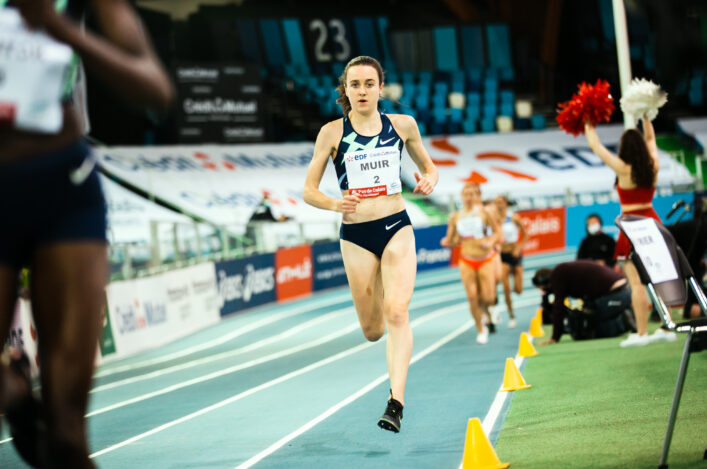