Henry Clarkson won a Scotland vest at the Manchester International last year and he’s the current British Unis indoor champion in the triple jump after winning BUCS in Sheffield.

Henry also won a silver medal at the 4J Studios Scottish Senior Indoor Champs at the Emirates Arena in Glasgow in January with a leap of 15.64m that was close to his PB.

So where did it all start for the 20-year-old who was coached by Linda Nicholson before moving south to Loughborough Uni?

Henry has been speaking to freelance journalist Gary Heatly about his development in the sport.

‘I have enjoyed representing the university at two Loughborough International Meets over the last couple of years – coming third in the triple jump last year,’ said Henry.

‘I won my first senior Scotland vest at the Manchester International last year which was a proud moment.

‘All being well I should graduate from my degree in September and then we will see what happens, but I would like to stay down in Loughborough to try and continue the progress I am making.’ 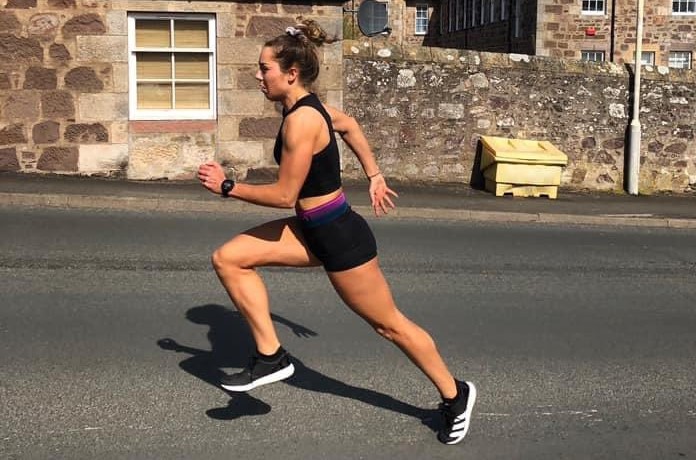 Kelsey Stewart training on the streets of Stonehaven (photo via Twitter)

Scotland international 400m runner Kelsey Stewart should have been opening her track season in Florida right now but is instead pounding the streets around her home in Stonehaven.

The 22-year-old graduated from Aberdeen University last summer with a first class honours degree in exercise and health science and is now studying at Cardiff University for a masters in strength and conditioning.

She was preparing to jet off to the US, along with her Welsh training group and coach Matt Elias, just a week before the lockdown.

‘It was a pity the trip was cancelled but it was inevitable and understandable. Now my coach says we won’t be able to make any gains at this point, but we can concentrate on maintaining our fitness,’ Kelsey told the Press and Journal.

‘I am trying to work on different aspects. James Cruickshank, a physio based at Aberdeen Sports Village, is putting a daily session of mobility and strength and conditioning sessions online.

“It gets me up and going and I’m really enjoying it.  I’m also doing a lot of hill runs. I hate them, but they do me good. I can also do some speedwork on the roads around my house, so it’s not too bad.