Celebrating and acknowledging the huge contribution of our dedicated Officials is a fundamental principle at scottishathletics.

We try to do so after many championship events across social media and should never tire of saying ‘Thanks’.

So it’s great that the FPSG Awards Dinner features not one but two accolades for our Officials as both the Raymond Hutcheson Trophy for Services to Officiating and the Official of the Year award were presented on Saturday night.

The Official of the Year was won by Val Murdoch of Law and District while Dave Finlayson was awarded the Raymond Hutcheson Trophy.

Here are the three nominations and Val’s citation:

Official of the Year

Presented to a scottishathletiics Official who has shown excellent commitment and dedication in contributing to the success of their own discipline as well as the wider sport during the past year, demonstrating personal growth and support for their officiating colleagues.

‘In addition to being a graded Starter’s Assistant at local and league meetings, Val Murdoch has been at the heart of the admin team at every single scottishathletics Track and Field Championship in 2019 (both indoors and outdoors), ensuring start lists and field cards are available in advance of each event on the day and distributed to officials who need them to carry out their duties.

‘Val has also introduced new officials to ‘the art of seeding’ (her words!) through providing training to those working alongside her.

‘She has shown significant dedication to her role through her attendance at 16 days of Championships this year, and these meetings would not have run nearly as smoothly without her efficiency, organisation and seeding know-how.’ 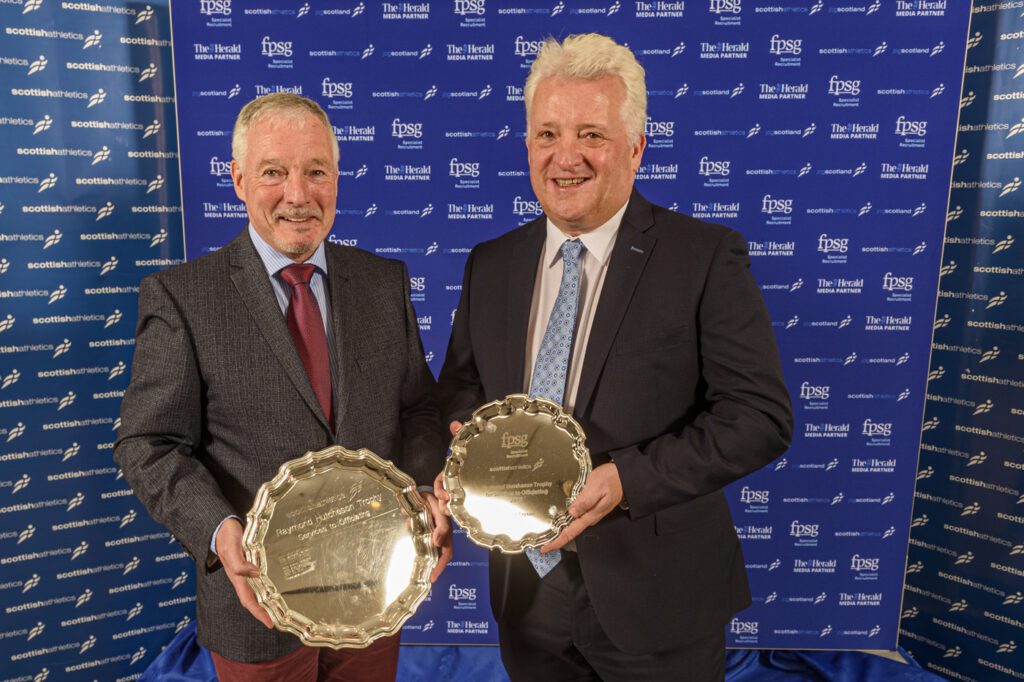 Lasswade AC’s Dave Finlayson won the Raymond Hutcheson Trophy for Services to Officiating, with Stuart Tait collecting the trophy on Dave’s behalf at the Dinner.

Dave has a key role in our Photo-Finish team in track and field events and was described as the ‘go-to’ man on all technology issues.

Many congratulations to both Val and Dave on their awards – and a huge thank you from us to all our Officials for your efforts in 2019.

There was also success for scottishathletics Officials at the sportscotland Coaching Officiating and Volunteering Awards (COV) when Mark Stringer was named Technical Official of the Year.

Congratulations to Mark Stringer, our 2019 Technical Official of the Year!

‘Mark is among the highest-ranking athletics officials in Scotland and has carried out officiating duties at national, regional and club level.

‘He officiates across Scotland nearly every week and has shown great commitment to his role in his willingness to help prepare events – often attending nights or even weeks before to help set up venues.’

Tags: Officials, Officials of the Year