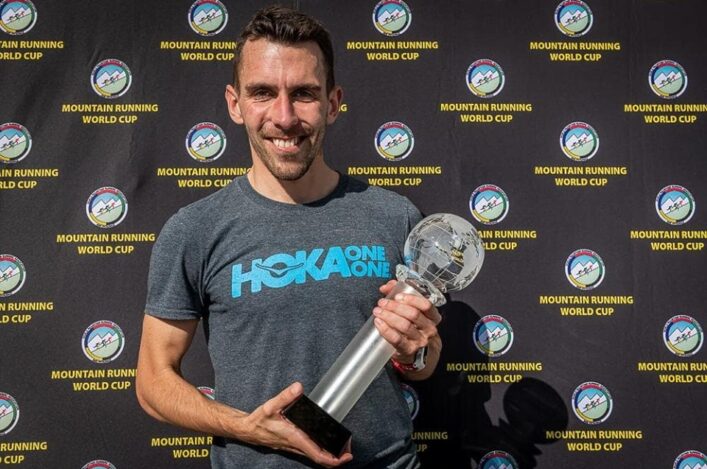 Andy Douglas savoured World Cup success in the mountains of Slovenia at the weekend.

A fourth place finish at the Smarna Gora race which concluded the World Mountain Running Association seven-event series for 2019 was enough to confirm his position at the top of the overall league table.

Irish athlete Sarah McCormack – once of Moorfoot Runners in the Scottish Borders – took the women’s World Cup with both rewarded with superb crystal trophies by the WMRA.

Scotland and GB international Douglas, who still has the World Champs in Argentina to come in November, raced all seven events and came up with wins in France, America and Wales en route to his ooverall victory.

Here’s what the WMRA said about the World Cup winners:

‘It’s a great achievement for Douglas and McCormick, who have shown great consistency and mental strength throughout all the season.

‘The seeds of which were planted many months ago, when the long and exciting adventure of the 2019 World Cup began in the French Alps of Annecy.

‘Following this they raced in the USA, Austria, Wales, Switzerland, Italy and here in Slovenia. It has led the World Cup athletes to compete on a huge variety of terrain and distances and reveals to us now just who are the best all round Mountain Runners.’

Many congratulations to Andy, his family and coach Sophie Dunnett on a fine achievement over the season.

Lasswade AC Lauren Dickson was racing in the U20 race at Smarno Gova in Slovenia – and the GB international came up with the win! Well done.

Thanks so much for the amazing support @InverclydeAC and @scotathletics , that's great to hear. Not quite the the high I wanted to round off the series on, but a solid enough result and focus now switches to the World Champs next month in ?? https://t.co/Ol6YwPLumK 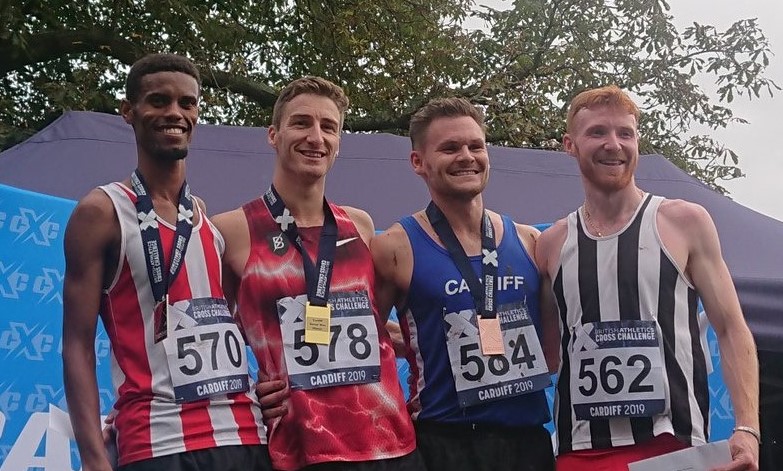 The Senior Men’s top four at Cardiff (photo via Twitter)

Jonny Glen added further to a good weekend for Inverclyde AC with a strong run at the British Cross Challenge Series event in Cardiff.

The Scottish Trail champion finished in fourth place in the Senior Men’s race in Wales with Jonny back in Scotland this year following a stint in the United States.

With the top four receiving prize-money in the British Cross Challenge events, he made the Cardiff podium.

Team East Lothian’s Cera Gemmell took third in the Women’s U20 race and Giffnock North athlete, Valencia Wright, was fourth in the U15 Girls race.

Lothian Running Club’s Sarah crossed the finish line with a new course record time of 25.44 seconds, this was well inside her time of 12 months ago which was 27.27,.

It was also a new PB, just over a minute quicker than her previous best for the distance of 26.47 set back in April in the Race Roster Spring Run Off 8k in Toronto.