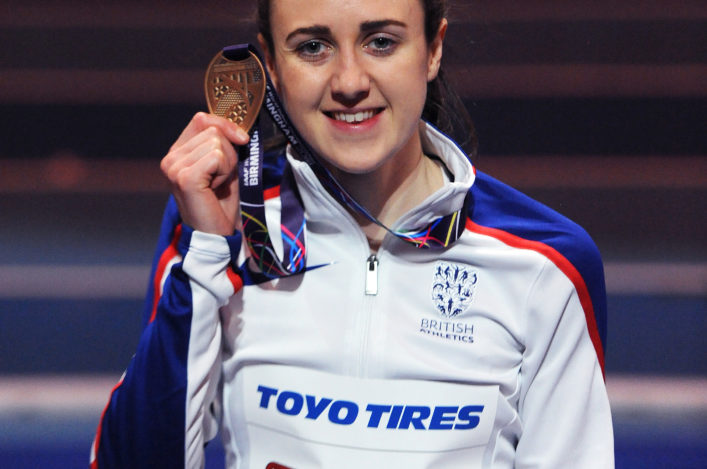 Laura Muir claimed her first global event medal with bronze in the 3000m final at the World Indoors in Birmingham.

The Scot battled hard for third behind winner Genzebe Dibaba and silver medallist Sifan Hassan in a burn-up of a race after a slow first lap given the quality.

It was a special moment for Muir, who won the 1500m and 3000m double at the European Indoors, as she progressed from fourth place in London in the 1500m final last year to make the podium at 24.

Remarkably, Laura is the first Scot to win an individual medal at a World Indoors since three were claimed back in 1993 by Tom McKean, Yvonne Murray and David Strang. There have been a couple of relay medals in the interim, for Eilidh Doyle and Jamie Bowie.

But it feels like another huge stride forward for Laura and her coach, Andy Young, and all at scottishathletics warmly congratulate the pair and the Muir family and those involved in her development over a number of years. 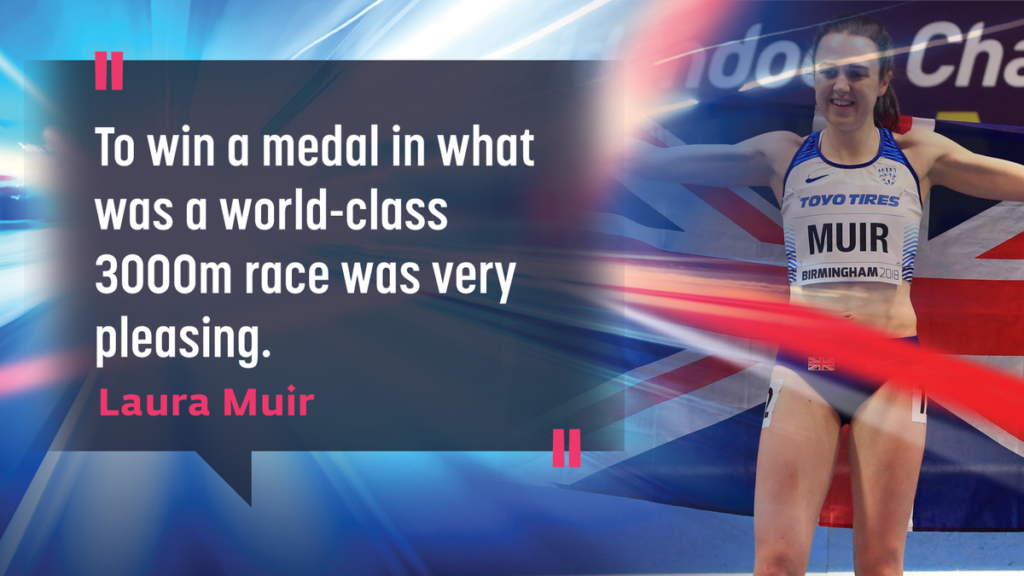 The first kilometre had been raced in 3.14 but that changed into a 2.53 for the second as the main contenders picked up the pace.

German Konstanz Klosterhalfen was soon swallowed up and Muir got ahead of her and Hellen Obiri to challenge Dibaba and Hassan.

In fact, Laura was very close to silver as the line neared and Hassan did move out slightly although the likes of BBC commentator, Steve Cram, didn’t feel she was blocked.

As it happened, the World champion over 5000m in London last summer – Kenyan Obiri – was the one to miss out on the medals.

‘We had to put yesterday behind us; six hours in the car, windscreen wipers were frozen but we got here and I’ve won a medal so I couldn’t be happier,’ said Muir,

‘I ran the race as hard I could; I was so tired at the end. It means so much to me to get the win; it bodes well for the rest of the year, especially the Europeans.

‘I’ve been 4th, 6th and 7th at major championships so the bronze is very special. To finally get that world medal means so much; I’m delighted.

‘I just wanted to stay out of trouble at the start; Klosterhalfen took over the pace so everything went to plan. I knew I could be strong at the end so I’m very pleased.’

In contrast, Eilish was really disappointed not to have raced better on the night after feeling ‘sluggish’.

‘Training has been going really well up to that point but I have felt a little bit flat. I am so disappointed with that today, with it being a home championships I wanted to be competitive And today I wasn’t.’