Ian Beattie has insisted scottishathletics will continue to work to develop strong clubs – as the sport in Scotland savours a remarkable Olympic selection high watermark.

The 80-strong GB and NI team for Rio features no fewer than 15 Scots and that represents almost 19 percent of the total figure.

It is also the best representation for 108 years on a British team for an Olympic Games in terms of Scots picked for track, field and marathon..

Here, in a blog post, the scottishathletics chairman offers his congratulations to those involved – with a number of the 15 athletes having been developed at clubs in Scotland. Looking ahead, Ian hopes for a continued united approach across a diverse sport.

At the foot of the blog, we’ve video interviews with Eilidh Doyle and Andrew Butchart from the British Champs as they talk about a ‘domino effect’ among our top athletes.

‘I am delighted by the success of Scottish athletes over the last few years and with this tremendous representation at the Olympics.

‘The credit for this, first and foremost, must go to the athletes themselves, and to their coaches. Success like this does not happen overnight, and we recognise how much hard work has been put in over many years by clubs and coaches at all stages of each athlete’s development.

‘I’d like to personally wish them all the best for their final preparations for Rio and I know the sport as a whole in Scotland is right behind them in sending support and good wishes.

‘As a governing body, we have tried to play our part in establishing a positive environment for our athletes to develop.

‘We are totally committed to developing strong clubs throughout Scotland, and it has been really pleasing to see the way clubs have grown and developed over the last six years – allowing them to capitalise on the ‘bounce’ from the London Olympics and Glasgow Commonwealth Games. 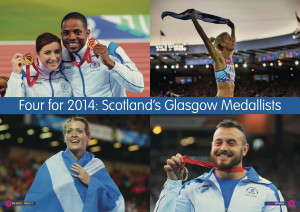 ‘Those Championships have also provided great inspiration to our top athletes, who have witnessed the level of performance (and hard work) needed to win medals and have used this as motivation to take their own performances to a higher level.

‘We have tried to focus on forming strong partnerships across all areas of the sport: partnerships with athletes, with coaches, with officials, with clubs, with UK Athletics, and with funders such as sportscotland.

‘It has been very important for us to try and get everyone in the sport ‘pointing in the same direction’.

‘We are all wanting to achieve the same goals, and I believe that we have a much better chance of succeeding if we all work together. Good communication has been a key to this, ensuring that everyone who is part of athletics in Scotland feels part of the same family.

‘We’ve seen big rises in entries for many National events over the past two or three years – in Cross Country and Age Groups track and field (outdoor and indoor) in particular.

‘This suggests the athletics community is picking up on our drive to encourage clubs to commit to competition and thus both grow participation and raise standards and we’re really pleased with that response.’