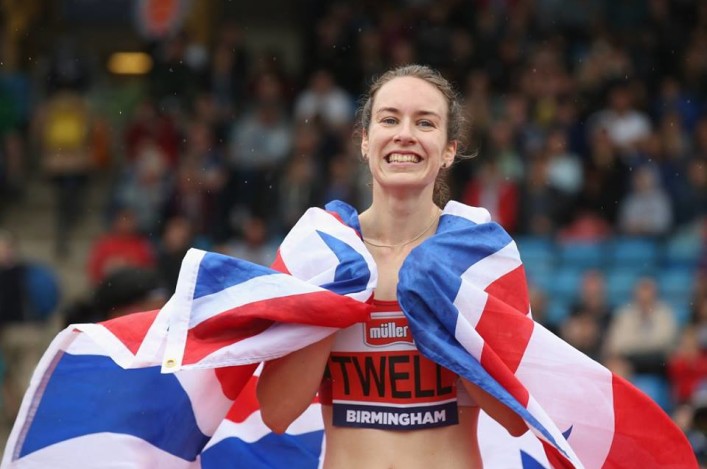 Scotland’s top athletes bossed Birmingham as no fewer than seven athletes claimed automatic selection for the Rio Olympics at the British Champs.

The ‘Super Sunday’ action thus took the overall tally of Scots headed for Brazil this summer within Team GB and NI to 12 in track, field and marathon.

That represents a remarkable high water mark for the sport in Scotland, and particularly for the athletes and coaches involved, with the figure topping those for the past ten Olympic Games since a dozen were selected for Munich back in 1972.

In medal terms, too, it was a highly profitable weekend at the Alexander Stadium with the overall ‘haul’ for the weekend running to 17. That was six golds, six silver and five bronze to add to a gold for Beth Potter in the 10,000m in London in May for 18 in total.

It is worth noting that, ten years ago, Scottish athletes picked up only four medals at the British Champs with none of those gold.

‘It has been a terrific weekend for Scottish athletes and their coaches in Birmingham – and we’re all excited by the performances,’ said Rodger Harkins, Director of Coaching.

‘Naturally we want to firmly congratulate those athletes who have put themselves in the frame for automatic selection for the Olympics. That is the pinnacle of the sport and they’ve put in so much hard work to achieve standards and high finishes at the British Champs. We say ‘well done’ to them and their coaches.

‘We also have people in contention for the European Championships in Holland and others who landed medals in Birmingham, reached finals or recorded PB performances in heats. We commend those who performed on the big stage.

‘I also want to thank our Olympic bound athletes because they are providing inspiration and motivation for other Scottish athletes – and that is a great thing for the sport.

‘Overall,  I am thrilled.  Six (Olympic selection) was a target we had spoken about within the sport so to exceed that so emphatically is a massive encouragement.’ 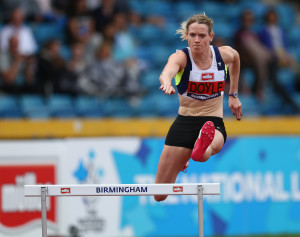 Eilidh Doyle was first out of the blocks in terms of the Sunday golds – as she  retained her 400m Hurdles tile with 54.93 to secure qualification for her second Olympics after racing at London 2012.

‘I never take anything for granted because you’ve still got to go out and execute the race,’ said Eilidh.

‘I had to remain focused but I’m happy to put on a show this afternoon. It’s great to confirm qualification to the Olympic Games. I’m confident going into that competition as the hurdles field on the international stage is wide open this year.

‘I’ve got to keep working hard because they don’t just hand out medals to anyone so I will be fighting for one. Until you have cemented that spot on the team, you can’t properly focus on it but now we can go away knowing I’ve secured my spot. ‘ 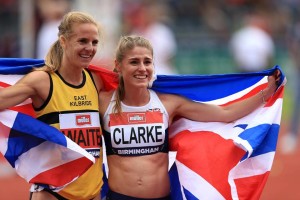 Lennie Waite then required top two in the 3000m steeplechase and came up with second and the silver medal to clinch her passport to Brazil.

Lennie ran 9.54.06 to finish behind winner Rosie Clarke but it was all about top two for the American-based Scot, who wore the colours of East Kilbride AC at the Alexander Stadium with her father having worked in the two many years ago.

‘It makes it so much easier because today I can start training for Rio and that’s a great position to be in, there’s plenty of time to get my training back on track. I had to travel here from Texas and adjust which was difficult, but now I have a lot of time to focus on Rio. 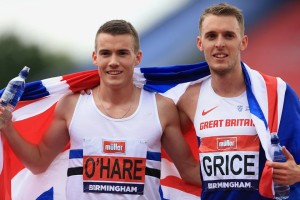 Chris O’Hare took silver in a men’s 1500m where the Scottish contingent of six athletes made up fully 50 percent of the 12-strong field.

That was enough to book his place, with Edinburgh AC athletes finishing second, third and fourth as Jake Wightman landed bronze and Josh Kerr delivered another hugely-encouraging performance at a high level.

‘I’m glad I was able to get it done, it would have been nice to win but my coach said to me before the race, just make sure you are top two and then you can do whatever you can to win the race. So I didn’t want to make any daft moves that might compromise getting top two.

‘When I came round the bend I knew there would be a lot of commotion, I didn’t want to get tripped up. I ended up at the front and didn’t push it, I should have pushed it. I knew I could close well and finish in that top two, it was all about staying calm.’ 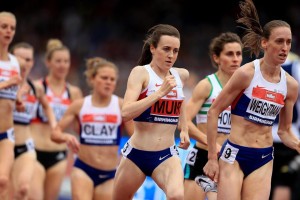 Laura Muir retained her British title as she surged clear on the last lap to win in 4:10.14 – and make sure of a place at her first Olympics.

It feels great – I just wanted to tick that box and seal my place on the team for Rio. I’ve retained my title at the same time so I am delighted. It was quite windy so I knew if I was going to win that I was going to have to make a break for it. It slowly wound up and  managed to break up the field.

‘Winning races always boosts your confidence but to win the British title means a lot to me. I’m in the best shape I can be – I’m running PBs in sessions and close to my track PBs during track sessions so I’m running well.

There were runs in that final, too, for Josephine Moultrie and Sarah Inglis at 11th and 9th place respectively. 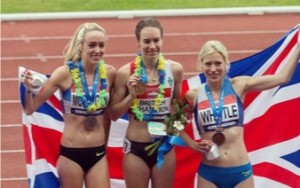 The Women’s 5000m was replete with potential for Scottish athletes. And it did not disappoint.

Steph Twell took gold in 15:53.35 with Eilish McColgan landing silver – and both thus taking automatic selection. Laura Whittle was third and must now hope for a discretionary pick.

‘It’s fantastic, what a relief,’ said Steph. ‘I’ve been on a long journey to get to Rio but it has been worth it. I’ve been through and lot but I’m enjoying racing and to win the British title today is great. The race was very tense as there were three of us going for those top two spots.

‘There is no greater motivator than aiming to qualify for an Olympic Games. I’ve worked so hard on my range, from 800m up to 5000m to be ready in case the race is very bunched and it shows I have the strength and power when I need it in the race.’

McColgan said: ‘It hasn’t really sunk in yet, my main aim this year was to get myself back running again after having the whole of 2015 out.

‘To actually run the qualifying time initially was amazing, but to now have secured my place (in Rio) is amazing. It’s not very often you come second in a race and you’re pretty happy with it. So honestly I’m over the moon with today.’ 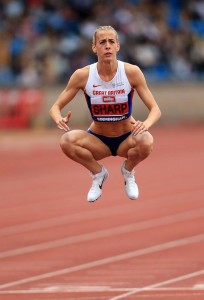 And Lynsey Sharp made it 12 – call them #dedicateddozen – with second place in the 800m to Shelayne Oskan-Clarke.

‘It was just about getting top two today, obviously it was always going to be a competitive race with so many girls chasing qualifying.

‘I’m disappointed to have not held on to it in the end, I tightened up in the last 10 metres when I knew there were people chasing me down.’

Hammer champion Chris Bennett said: ‘I am happy to win but it would have been nicer to get a Rio standard. However, hopefully we’ve got the European Championships to get that. I knew it was going to be bad conditions today so the main thing was to win. If the conditions were better today then I would have got the standard.

‘I feel really confident training is going really well. I PB’d last week but it’s only 55cm to find which is miniscule. I took a couple of scalps today so I’m just hoping to get the European selection.’

Mark Dry pushed Chris in that event to take second place and silver with 74.92m.

Other medal performances included: Silver (joint) – Jax Thoirs in the pole vault with 5.25m; Bronze – Kirsty Law in discus with 52.19m; Allan Hamilton bronze in the long jump with 7.56m. 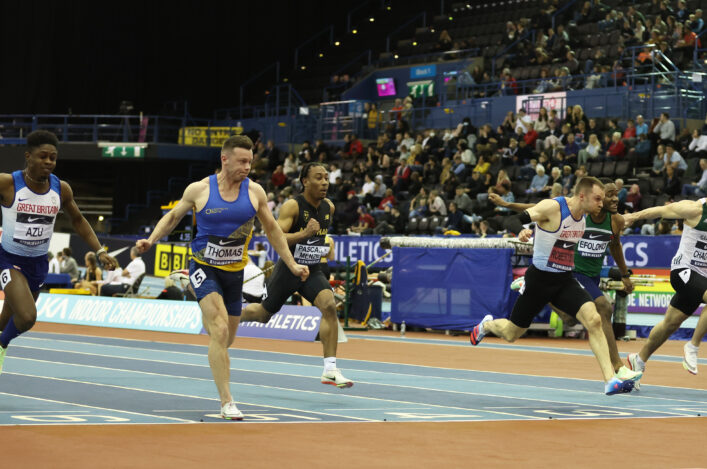