Thirteen Scots have been named on the British Athletics World Class Programme (Olympic pathway) for the coming year.

It’s great news for all those selected for funding, and particularly for Neil Gourley, who moves into the programme for the first time, and Steph Twell who returns.

There’s good news too for Jake Wightman, who moves up into the higher tier of the programme. The tally is also a step up for Scottish athletes as a group, with 11 athletes selected in the Olympic sections last year.

Paralympic selections will be made in the new year, due to the late-season scheduling of the World Para Athletics Champs in Dubai.

The World Class Programme is UK Sport’s National Lottery-funded initiative to support elite athletes to success at international level, with selection based on athletes’ potential to medal at Tokyo 2020 or Paris 2024. In total, 68 athletes have been named on the programme for the coming year.

Congratulations are due to all those selected, their coaches and the clubs that contributed to bring them to this level. 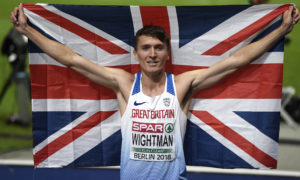 For new and returning picks Neil and Steph, it comes at the end of a superb year, with Neil reaching the 1500m World Champs final on the back of a British Championship title, and Steph setting a new Scottish Marathon Record at Frankfurt Marathon in October.

For Jake (pictured) the move up to Podium level comes after his 5th place finish – and new Scottish Record – in that 1500m World Champs final.

scottishathletics Director of Performance and Coaching, Stephen Maguire, said of the tally: ‘It’s well justified, merited and it’s a nice reflection on the summer that Scottish athletes have had on the track. None of it’s been a surprise, and I’m very, very happy that we have 13 people who are represented on the programme.

‘If you look at Neil, some people would say that he was the surprise of the summer, to make the GB team for Doha and then particularly getting to the final and having pretty much a perfect summer in that respect – although he’ll be a little disappointed with what he did in the final – but to make the programme actually shows British Athletics’ trust in Neil to be able to get the job done.

‘He was British Champion… and that reflection now coming onto the programme has to give him a tonne of confidence moving in to what is going to be a hugely important season for everyone.’

Watch to find out what Stephen has to say on the rest of the WCP picks for this year:

The Scots selected are: