There were strong performances from Scottish athletes at the British Cross Challenge and Euro Cross trials at a muddy Liverpool.

As things stand, automatic selection place for Lisbon next month have been secured by:

*Sol Sweeney of Glasgow Uni after fourth place in the Men’s U23 race.

Sol has raced for GB before but it is first vest at this level for Megan and for Hamish after terrific performances already this season culminated in those good runs on Merseyside.

Congratulations to these athletes and their families and coaches!

Further, we believe at least four other Scots very much in the mix for the discretionary places ( with British Athletics to name teams on Tuesday)

Fingers crossed for these athletes in the selection deliberations! 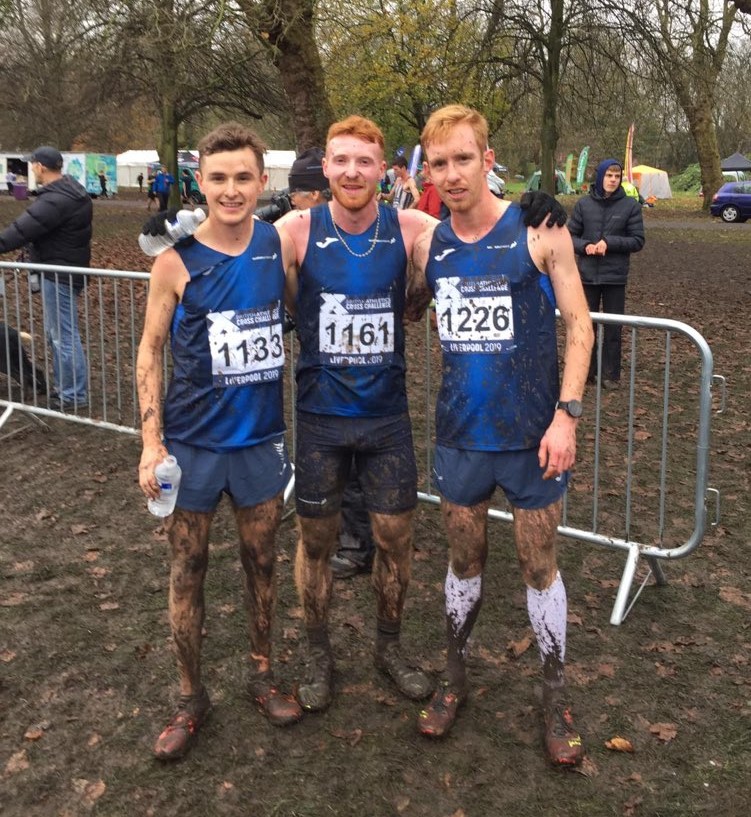 After the battle . . . Jamie Crowe, Jonny Glen and Ryan Thomson after representing Scotland in Liverpool

Welsh athlete Kris Jones, of Dundee Hawkhill and a regular on the Scottish endurance scene, is also confirmed as an automatic pick for the Senior Men’s team for Lisbon – after finishing seventh overall but with three U23 men ahead.

Overall, the performances by Scottish athletes show up well to scrutiny.

In the Men’s Senior and U23 race, we make it no fewer than eight Scots in the top 35 with good runs from the likes of Jonny Glen as well as those already mentioned.

In the Men’s U20 race, we make it 10 Scots finishing in the top 50 in Liverpool – again, a really good demonstration of depth.

Unfortunately, a couple of DNFs did affect the picture somewhat in the women’s Senior and U23 race. Nonetheless, our Scotland picks at U23 – Annabel Simpson (12), Kerry Macangus (14) and Holly Little (15) all finished in the top 15.

In the U17 Women’s race, Scottish athletes went 1-3-5 thanks to the efforts of race winner Anna Hedley of Fife AC, Hannah Anderson of East Kilbride and Julia Cash of Giffnock North.

Kilbarchan’s Oliver Patton was second in the U13 Boys race, with Craig Shennan of Giffnock in third. Isla Thoms of Fife ACwas fifth in the U15 Girls race.