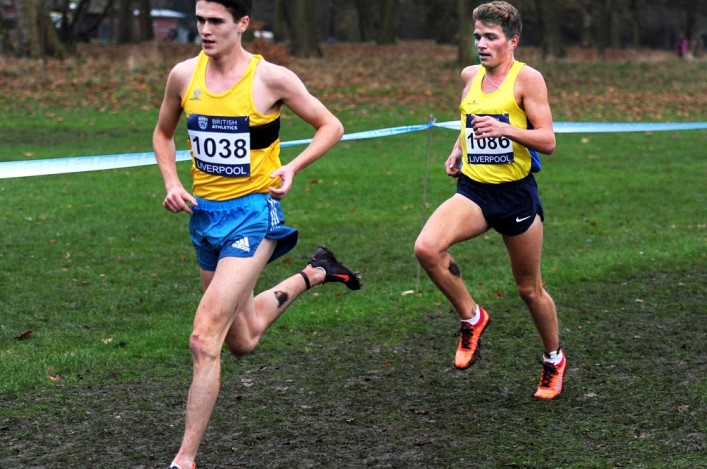 Callum Hawkins and Andrew Butchart – Scotland 1-2 at the trial. Photo: by Mark Shearman

The Boys Brigade website for Scotland has a comprehensive ‘Hall of Fame’ section for National event winners stretching back almost 40 years to 1975.

Unfortunately, while the list covers competitions such as badminton, table tennis and chess, there seems to be no record of the annual cross country championships.

Which is a great pity when scottishathletics has it on good authority that half of Scotland’s representation in Team GB and NI for the Euro Cross in Bulgaria this weekend have Boys Brigade titles against their names on their ‘racing CV’.

Callum Hawkins, Andrew Butchart and Jonny Glen all savoured memorable medal moments in their formative years in the sport – Inverclyde AC’s Glen in fact collected his gold from a former Prime Minister a couple of years ago. (Clue: the event was held in Kirkcaldy).

It is just one way of recognising that by retaining promising youngsters the sport can benefit and flourish at a higher level and of course Luke Caldwell, Steph Twell and Rhona Auckland complete the Scottish lineup for Team GB and NI’s trip to Samokov.

With Butchart, Caldwell and Twell all competing at Senior level on Sunday, and Hawkins and Auckland looking to have possible podium potential at U23, there’s a real feeling that the endurance community here can feel an impact is being made at elite level.

For Twell it is yet another return to an arena she knows so well with this her ninth appearance at the Euro Cross – with the Delhi Commonwealth Games medallist named as GB captain for the event.

Hawkins, Auckland and Caldwell were all there in Serbia last year, like Steph, while it is a debut trip for Butchart and Glen. Callum and Rhona were each seventh last year at U23 while Luke was fifth in the U23 race but has now stepped up to Senior.

‘I did win a Boys Brigade title way back in my early days in the sport – but I was lucky because Callum wasn’t around that particular year, although I know he won them as well around that time,’ laughed Butchart.

‘I knew he was the man of the moment back then and I was worried about facing him; so it was a relief to win with him absent. I think it was maybe about 2008.

‘That was probably one of my very first victories in athletics and, even at that level, it gives you a wee taste of winning. We will maybe have a chat about that in Bulgaria because I didn’t know Jonny Glen had won BB titles, as well.

‘I’m excited about competing for GB in a Euro Cross. After Liverpool, when Callum beat me at the finish, people were asking me if it was a case of congratulations or commiserations.

‘It was definitely ‘congratulations’ because my goal was to get selection and it was a really good race. With Luke finishing fourth, it was three Scots in the top four and I don’t know when that has last happened for the sport in this country in a big British cross country race.

I’ve said before that adopting a better attitude in training has helped and now I’m going down that road, there’s no turning back. You have to test it and see what level you can reach.

‘Conditions could be pretty cold in Samokov I believe but I guess we are used to that in Scotland in mid-December. I am really looking forward to it.

‘I went along to the East Districts for a while on Sunday to watch the end of the U20s and the Men’s race and, of course, training is a little bit lighter this week. I’m flying to London on Friday with Rhona Auckland and then we all head to Bulgaria later that evening.’

The six Scots in the 36-strong Team GB and NI represents 16.66 percent and only once in the past 15 years has the tally been topped in terms of Scots at the Euro Cross, with seven having featured back in 2009.

Since 1996 there has only been ONE Scot involved in the Senior Men’s race when Andrew Lemoncello featured in that 2009 group. You can view Scots in GB Teams at Euro Cross – previous years (Excel 45kB) to see those teams in more detail.