Patience pays off for Glen 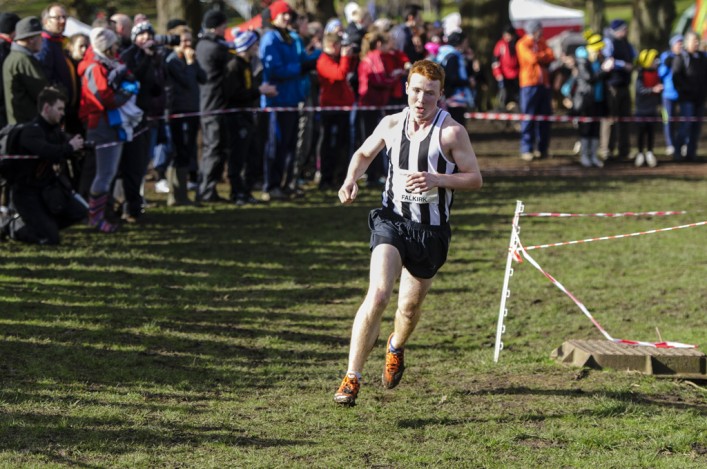 Watch highlights of that Falkirk race

In truth, he doesn’t need all that long a memory with the Greenock teenager having finished 18th in the National Cross Country Champs at Falkirk as recently as 2011.

Joining Inverclyde’s lineage of GB Junior Internationals must have seemed as distant as the 1569 miles between Clydeside and Samokov, Bulgaria.

But that’s where he will pull on the Team GB and NI vest on Sunday week in the Euro Cross with his appearance in the Men’s U20 race a truly inspirational example of what can be achieved by hard work and commitment over a number of years, with steady progress blossoming spectacularly and the sacrifices of searching for tracks while on a family holiday now feeling all worthwhile.

‘I do feel as if I was a bit of late developer and there were times a few years back when I wasn’t even competitive in terms of Scottish titles,’ Jonny told scottishathletics.

‘I remember that year of 2011 in particular and I wasn’t happy that I couldn’t finish higher up or get better times.

‘But I made a big breakthrough the following year both in cross country and on the track and hard work in training began to pay-off. Maybe it proves you don’t necessarily need to win everything going at U13 and U15 level to do well at a later stage, I don’t know.

‘I’ve had fantastic support from my parents, Karen and Morris, over the years, a great training group at Inverclyde AC and my coaches, Ian Cameron and Mark Pollard.

‘To win a GB vest for the Euro Cross was definitely a dream – a goal that we’d discussed for this season – but it was still so exciting for it to actually happen.’

Glen’s call-up for Bulgaria comes after a typically determined finish in the Euro Trial at Liverpool when he recovered from around 20th place at halfway in the 6.7k race to finish eighth – with two ineligible athletes above him and a team of six to be selected for Samokov.

‘I thought at halfway on Saturday that the chance of making the team was long gone,’ said the 18-year-old bluntly.

‘There were a few guys ahead of me and they’d been pretty quick so all I could think of doing was trying to pick up a few places and finish strongly. I couldn’t tell you who I went past and, after I finished, I barely knew what place I was – my dad said he thought eighth or ninth.

‘The winner of the race was an Eritrean who was not eligible for GB but it was only a bit later on Saturday that we realised there was an Irish athlete in third (Kevin Mulcaire, already picked for the Euro Cross by Ireland).

‘I’d a sleepless night after the race and again on Sunday night. I went training after work on Monday (Jonny is an apprentice electrician) and when we came in from our run, Mark (Pollard) asked me if I’d heard anything because he knew British Athletics were making calls. I checked my phone and my mum had texted me to say they had phoned the house to tell us I was selected.’ 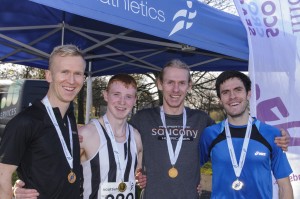 It’s clear all at Inverclyde AC will share in Glen’s glory. And rightly so at the scottishathletics Impact Club of the Year for 2014 following our recent Awards Night.

He came through the ranks of Run, Jump, Throw with Janice Hendrie – ‘I was a bit of a character when younger and only wanted to run – so Janice moved me up quite quickly’ – and hard work with training partners has helped him progress. And good coaching from Cameron and Pollard.

The club was formed in 1996 with the likes of Chris Robison and Tommy Murray among the leading lights. Pollard won a GB U20 vest in 2000 and Craig Ruddy did so in 2007. There’s a seven-year itch in Greenock, it would appear.

‘It is a good environment at the club,’ said Jonny.

I train with some great guys and while they might not quite be at the same level as me at the moment they are helping me get better and I appreciate that help.

Athletics loses a lot of people at 16, 17 and 18. There are distractions and I think any athlete who tells you they never think about quitting is lying. You hit a bad patch and it is really difficult.

‘But I just adore running and I think it would really foolish to waste the talent I have. I want to make the most of it if I can and that means a few sacrifices along the way.

‘I run when we are on holiday and we’ve had the family searching for tracks in various places so we can keep doing sessions.’

Glen was ranked at a lowly 58 in Scotland for the 800m and 25 for the 1500m back three years ago. English rivals he faced on Saturday have rapid track PBs with one rated better than Mo Farah over 1500m and 3000m when an U15.

‘Some of these guys have insanely fast track times. But, now I am with the team, my main aim will be to try and justify my selection – and that means simply trying to beat at least one of the other GB athletes out there. I’ve looked at past races and the Brits usually do pretty well so, if I could do that, it would probably be a decent performance.

‘It does feel like winning the vest is the result of years of hard work but I also hope it is the start of something. I want to win one as a Senior athlete in a few years.’

In that 2011 National Cross at Falkirk, Jake Wightman finished 17th at U17. And, in December that year, when scottishathletics last made a similar type of interview-request phonecall to an emergent young Scot called up to U20 for the Euro Cross,  the recipient was . . . Laura Muir.