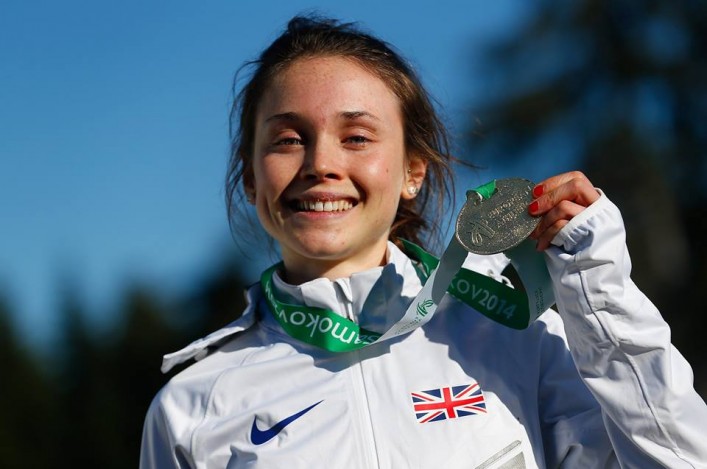 Video interview with Rhona by Feidhlim Kelly of www.jumping-the-gun.com

Rhona Auckland is European Cross Country champion after a superb personal performance on a good day for the Scots in Bulgaria.

The Scottish XC champion delivered a superb U23 gold medal for Team GB and NI -as she emphatically improved on her seventh place finish in the same age group a year ago.

And it was three top ten finishes in all for Scots in Samokov, Bulgaria, with Callum Hawkins and Steph Twell in the hunt for medals until late in their races.

Hawkins was firmly in contention for the podium in the Men’s U23 but finished fifth with a Russian 1-2-3 and Britain’s Jonny Hay just passing the Scot on the final run-in.

There were silver medals for GB and NI in the team race. Experienced Twell had the honour of captaining the overall GB team and she had a good run to finish seventh in the Senior Women’s race. Gemma Steel won that one in the final metres from team-mate Kate Avery and that helped ensure team golds – as Twell picked up yet another medal on her ninth appearance.

Andrew Butchart finished 35th in the Senior Men’s race with Luke Caldwell in 40th place with Team GB and NI just missing out on the team medals. Central AC’s Andrew was the fourth counter for GB.

Jonny Glen’s debut at this level featured a 46th place finish in the U20 Men’s race with the Inverclyde AC athlete the fifth-placed Brit.

But the Scottish headlines belong firmly to Edinburgh University medical science student Auckland, with individual medals rare at the Euro Cross for Scots with Twell having won Junior honours prior to declaring for Scotland.

Rhona, who led GB to team silvers and is a first Scot to win a medla at U23 level, said: ‘I’m absolutely delighted – I knew my strength was in the endurance side of things as I haven’t got the fastest start.

‘I think the course was challenging enough to hold back and work my way through and I’m glad I did that.

‘I didn’t think I come here and challenge for the gold. I was hoping to better on last year, which was seventh and I knew Emelia (Gorecka) would be strong. I just tried to stick with her and run a race like she does – I was pleased to be able to do that..

‘It was really inspiring on the start line as we heard the junior girls on the podium to the national anthem so it was great to keep that going.’ 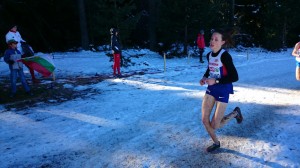 Rhona’s coaches, Joyce and Ken Hogg, were in Bulgaria to watch her and were absolutely thrilled for the 21-year-old – and that excitement spread across the athletics community via scottishathletics social media on Sunday.

Ken said: ‘It was a quite brilliant run from Rhona. We were quite close to the course and able to see her and, at one stage, I was just about to shout to her that the time was right to try and force it on and break up the pack.

‘But, as I went to shout her that advice, she broke clear anyway! She judged it all so well and I think she ran a very good race tactically – she was completely exhausted at the finish.’

Hawkins led the U23 race for a significant period – revealing later he had taken it on a little reluctantly. But when the Russians surged on towards the end the pace was a little too much for the Scot, who hasn’t been in peak fitness in the countdown to the race.

Callum’s run drew fulsome praise on BBC from Steve Cram and Paula Radcliffe. He said himself: ‘I’m disappointed – I was going for a medal. I didn’t have a hamstring injury but I suffered hamstring problems in the last week which probably affected me a little bit at the end.

‘I tried to make it as hard as possible by trying to take the kick out of people and unfortunately it didn’t quite work but I went for it and that is all you can do.

‘I didn’t want to hit the front as early as I did but the guys at the front were slowing it down and no one was taking it on so I thought I’d try and make it hard.

‘I was just trying to put in the same performance as I did in Liverpool, I didn’t feel any pressure from winning there. At the end of the day, I did my best and that is all you can do.’

Coach Robert Hawkins, who was in Samokov, said: ‘We’re really proud of him for putting in that kind of effort. The course and the conditions were unbelievably tough and he went for it in many ways. The Russian trio came up with a real burst of pace and that ensured the medals.

‘We’re very happy with Callum’s progress This is his last year at U23 so he’s moving up to the Senior Men category next year and he will be another year stronger and fitter.’ 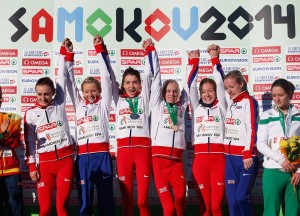 Twell was delighted with her solid run and seventh place in a race where bronze was up for grabs after Steel and Avery forged away to contest gold and silver to the line.

‘I think leading up to this race, I was looking for my highest position at Europeans as a Senior and I managed it,’ said Delhi Commonwealth Games medallist Steph.

‘I was on the cusp of a medal and that was getting back to the old Steph and mixing it. I had to work hard – the laps were so tough and relentless so you really had to focus on your stride.

‘So I am super happy and super happy for the team with Gemma (Steel) and Kate (Avery) up there. It was a great honour to be captain and I knew out there people would be relying on me and looking up to me, so I had to keep hurting myself out there because it’s painful out there in those conditions.

‘I just wanted to put a strong performance out there to keep the buzz going for the men after and I did that.’

Butchart, who has had such a good cross country season, was reasonably content with his performance, which featured a strong start.

‘It was tough today, the course was very tough,’ said the Central AC athlete, who was only 11 seconds shy of a 25th place finish.

‘You didn’t really notice how many hills you had to climb up but it was a true cross country race. I’m glad I was in the senior race and very happy with my run.

‘I went out fast but tried to keep up the pace. Ross (Millington) ran really well which was good to see. I’m glad Rhona (Auckland) got the win, too, so it’s been a really great day for the British team.

‘I’m happy with how I ran – obviously I would have liked to have finished higher up but up in altitude, you aren’t sure how you are going to cope. I’m much more out of breath than I usually am after a race so it has taken its toll on me. We’ll have to see how it goes next year when we are closer to sea-level.

‘It definitely gives me a lot of confidence and hopefully I’ll be pushing for more teams in the future. I’ve picked up a level but I am still learning and want to keep that up. ‘

Caldwell came home in 40th in his first outing at Senior level after a fifth place last year at U23.

Glen was 46th in a race which had 105 starters and 97 finishers with the Inverclyde AC teenager the fifth Brit home after being selected at number six following the trials in Liverpool. It was a measure of the depth and competition in the Junior Men’s that Jonny was only 20 seconds short of the top 25 on the day.