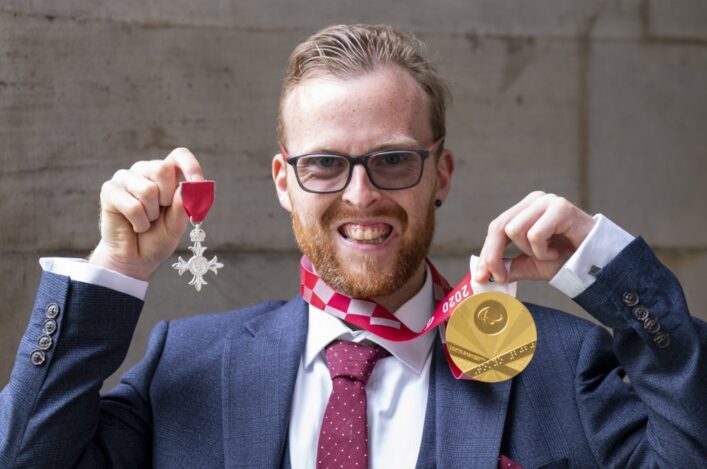 Paralympic gold medallist Owen Miller brought along a special medal to training the other night – his MBE.

On his Paralympic debut, the popular Scot blew away the field in the T20 1500m final with a stunning performance which captured the imagination and admiration of the athletics public in Scotland.

Owen was at Holyrood earlier this week to receive the MBE from Princess Anne and later that day brought the cherished medal along to training at Pitreavie to show coach Steve Doig and the rest of the group.

A very special day for Owen today as he received his MBE from Princess Anne at Holyrood Palace. Here he is showing it to his training partners this evening at Pitreavie.

There were good Scottish performances in the Para events at the Muller British Champs.

And we’re pleased to be able to share video footage on the Men’s 1500m event which saw a win for Steven Bryce of VP-Glasgow.

The T20 athlete stormed clear of the field and stayed out in front with Derek Rae, who is now one of Steven’s training partners in a group led by coach Steve Doig, landing a PB in fourth place.

Melanie Woods, selected for the Commonwealth Games, competed in the Women’s Wheelchair 400m where she took second place to land the silver medal.

Kyle Brotherton and Luke Deighan competed in the men’s one lap Wheelchair race.