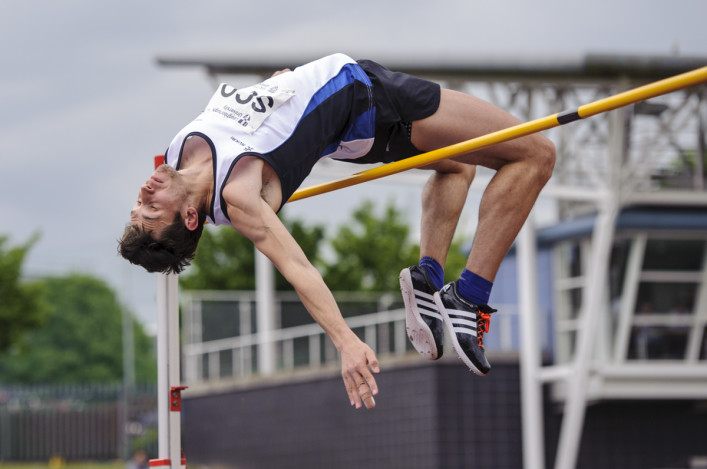 Jake Wightman was an impressive Scottish winner at the Loughborough International on a day when personal performances by athletes across four different teams commanded attention.

Ultimately, we tallied 10 PB performances and six event wins by Scots competing in the Paula Radcliffe Stadium. In the match, Scotland finished seventh – although fielding a smaller than usual team mitigated.

Wightman, representing the host university, took command of the Men’s 1500m from the bell and clocked 3.40.86 to win.

‘It was a bit quicker than I thought it might be and it was good to get the win since this is my last year as a student athlete with Loughborough,’ said Jake.

‘Now I just want to get in the right races between now and the British Trials and see if I can get that olympic standard at 3.36.20. The European Champs one is there, too, at 3.38.50 so there’s lots to aim at – but time is counting down to Birmingham.’

David Smith was another winner in the high jump match at 2.21, while Chuxx Onya won the triple jump with a PB of 15.47m. Remarkably, he did that on his first jump before succumbing to injury. 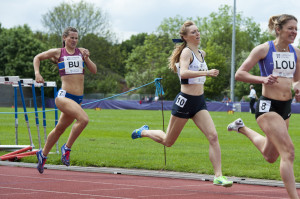 Mhairi Hendry and Katy Brown in the Women’s 800m

Cameron Tindle ran a quick 200m in GB colours for 20.75, atlhough the wind-speed of plus four seconds definitely helped! It was a good day for Scottish sprinters, with Beth Dobbin setting a PB at 23.82 in the 200m.

Jenna Wrisberg ran a PB of 11.79 in the 100m Match to finish seventh. That run also takes her to second on the all-time list for U20.

‘I’m delighted because one of my goals was to get under 12,’ said Giffnock North AAC athlete Jenna, who is coached by her dad, Alan.

‘I felt good coming into the race and as I crossed the line I was pretty sure I’d managed a PB. But it was brilliant to see that 11.79 on the Results sheet.

‘I am still at high school so am doing exams at the moment. I’ve tried to do a big of studying here this weekend but it is not that easy when your mind is on representing Scotland. I’ve a Business exam coming up on Friday.’

Sprint hurdler Heather Paton was another to PB, getting under 14 seconds for the first time with 13.86. Aberdeen AAC athlete Stephen Dunlop clocked 10.65 to win one of the 100m Guest races. He said: ‘I am gutted with that wind speed. That would have been my first PB since 2012. But I know it is there.

‘I needed a change after being in Aberdeen for six years and now I am working in central Scotland and training in Glasgow. Being coached by Chris Baillie helps. I am in Dublin next week so hopefully there I will get a legal PB.’ 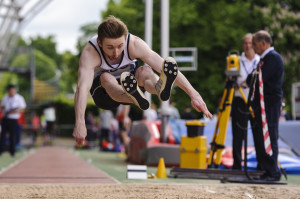 James McLachlan in the long jump

In the 400m Hurdles races, Jack Lawrie was fourth in 51.91 and Mhairi Patience was fifth in 60.00. Aileen Rennie was disappointed with her javelin performance at 42.83 for seventh place.

Sinclair Patience threw for Scotland for the first time, 30 years his dad featured in the discus at the 1986 Commonwealth Games, but didn’t manage to improve his shot PB.

Two athletes who really performed when it counted were Ben Stevenson in the 3000m and Stacie Taylor in the 3000m steeplechase.

Ben clocked 8.06.32 and said: ‘My PB was in a British League match at 8.15 and I was pretty confident I could break it. There were guys in there who have run sub eight minutes so to get third in the race and a PB means an awful lot.

‘I ran well in Manchester over 5000m for a 14.13 PB last weekend and took that form to Loughborough.

‘I’m delighted to represent Scotland and my coach, John Pentecost, pointed out to me that I’ve now had three in three disciplines in 2016 with the Armagh Road Race and a late call-up to the Home Countries International XC.’

Tulsa-based Stacie, the Kilmarnock Harrier and Glasgow School of Sport developed athlete, took more than 10 seconds off her PB and finished second place for Scotland in the Women’s steeplechase. 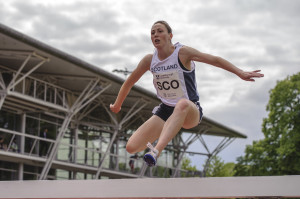 In the Women’s pole vault, Anna Gordon‘s GB debut was cut short through injury after clearing 3.75m. Courtney MacGuire also cleared that height while Henrietta Paxton, competing for Loughborough, was at 4.10m to win her event.

Mark Dry was second in the hammer competition, wearing a Loughborough vest, with 73.72m as Chris Bennett threw 73.32m. Rachel Hunter was fourth in the Women’s hammer with 60.96m.

‘It is frustrating because I feel pretty good otherwise but I’ve a few more comps and some training to do now before the Olympic trials at the end of June,’ said Dry.

‘Myself and Chris Bennett have current standards for the Euro Champs in Holland so that is very much a target, as well as Rio.’

Jamie Bowie did well for GB as part of a 4 x 400m guest international lineup which was won by the British men. Among those athletes guesting who were pleased with their performances would have been young 400m runner Lewis Brown; 1500m runner Jemma Reekie and Seniors Anthony Young and Martin Lipton.

*Apologies if there is a significant performance omitted within this report. 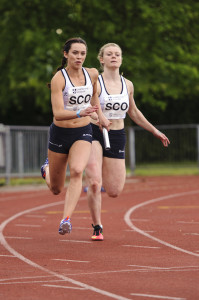 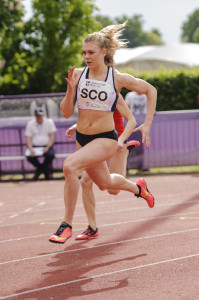 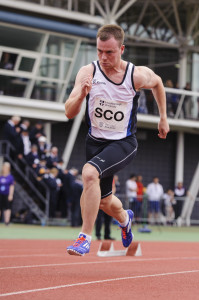 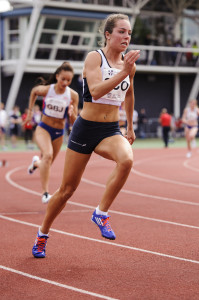 Sprinters in action for Scotland