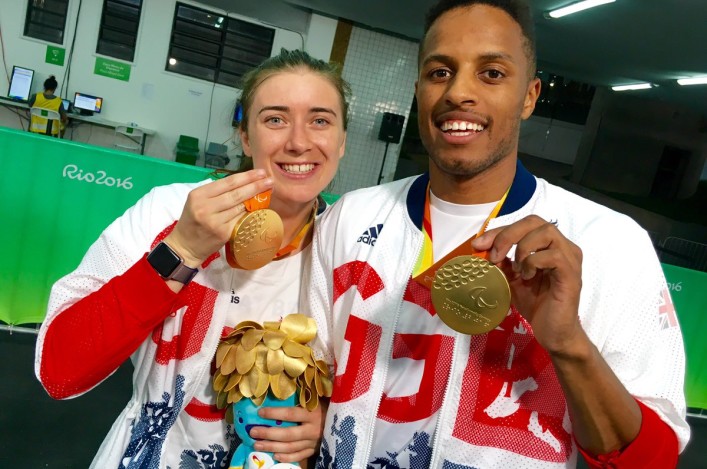 Schedule for Scots in Rio

Scottish athlete Libby Clegg is a double Parlaympic champion – after another superb performance in Rio.

The T11 100m champion followed up her success in that event with victory and a Paralympic Record in the 200m with guide runner Chris Clarke at her side in Brazil.

The 24.51 run was a new Games record, after a tricky start which saw Brazilian Terezinha Guilhermina disqualified for a false start – but that didn’t shake Clegg as she stormed her way to a decisive win.

In the T11 100m, of course, the duo had set a World Record in the semi-final before then winning gold so with the 200m title added it has been an extraordinary few days for Libby.

Libby told the C4 after her medal ceremony:  ‘I’ve massively surprised myself – obviously I’ve had a really tough year not being on funding, and through injury – it’s been a really tough year and if you’d asked me nine or ten months ago I’d probably have told you it wasn’t possible.

‘When I was reclassified as a T11, I was quite daunted by it, because being blindfolded is obviously quite different from using the sight I do have . . . but Chris has been absolutely amazing.

‘He’s such a good guide he’s really helped me get through.’ 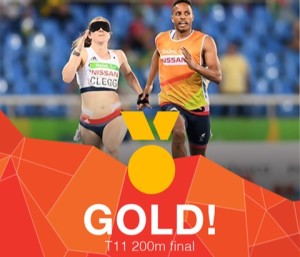 Clarke repaid the compliment, explaining the secret of their successful partnership thus: ‘We’re friends and we just trust each other, we go out there and get the job done.

‘It’s just inspirational to see what she’s gone through for the past year and to be part of that journey just inspires me in my career – I’m just glad to be a part of it.’

And good news for fans of the pair – they said they were looking forward to competing together again at London 2017.

“It is a dream come true; I am absolutely over the moon,’ added Libby.

‘The 200m is actually my better event and I love it so I’m so happy that we took the gold in this one.

‘London 2017 will be exciting – we definitely know we can go faster. I obviously didn’t get a PB today so that is something we will be working on. Same in the 100m; I had a shocker of a start. so we can go even faster in that one as well. Competing in front of a home crowd again will be great and I will thrive off that.’

All at scottishathletics send our warmest congratulations to Libby and Chris, their families, coach Joe McDonnell and all the support staff with Paralympics GB on a tremendous double achievement. 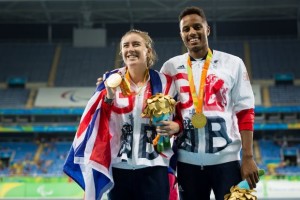 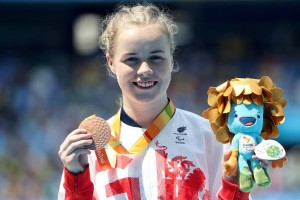 It was medal No 5 for the Scots at the Paralympics as Maria Lyle took third in the T34 100m final.

Maria clocked 14.41 to win the bronze medal with the gold contested by Australian Isis Holt and Chinese athlete  Xia Zhou in a tight finish. Zhou took it in a new Paralympic record.

Lyle, who still has two events to come in Rio said:  ‘I’m so pleased to have won a medal. It’s great to come here – this is one of my biggest achievements. I’m not your normal teenager but I get a lot of great opportunities and to be running on this stage is brilliant.

‘It wasn’t the best time – it was a bit slow and I could have executed it better. I just need to focus on my technique because it was a bit shabby out there.’

Congratulations to Maria and her family and coach on a medal in her first Paralympics at the age of 16 and good luck for the 200m and the relay!

Jo Butterfield finished fifth in the F52 discus event with a Season’s Best throw at 9.40m – but had been struggling with an injury which threatened her involvement in her second event in Rio.

‘Yesterday I didn’t think I would be competing here so to be out there was a relief,’ said Jo.

‘I have got to say a massive thank you to the medical team, I have had an iffy shoulder but they got me out there and I was determined to at least put a mark on. Actually I came out with a season’s best, so I am happy with that.

‘The other girls are better than me at the moment so I would have struggled even with a fully fit shoulder. It was enough to call it a day at three throws. It’s a sad way to go out but I do get to go home to a gold medal (from the club throw) and that’s what I keep having to tell myself.’