*Further details (including Masters medals) to be added in due course. Subject to alterations.

Double Olympians Laura Muir and Andy Butchart went back to their grassroots at the Lindsays Short Course XC Champs – and backed up their pre-race status as favourites at Lanark Racecourse.

Strong winds and driving rain buffeted the South Lanarkshire venue but the two Olympians refused to be blown off course.

Tokyo medallist Muir swapped the track for the mud to claim gold for the fifth time in her career in this particular event.

And Butchart won his battle with fellow Olympian Jake Wightman, his Central AC team-mates and all-comers to win the Men’s race over 4K for the fourth time.

Olympic silver medallist Muir had won this title previously at Bellahouston Park, Renfrew and Kirkcaldy and a trip to South Lanarkshire proved no problem in her first appearance on Scottish soil since early in 2020, when she raced indoors in Glasgow.

After a cautious first 2k lap, during which she stayed with three other athletes to help combat the wind, the 28-year-old broke clear to win by nine seconds in 13:09.

The real battle was for silver as Morag Millar of Central AC pipped Glasgow Uni’s Eloise Walker on the line (both timed at 13:18).

Megan Keith of Edinburgh Uni Hare and Hounds was fourth to claim the U20 Women’s gold.

That podium was a green clean sweep (for EU Hare and Hounds) with Isla Calvert taking silver and Hannah Anderson the bronze.

‘It was hard,’ smiled Laura. ‘It was really windy so I tried to tuck in a bit on the first lap and then tried to stretch my legs more on the second lap and get clear.

‘But that’s cross country in Scotland at its best I think – wet, windy and very muddy so was really good.

‘I loved Lanark Racecourse as a course and I’ve not raced the Short Course XC Champs in quite a number of years so it was really lovely to be back regardless of the venue. This was a new place for me and it was a good course and worked well for athletes and spectators.

‘Nothing beats racing at home and I think nothing more than cross country as well, where it kind of all started for me.’ 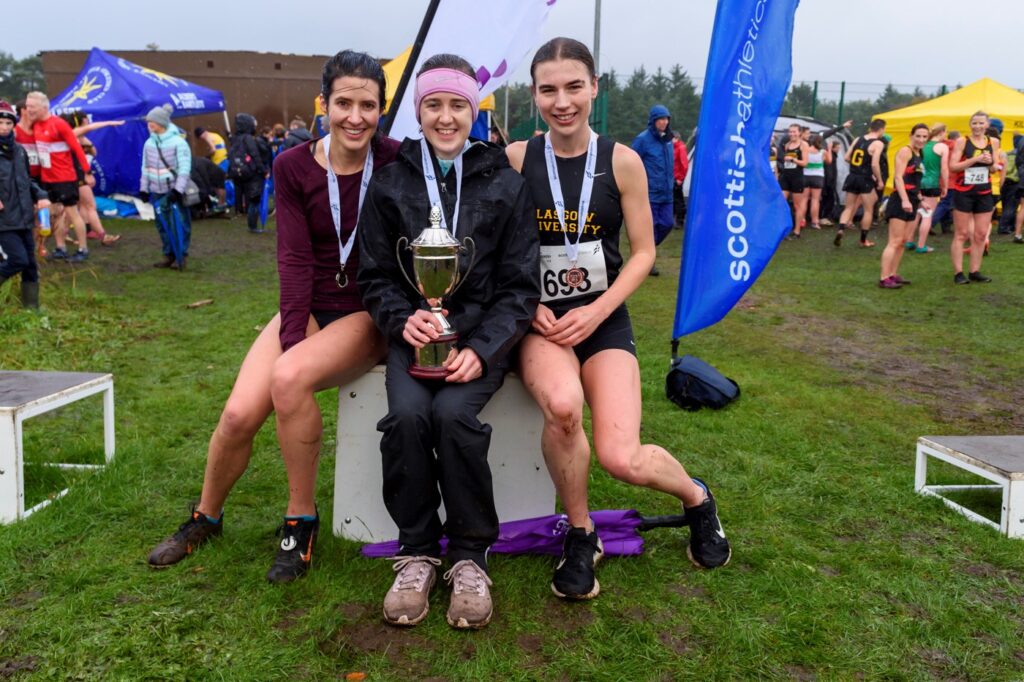 Butchart for his part took a fourth win in this event after previous successes in 2015 and 2016 and then in Kirkcaldy in 2019, when it was last staged prior to Covid-19.

He held off the challenge of his Central AC club-mate Jamie Crowe to win by six seconds in 11:47 to Crowe’s 11:53 with Lachlan Oates of Shettleston Harriers taking a fine bronze medal.

‘Jamie Crowe is pushing me really hard in every single session we do together now,’ grinned Butchart, back training with his club at Stirling on a regular basis.

‘So it is nice he was still behind me. I enjoyed that and there was really good depth in the race. The top ten was highly competitive and I think there are some promising signs for athletics in Scotland with the talent coming through.’

Sol Sweeney of Perth Strathtay took fourth place and a fine run by Ben MacMillan of Central AC took him to fifth and gold in the U20 Men’s category. Andrew McGill won U20 silver and Kane Elliott the bronze.

Central AC won the team race once again with silver medals for Edinburgh Uni Hare and Hounds and bronzes for Cambuslang Harriers. 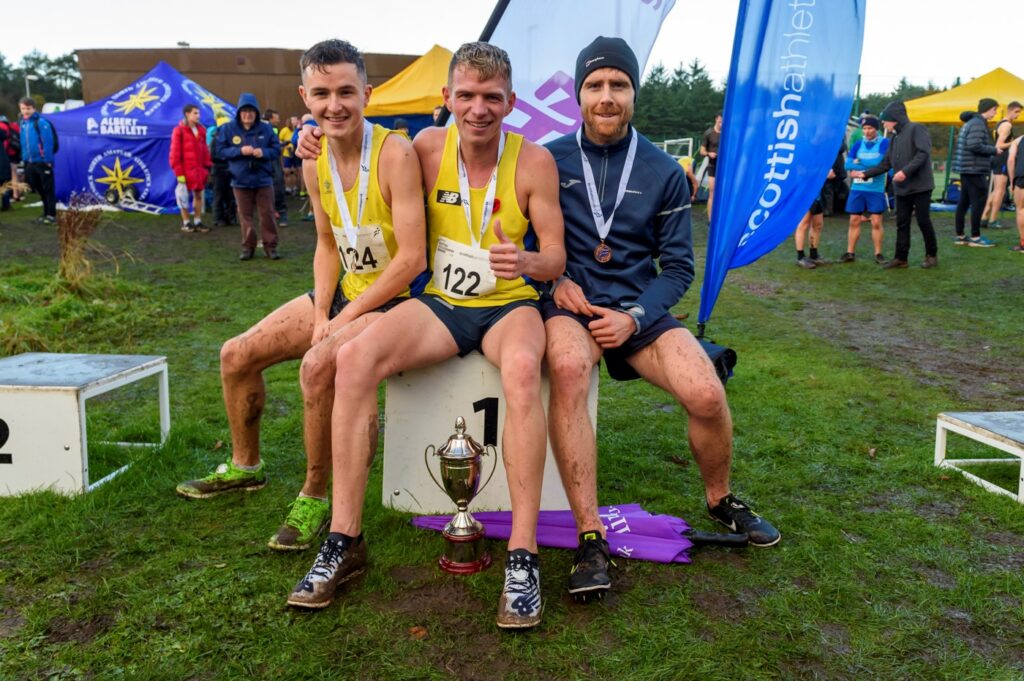 Our Masters athletes were competing for individual medals at Lanark – via 10-year age brackets.

Jill Stephen of Hunters Bog Trotters took the W40 gold with the other medals claimed by Lesley Bell of Garscube and Avril Mason of Shettleston Harriers.

Janet Dunbar of Edinburgh Ac won the W50 gold with the other medals headed for Allie Chong of Giffnock North and Ana Richardson of West End Road Runners.

In the W60 category, the gold medal was claimed by Fiona Matheson of Falkirk Victoria Harriers with the other medals secured by Frances Wood of Linlithgow and Phyllis Hands of Motherwell AC.

And there was a W70 gold for Ann White of Garscube.

Jim Tole of Metro Aberdeen took gold in the M40 category and the other medals were claimed by Gordon Robertson of Cambuslang and Scott Brember of Central AC.

Our M50 champion was David Gardner of Motherwell AC with silver for Stephen Allen of Cumbernauld AAC and bronze for  Stuart Robertson of Perth Road Runners.

In the M60 cateogry, there was a win for Jeff Farquhar of Pitreavie AAC with the other medals landed by Paul Forbes of Edinburgh AC and John Oates of Shettleston Harriers.

Ed Norton of PH Racing was our M70 gold medallist with silver for Frank McMahon of Greenock Glenpark Harriers and bronze for Eric Stevenson of Edinburgh AC. 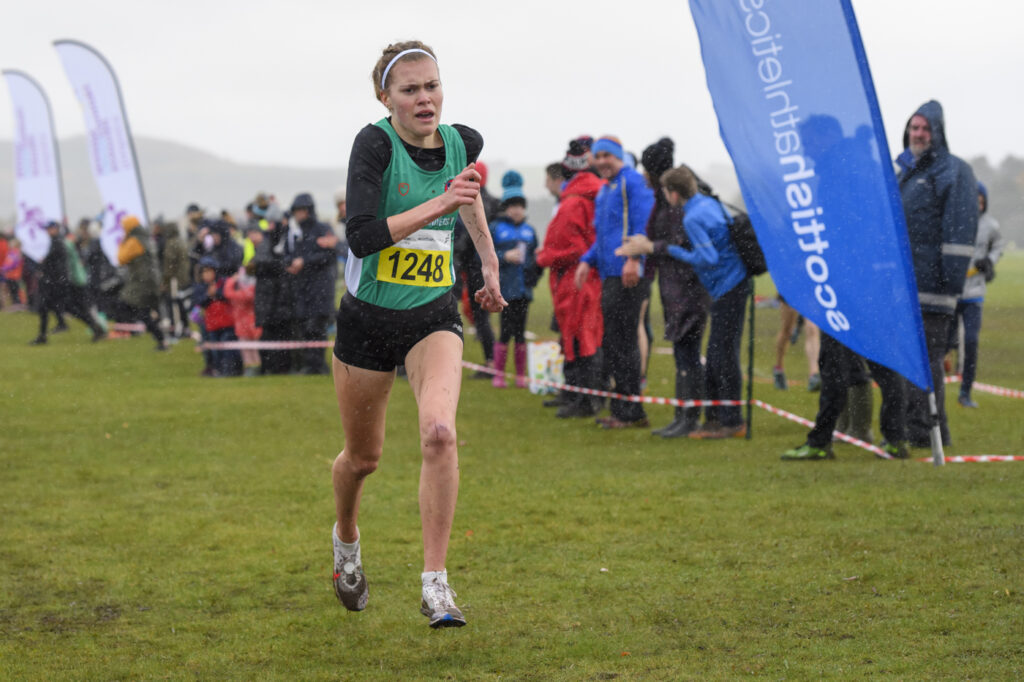 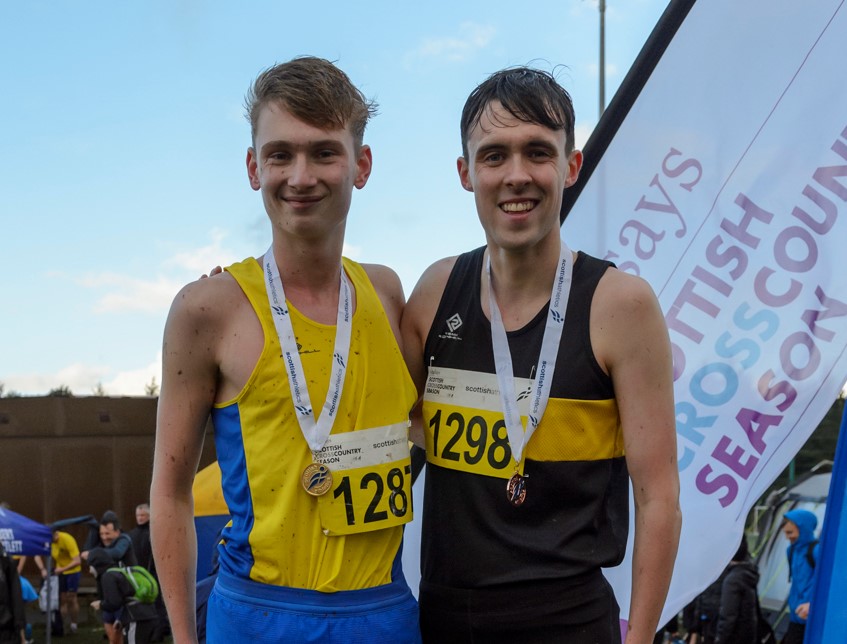