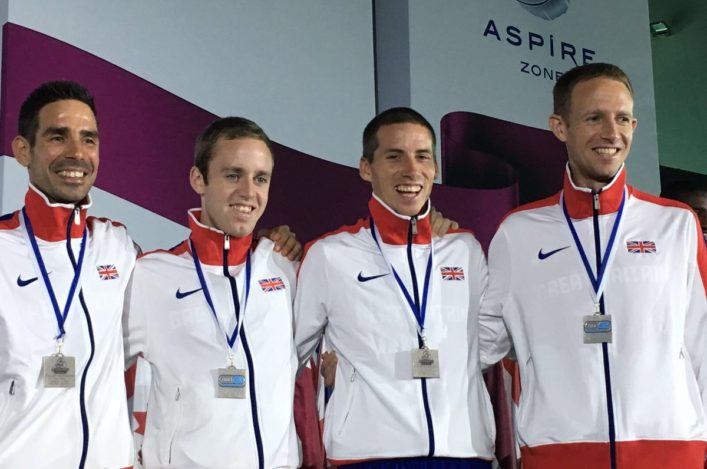 Another global event, and another top 10 finish for a Scottish athlete!

Many congratulations from all at scottishathletics Ross Houston on a fine 7th place finish in the men’s race at the IAU World 50K Champs in Doha, after 20 laps of a 2.5K loop.

Glasgow 2014 marathon runner Houston clocked 3.01.33 in only his second race at this distance to come home just behind two of his Team GB and NI team-mates.

And that was enoughtfor the GB and NI men to collect silver medals in the team race behind gold medallists USA.

It was a first appearance in a British vest for the Central AC athlete after many years of great consistency on the domestic scene in Scotland and a marathon run at Glasgow 2014.

Ross had been selected by GB and NI previously for the World 100K Champs in 2015 but had to pull out of that event through injury. He is pictured (on right) at the medal ceremony with his team-mates (photo via Twitter) 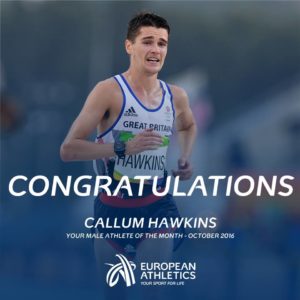 The governing body went to a poll for their Male and Female monthly awards and the Scots, who is currently in the Pyrenees for a spell of altitude training, drew tremendous support.

Hawkins smashed the Scottish half marathon record by more than two minutes with victory in the Great Scottish Run in Glasgow in 60:24. 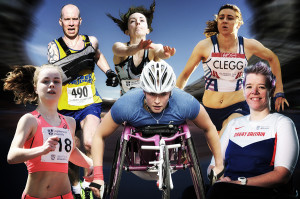 The was a double win for Scottish Para athletes at the Scottish Women in Sport Awards.

The SWiS awards were presented last Friday night and there were great accolades for two of our Paralympians, Sammi Kinghorn and Maria Lyle.

Sammi won the Scottish Women in Sport role model award while Maria was named Young Sportsperson of the Year. Congratulations to both athletes and their families and coaches !

Libby Clegg and Jo Butterfield  were runners-up in the Sportsperson of the Year category. All four are pictured in our #SALsuper6 photo montage for the Paralympics in Rio. 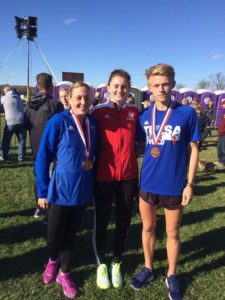 There was a superb win for Scottish athlete Luke Traynor at the Midwest Regional XC Champs in the United States.

The Tulsa Univeristy/Giffnock North AAC runner won the Men’s Senior title by 35 seconds in 30.18.46 for a 10K XC course.

Stacie Taylor, of Tulsa/Kilmarnock Harriers,  was 24th in her age group with Ayr’s Kirstin Oakley in action, too, finishing about 60 seconds behind Stacie only a couple of months after moving across the Atlantic. Results for a number of American XC championship events are online

We wish them well and indeed all Scottish athletes currently competing in cross country events in the United States . . .

Report on British Athletics website (with link to Results)

The first British Cross Challenge of the season took place at Milton Keynes on Saturday – and there were some good Scottish performances.

In the Senior Men’s race, which was won by Andy Vernon, there was a 7th place finish for Andy Douglas of Inverclyde AC and Aberdeen AAC’s Michael Ferguson was one place behind at 8th.

In the Senior Women’s race, Lothian Running Club’s Sarah Inglis was 9th and Steph Pennycook was 13th with her Edinburgh Uni Hare and Hounds team-mate Louise Mercer at 24th.

At the lower age groups, there were race wins for Giffnock North’s Hamish Armitt at U15 and Fife’s Anna Hedley at U13.