Saturday 4 September saw the annual Junior Home International in hill running take place on Slieve Meelbeg in the Mourne Mountains near Newcastle, County Down. The Northern Ireland Mountain Running Association organised a course of 4km with 393m of ascent for the event which comprises 4 races between Under-17 and Under-20 male and female teams from each of Scotland, England, Wales, Northern Ireland and Ulster, and Ireland with team scores calculated from the fastest three finishers.

Among the Under-20 females, Georgia Ledingham (Corstorphine) ran well to finish fourth, just missing out on an individual medal. Pippa Carcas (Edinburgh AC) was hot on her heels in sixth, and the team was completed by Anna Dalglish (Fife AC) in 12th and Jessica Robson (Law & District AAC) in 15th. The team was edged out to bronze medals just a single point behind the Northern Ireland and Ulster team.

The final race was the Under-20 males, and Fraser Gilmour (Glasgow VP) clinched an individual bronze in a tight finish among the first three runners. Sam Griffin (Aberdeen AC) was close behind in fifth, and with the addition of Andrew Thomson (PH Racing) in 11th and Euan Rollo (Inverness Harriers) in 15th the team achieved silver medals.

Congratulations to the whole squad for a very successful weekend. Next year’s event is to be hosted by England, who plan to use a course at Ambleside in the Lake District.

Below: Angus Wright and Georgia Ledingham in action 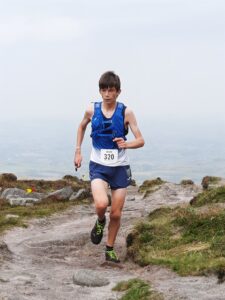 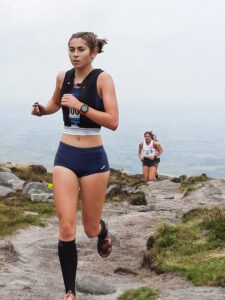 Normally a four-race series, the competition was a one-off race this year due to Covid.

Both Jacob Adkin (Keswick AC) and Scout Adkin (Ambleside AC) finished runners-up in the Championship event over 11km with 900m of climb from Dufton.