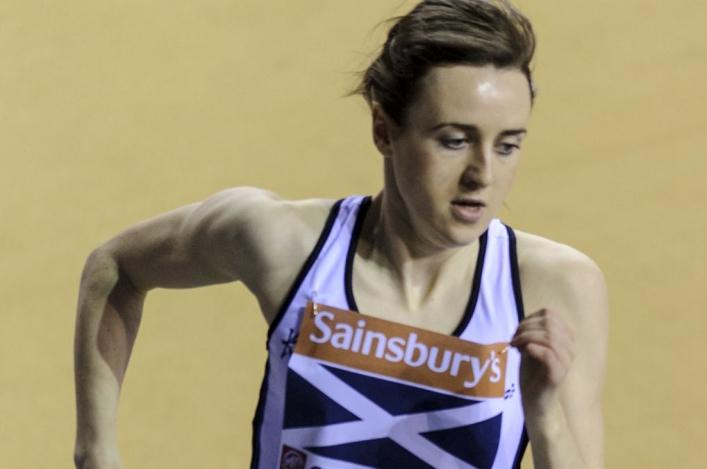 Six top Scots will compete in the Diamond League at Hampden in July.

And there are free tickets up for grabs for youngsters in a special scheme for the event, which will showcase some of the world’s best athletes to a Scottish audience.

Laura Muir has been added to the list with the European U23 bronze medallist at 1500m joining Eilidh Child, Chris O’Hare and Eilish McColgan for the main events. Para athletes Libby Clegg and Stef Reid will also compete at Hampden that weekend.

Muir undertook media duties at a Glasgow primary school on Tuesday as she joined children from St Paul’s in Whiteinch to promote what is sure to be a thrilling Hampden occasion.

Laura, who is currently studying for a veterinary degree in the city, was quizzed by children between the ages of 10-11 asked a range of questions from how many races she’s competed in to what inspired her to take up athletics 10 years ago.

‘Inviting thousands of children to go free to watch world-class athletes compete at the Sainsbury’s Glasgow Grand Prix is a fantastic opportunity to inspire the next generation as well as make for a fantastic family day out,’ said the 21-year-old.

‘This will be the final time fans will be able to see the best Scottish athletes in action on the world stage before the Commonwealth Games, so it would be great to have a full crowd at Hampden cheering us all on.

‘The Sainsbury’s Glasgow Grand Prix is going to be one of the highlights of the sporting year and it’s great to be a part of two of the biggest athletics events in the same city in 2014.’

After winning European U23 1500m bronze, the Dundee Hawkhill Harrier is aware of the pressure on her as one of Scotland’s leading hopes this summer, but believes the Sainsbury’s Glasgow Grand Prix will give her a feel for the atmosphere in the stadium and a gauge of the competition she might come up against two weeks later.

‘I got to sample the Scottish crowd earlier this year at the Sainsbury’s Glasgow International Match at the Emirates and I know this summer the Hampden crowd is going to be magnified even further,’ added Laura.

‘However, the Sainsbury’s Glasgow Grand Prix will give me that opportunity to take in the crowd and also compete against the best in the world.

‘The UK always bring together the best fields for the Diamond League events, and I’m sure that will be no different come July.’