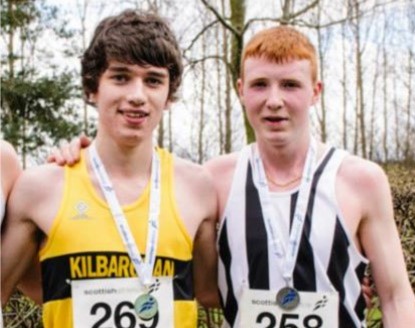 Kilbarchan’s Euan Gillham and Inverclyde’s Jonny Glen have been regulars on the podium in Scotland in recent years – now they are GB team-mates. Photo by Bobby Gavin

Two more Scottish athletes have been added to the GB and NI teams for the Great Edinburgh XC – with a first call-up for Euan Gillham and a return to international action for Rosie Smith.

The event at Holyrood Park in the capital on Saturday offers something for everyone with mass participation races, Scottish Inter-District races featuring teams from the East, West , North and Scottish Unis (in the Senior races), and International Races that include world stars.

Scotland was already well-represented in GB and NI and with four more athletes to compete for Scotland in a 2 x 1k XC Relay event and Chris O’Hare in the 4k International race there is plenty of local elite talent on display.

Unfortunately, Euro U23 champion Rhona Auckland has been forced to withdraw with a slight Achilles injury and a viral complaint.

But, with Kilbarchan teenager Gillham added to the Junior Men and the experienced Smith (Hunters Bog Trotters) joining the Senior Women’s team, there are now six Scots who will pull on British vests.

Callum Hawkins, Andrew Butchart and Luke Caldwell are all in the 12-strong Senior Men’s team for the 8k race with Inverclyde’s, like that trio, retaining his place following the Euro Cross in Bulgaria in mid-December.

Other team changes, including the withdrawal of Mo Farah, are covered in the announcement on the British Athletics website.

In particular, Gillham’s call-up for the Junior Men’s race is another boost for the endurance community in Scotland following his 12th place finish in the Euro trial at Liverpool.

Coached by Robert Hawkins, Euan won the West District U20 title at Linwood as rival Glen prepared for his trip to Samokov – but now the duo are GB team-mates in the six-strong Junior Men selection. Gillham is not 18 until later this year and is thus young in the age-group. 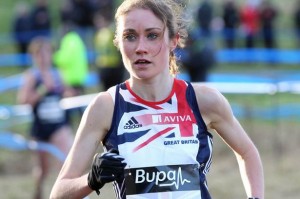 Smith, a regular medallist at the National XC at Falkirk over the years, has been involved with GB teams in the past and benefited from a shake-up in the Senior Women’s team as four athletes originally selected had to call off. Rosie finished 14th in the trial race at Liverpool at the end of November.

Auckland said: ‘I have a bit of a virus and an Achilles niggle. The two combined is not ideal and it is a massive disappointment. It was a hard decision because I was really looking forward to racing cross country again in a strong team on home turf.’

The Great Edinburgh XCountry is free to spectate and will be shown live on BBC One from 1pm to 2.35pm. It is part of a New Year festival of running for all abilities.

Around 3000 people will be starting the New Year on the right foot when they take on the popular Great Winter Run, held on a scenic 5k course that loops around Arthur’s Seat, before watching the world’s best test themselves in the international cross country races.

Timetable for Saturday’s races is on our Events page.

GB and NI team for the Great Edinburgh Cross Country on Saturday 10 January 2015: