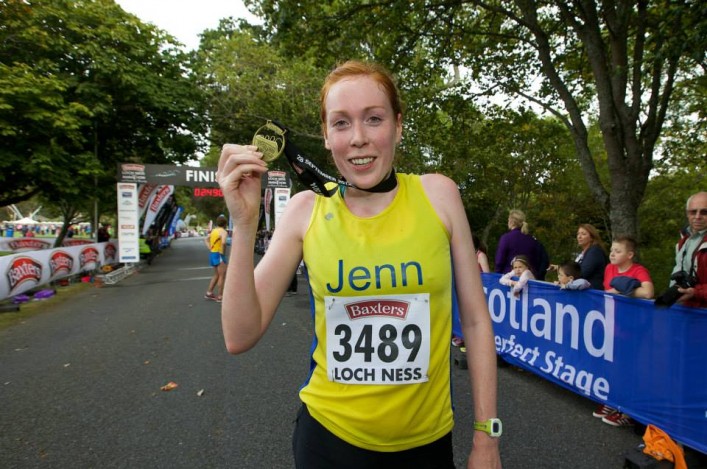 Manchester-based Tomas Abyu returned from a lengthy spell of training in Ethiopai to claim his fourth Loch Ness Marathon title in fine style.

The African athlete looked composed throughout the 26.2 mile race which started on the high ground between Fort Augustus and Foyers and followed a route along the south shores of Loch Ness before finishing at the Bught Park in Inverness.

‘I’ve been training in Ethiopia for a long time and I only returned last week when I decided to do the race,’ said Thomas.

‘I felt quite easy for the first 16 miles, then it got tougher, but I had been able to pull away from the others before halfway so I just kept it going.

‘I like running here. The countryside is very nice and it’s a good course. I certainly want to come back again next year to defend my title. In the meantime I hope to recover quickly so I can do the Yorkshire marathon in a couple of weeks from now.’

Edinburgh-based Polish athlete Patryk Gierjatowicz (Hunters Bog Trotters) collected the Scottish title for the second year in a row when finishing in the runner-up position in a personal best 2.24.17, while last year’s Loch Ness champion Tarus Elly (Salford) was third in 2.25.37.

With neither Abyu nor Elly being eligible for Scottish medals, the national silver went to Kerry Liam-Wilson (Ron Hill Cambuslang Harriers), who was fourth overall in 2.28.58 and the bronze was collected by John Sharp (Inverclyde AC) who was fifth in 2.32.00. Wilson also won the over-40 age group title.

There was a dramatic finish to the women’s race in which Jen Emsley (Central AC) held off a late challenge from title-holder Megan Crawford (Fife C) to take the top prize in a new course record time of 2.46.10, knocking 27 seconds off the previous standard.

Crawford was also inside the old record, which she set twelve months earlier, when finishing just 15 seconds behind, while Shona McIntosh took the bronze in 2.53.15.

Emsley was delighted with her day’s work which in addition to the record  yielded a Scottish title, a personal best time and a winner’s cheque for £1,500.

She said: ‘I am very happy but surprised to have run a quicker time than I did at the London marathon, as I think Loch Ness is a harder course.

‘But my training had been going well and I feel I’ve finally justified the hard work I’ve been doing.”

‘There were four of us for the first 10 miles then the Romanian runner, Alina Nituleasa, dropped back. Megan then seemed to drop back and I eventually pulled away from Shona. Then, near the end, I could see that Megan was beginning to close up on me again so it was just a case of keeping going and not getting caught.’

Crawford had mixed feelings about her performance which was admirable given that she suffered from stomach problems throughout the race.

She said: ‘I’m a bit annoyed but at the same time I’m really happy for Jen. I had to stop so many times during the race because of my dodgy tummy and every time I got going I was trying to make up ground. I eventually got past Shona and then began to close on Jen. I am convinced that if there was another mile I might have caught her.’

Terry Forrest (Cairngorm Runners) won the HSPC Gerald Cooper Memorial Cup, presented to the first Highland runner, for the third year in a row when he completed the course in 2.39.13. This was an impressive performance given that he started at the very back of the field.

Erica Christie (Bellahouston Harriers), who has competed in all 13 Baxters Loch Ness marathons, maintained her fine record of consistency by winning the over-50 women’s title in 3.14.20.

In the team competitions, for the Scottish Championships medals, there were victories for Bellahouston Road Runners among the men and Carnegie Harriers for the women. 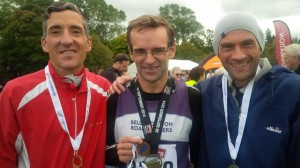 Andy Douglas (North Highland Harriers) won the Baxters Rivers Ness 10k for the second time in three years when powering through the finishing line in 30.10.

The Great Britain mountain running international always looked to be in control before making his decisive move just after the halfway point.

He finished 36 seconds ahead of Scotland road running international Neil Renault (Edinburgh AC) while the 2013 winner, John Newsom (Inverness Harriers), had to settle for third position in 31.11, with the 2011 champion Kyle Greig (Forres Harriers) taking fourth spot in 31.26.

Douglas said: ‘There was a good bunch of us together in the early stages but I was eventually able to pull clear. I got away from Neil around the 6Km point and just battled my way to the finish from that stage onwards.

‘I wanted to get a time around the 30 minute mark, so I’m happy enough with the result. It’s a great way to end the season. I’ll now take a short break then begin building up for the cross country campaign.’

Renault was also satisfied with the outcome, saying:  ‘My aim was to try to stay with Andy but I couldn’t do that and for the last few kilometres I was on my own. I could see him in the distance so I kept pushing on. I’m happy with the time as I haven’t really eased up for the race.’

Jenny Bannerman came close to her personal best time when leading Inverness Harriers to a clean sweep of the top prizes in the women’s division of the race. The North 10Km series champion recorded 35.52, which is just 15 seconds short of her quickest time recorded at the Scottish championships at Stirling recently.

Bannerman said: ‘I am happy with the win and my time as that’s twice I’ve been under  36 minutess now. I think my Stirling run was still in my legs because although I started off feeling fine, I was hanging on for dear life over the final four kilometres and the wheels were certainly coming off at eight kilometres.

‘It was great that Inverness runners filled the top three places but it’s a shame there wasn’t a team prize.’

North of Scotland schools 1500m track champion Liam Barnsby (East Sutherland Running Club) held off a strong challenge from the Inverness Harriers duo of James Geddes and Cameron Young to win the Baxters River Ness 5Km.  Barnsby,16, took top spot in 17.19 while Geddes, 16, was runner-up in 17.26, one sec ahead of his clubmate Cameron Young,16.