Eilish claims Scottish Record and Laura is fifth in Doha 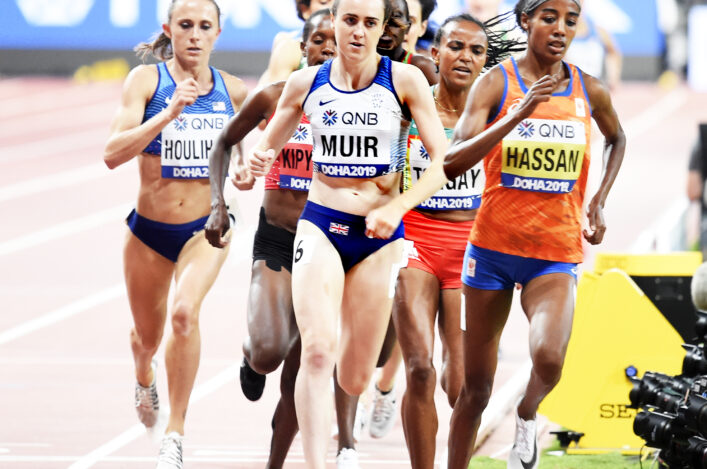 Eilish McColgan set a new Scottish Women’s 5000m Record at the IAAF World Champs – as Laura Muir went close to her own British Record for fifth in the 1500m.

It was a Saturday night of real drama on the track in Doha with the two Scots from Dundee Hawkhill Harriers in action.

Laura featured in a quite astonishing 1500m final which was won in a Championship Record from Sifan Hassan as the Dutch athlete added to her 10,000m gold.

‘I was fifth!,’ said Laura, with Faith Kipyegon taking the silver and Gudaf Tsegay the bronze.

‘I’m actually really, really happy, I know it’s not a medal which is what I would have wanted but to run 3:55… and to be fifth – well that’s unheard of! I am proud of myself to run that sort of time off the training that I have done.

‘I never thought I was in that sort of shape. So yes to do that off that training gives me confidence to know that when 100%… well how fast can I go?

Laura Muir happy with her 3:55.76 for 5th in the red-hot world 1500m final in Doha after an injury-hit build-up. #WorldAthleticsChamps pic.twitter.com/vwHO95Y6kY

‘I have had Jo Pavey’s time of 14:39.9 in the back of my mind and I knew from training that I was in great shape but it is not easy going out and setting the pace for everyone.

‘I knew that I wanted a quick race and in order for me to run a PB I was going to have to take it on. Obviously it is a little daunting going to the front at a world champs because you are just a sitting duck, waiting for Obiri and that to come past.

‘I am a little disappointed because I feel there is more there and I am in much better shape than when I ran 47s, so to just run 46, I am like ‘urgh’ but it is still a PB and a Scottish record, my own record, but a little bit frustrating. I would have liked to have pushed into that top eight.’

Eilish McColgan chats to @Jason_AW about her Scottish record for 5000m and why she wanted more. #WorldAthleticsChamps pic.twitter.com/heDgIwt7rj

Gave it my best shot tonight, but fell a little short of the time I wanted! ? Personal best, Scottish Record and 4th on the UK all time lists behind a PB run from Laura W – so it's far from doom and gloom! By far my most consistent year, but I'm so hungry for more! ? #changes pic.twitter.com/3aWaukSc8m

Zoey Clark was on the first leg to help GB and NI Women into the final of the Women’s 4x400m relay.

‘In the heats the aim is always to qualify and we always wait until the start lists come out so we know how much of a difficult task we have,’ said Zoey.

‘We always say we want to put our best team forward but we also want to save some for the final. It just about having the team we believe can qualify in those automatic positions.’