Eilish McColgan showed her continuing form at the Brussels Diamond League meet on Friday with a 5000m run of 14:31.26. It was a performance that slots in at third place on the British all-time list, bettered only by her own British Record, and the previous record held by Paula Radcliffe.

Eilish marked the end of her track season by announcing that she will make her half marathon debut at the Great North Run on Sunday – definitely one to watch!

What a night!! Having 20,000 fans inside this stadium was incredible. 🤩

Super happy with a 14.31. The 3rd fastest time in British history and only 3s off my British record.

Jemma Reekie had a hectic weekend – at the same Diamond League in Brussels she took 3rd place in the 800m in 1:58.77 and then travelled to the Silesia Kamila Skolimowska Memorial meet in Poland, to win the 1000m in 2:35.47 on Sunday.

The UK School Games (pictured top) was held at Loughborourgh University over the weekend, with 35 Scottish athletes making the trip. Organisation was slightly different this year with criteria set before selection, and athletes arranged into teams named after Olympic host cities, with Scotland providing management team for two of the teams.

There was a particularly strong performance in the Triple Jump, where Scottish athletes filled 1st, 3rd and 4th places (Holly Kirkwood in 4th). That 3000m gold for Louisa of Garscube Harriers was also impressive, securing the win by 20 seconds in a new PB of 9:30.89 and a new School Games record.

There were, in addition, a number of excellent PBs across many events – congratulations to all the athletes taking part and gaining valuable competition experience. They were, as a group, praised for their commitment & team spirit, supporting other Scots as well as their team.

With thanks to Margaret McInally and Leslie Roy 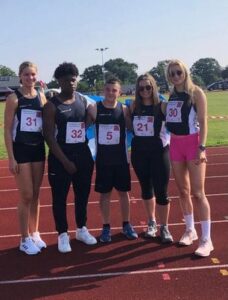 Our young throwers stepped up and smashed their personal bests at this weekend’s England Athletics Throws Fest in Northampton in fantastic conditions as they challenged themselves against some of the UK’s best Under 18 athletes.

Stand out performance came from Cumbernauld’s Amy Kennedy who dropped down to the 3kg implement to smash her personal best with a massive 15.13m and win a silver medal behind England’s Omolola Kuponiyi. Paige Stevens achieved yet another shot PB of 14.22m for 5th with Meghan Porterfield in 6th with a best effort of 13.96m.

Segae Ugbe also achieved a big personal best of 16.30m (16.45m in qualifying) for 4th in the boy’s shot event in an extremely high-quality competition, a position matched by Callum Hendry in the hammer with 51.72m which is another throw over the 50m mark for Callum.

A particularly busy weekend for Meghan, Callum and Paige, who managed to compete at both the UK School Games and the Throws Fest.

Livingston AC Open Meet saw plenty of athletes giving it their all on Friday evening.

Of particular note was Erin Wallace running a significant 1500m PB of 4:07.46. It’s a great sign of progress from the Giffnock North athlete, who has already had a superb summer with 1500m bronze at the European U23 Champs in Tallinn.