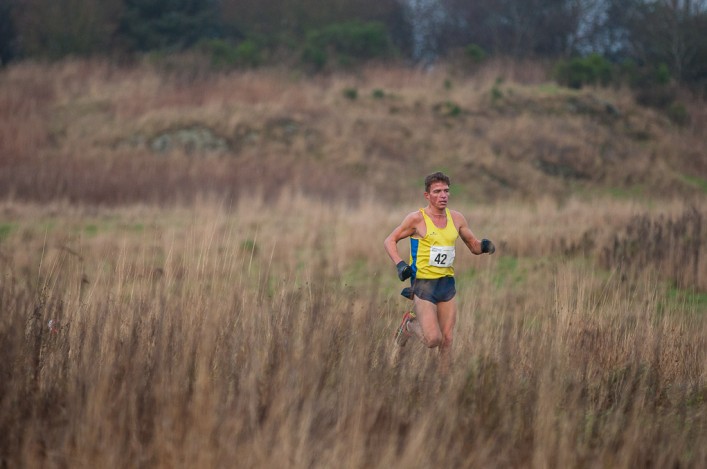 Andrew Butchart claimed the East District title with an impressive win over the varied 9.6K course at Dechmont, Livingston.

The Central AC athlete would understandably have preferred to have been elsewhere – with Team GB at the Euro Cross in the south of France, in fact – but he remains hopeful of international selection for the Great Edinburgh XC at Holyrood on January 9.

Many others who performed well at Livingston will certainly be involved that day with East Districts vests on offer for the Inter-Districts as well as Scotland teams to be picked for the Celtic Nations XC, which takes place within that fixture at U17, U20 and U23 level.

Hunters Bog Trotters had an individual champion in the person of Rachel Haines, as she took the Senior Women’s race from Freya Ross, with the U20 golds headed for Euan Gillham, in the colours of Edinburgh Uni Hares and Hounds, and Fife AC’s Steph Pennycook.

Butchart was the clear winner with a good battle for the silver as his Central AC team-mate, Alex Hendry, ultimately saw off the challenge of Max McNeill, from host club Lothian Running Club in an exciting finish.

‘I guess there are regrets I’m not at the Euro Cross but I had to finish higher up in the trial for that to happen,’ said Scottish champion Butchart.

‘Looking back now I know I should not have run after being ill for a few days the week prior to the race in Liverpool. But I am still hoping I can be involved with GB for the Great Edinburgh XC at Holyrood Park – it would be great to come back for that.

‘I wanted to race here for the club and because I knew it was a good course. I’m pleased with the run and we did well as a team again with Central athletes at 1,2 and 5 as Alex and Ross Houston backed me up.’

Butchart clocked 30.37 for the 9.6K course and won it by  42 seconds from Hendry. McNeill was only one second further back.

With Central recording their 12th win in 13 years in the team race, Corstorphine AAC had to settle for silvers with Ben Stevenson’s fourth place helping push Falkirk Victoria Harriers to the team bronzes. 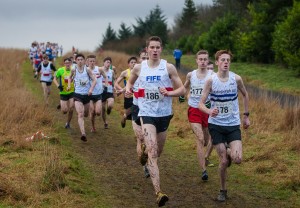 Edinburgh AC won the Women’s team title and Angela Richardson’s fine run for third place was a significant factor in Fife AC taking silvers, with HBT not far adrift in third in the overall points.

Haines held off the challenge of Ross throughout their lengthy battle for supremacy with the outcome not decided until the final downhill stretch.

Pennycook of Fife AC and Gillham of Edinburgh Uni Hares and Hounds took the U20 golds – with GB international and Kilbarchan AAC athlete Gillham proving a formidable force as he switched from West to East due to his student status.

Sol Sweeney won the U17 Men’s title to follow-up his recent good run in Liverpool with the U17 Women’s gold headed for Kate Gallagher of Central AC.

There were other golds in the lower age groups for Anna Hedley of Fife AC and David Addison of Corstorphine AAC at U13 and for Lewis Pentecost of Falkirk Vics and Eloise Walker of Edinburgh AC at U15. Team medal details are within the Results.

Good to see Moorfoot Runners among the team golds (at U15 girls) and, in the Senior races, big turnouts from many clubs including the likes of Metro Aberdeen as well as some of our more familiar East club names. Notice, also, that Falkland Trail Runners were represented after recently being affiliated to scottishathletics.

Many thanks, as always, to the sterling efforts of the volunteers who helped out on they day and in particular to host club Lothian Running Club for their hard work with this latest event in the Lindsays Cross Country Season. 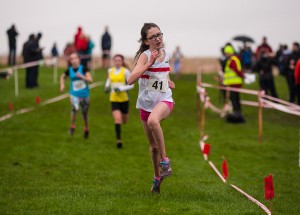 With many thanks to Steve Adam for photographs – more on Facebook 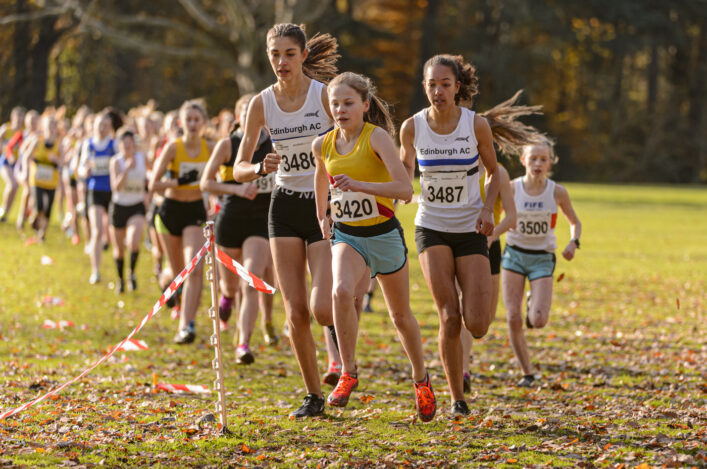