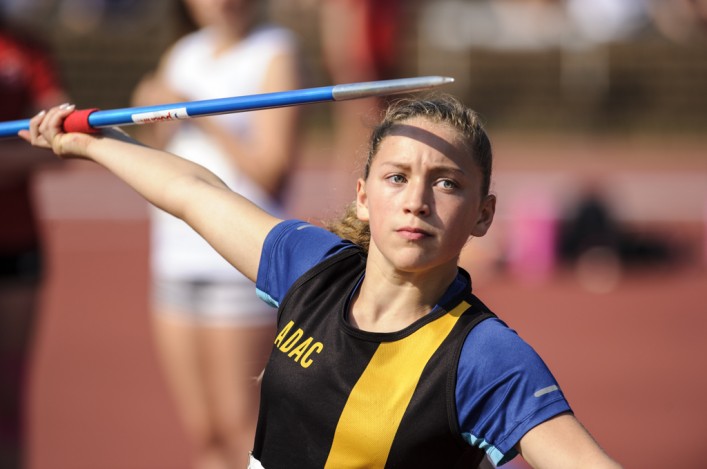 Just a few years ago the stated twin goals of scottishathletics were to try and increase participation and improve performance levels in the sport.

Seldom can the two have married quite as they did over the weekend – with large numbers at our Age Group Champs and a string of exciting results coming through from Beijing, around Britain and indeed at Grangemouth where there were a number of championship bests over the two days.

On Sunday, the U15s and U20s picked up the baton from the day before at the Age Group Champs with the remarkable response from clubs the length and breadth of Scotland very obvious around the stadium.

As an aside: wasn’t it good to see so many of our U20 athletes wearing GB kit following appearances at the World Youths in Colombia or the Euro U20s this summer? There can be few better ways for our teenage role models to inspire and motivate other young Scots.

We’ve stood accused a little bit in the past couple of weeks of putting a big focus on the large number of entries; of branding it as ‘legacy’; and of over-emphasising growth in the sport.

Yet the ‘pitch’ has been deliberate.

First and foremost, scottishathletics wanted to create and stimulate a feel-good factor around the Age Group Champs. We wanted it to be inclusive; we want young athletes to want to be part of their National Championships and have a desire to compete against friends and rivals. One of our slogans has been: ‘Competition – it’s what you train for’.

As it stands, there’s no barrier to any youngster competing in the National Champs and, while issues such as entry standards are being discussed, that remains the status quo.

Be in no doubt: we want clubs with large numbers of youngsters training on a weekly basis to be galvanised – where it is appropriate – into competing because that should help improve standards overall. 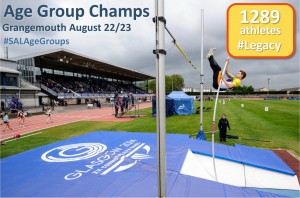 Secondly, if we can create bigger events with larger numbers and more interest from within the sport then we can perhaps attention beyond our own ‘family circle’ from the public, the media, potential sponsors and so on.

To that end it was great to read a Herald column by journalist (former badminton international) Susan Egelstaff.

Susan wrote: ‘This weekend’s Age Group Champs will see more than double the number involved in 2011. While it would be erroneous to attribute this rise wholly to the Olympics in 2012 and the Commonwealth Games, it would equally be folly to suggest these events had no impact whatsoever. Children all across Scotland watched the olympcis and Glasgow 2014 and decided what they wanted to do that, too.

‘Had these events not been on British soil, it is unlikely that the increase would have been quite so marked and while there is automatic guarantee of producing another Eilidh Child or Lynsey Sharp just because more youngsters are competing, it is makes it a lot more probable.’

Big numbers bring big challenges, however. To the timetable, to officials, to the staff of scottishathletics and indeed Grangemouth.

We are seeking to meet those challenges head-on and, without yet being able to add detail, having all four age groups competing over two days may well be regarded as too big in future. As always, we’ve deeply indebted to volunteer help when staging events.

The scottishathletics board discussed these issues on Sunday morning with key members of the Track and Field Commission and there are decisions to be made. Watch this space. 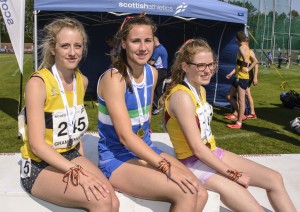 There were plenty of story-lines among the U20 Champs.

Jack Lawrie won the Senior title at 400m hurdles last week and followed that up with the U20 version here, as well as the sprint hurdles crown and a silver in the 400m – losing out only to a GB international from Guernsey, Cameron Chalmers.

Mhairi Hendry likewise won the Seniors 800m in Aberdeen and added the U20 title here.

Cameron Tindle missed out on the Seniors because of a Team Scotland gathering ahead of the Commonwealth Youth Games. But he made up for it by edging out Ross Maxwell in the 100m final to win in 10.79 on a day when the wind proved troublesome in many events. Cameron made it a double with 200m success; with Jenna Wrisberg completing a women’s sprint double.

Long jumps were therefore windy as Rachel Alexander leapt to 6.04m with her best effort since Loughborough and the ideal warm-up for Samoa with Scotland.

Ben Greenwood added an U20 silver at 1500m to his U17 gold the previous day. For Kilbarchan, the U20 1500m races provided a fine double as Gavin McArdle retained his title after Sarah Dempsey had won the Women’s race with a PB. 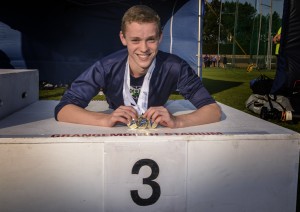 Orkney’s Thora Cant won the javelin, with Shetland having a National champion at U15 level via Leigh Nicolson.

Pick of the U15 performances was that of Arbroath’s Joel McFarlane (and not for the first time). Joel won three golds in all in the 80m hurdles, javelin and long jump with the latter a 6.50m windy performance that is a championship best.

Central AC’s Emma Mailer was another CBP with 41.95 in the 300m. In the U15 boys 800m, there was a cracking finish as Aberdeen AAC’s Harry Hall edged out his club-mate Jack Gillespie for the gold. 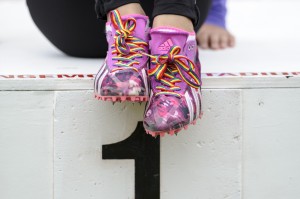 *Thanks! We had great support for our Rainbow Laces campaign with Stonewall Scotland over the weekend, giving away pairs of the laces to put across the message that there’s no room for homophobia in athletics.

We’ve given away 2,000 pairs of laces over the weekend and received some great entries in our Twitter photo competition to win vests and Glasgow 2014 race numbers autographed by Eilidh Child – we’ll announce the winners later in the week.