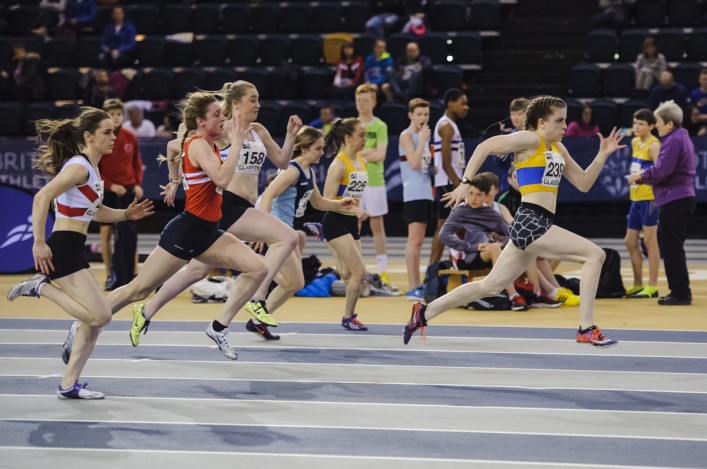 Young sprinter Jenna Wrisberg is the latest Scottish U20 record-holder following a superb 60m run at the Age Group Champs.

The Giffnock North AAC athlete successfully defended her title with a run of 7.50 seconds at the Emirates Arean – and that was inside the previous best 7.52 held by Gosia Rostek.

It also moved Jenna, whose PB had been 7.65, up to No 8 in the Scottish all-time lists and added the U20 title to the Senior and Scottish Schools golds she won earlier in the indoor season at the Emirates.

Ben Greenwood smashed a Chris O’Hare Championship Best in the Age Group Champs  – then thanked announcer Jim Goldie and the Emirates Arena crowd for helping to spur him on.

It was one of a number of good performances over a hectic weekend of action at U20, U15 and U13 level that saw a handful of championship bests recorded as well as numerous PBs.

Indeed, it was exciting to read on the Scotstats.net website report there were 38 additions on the all-time list top 10s for U20, U15 and U13 over the weekend. That’s the Class of 2016 stepping up to the mark and making a favourable impression.

The level of commitment to these events by Scotland’s clubs is not in dispute, of course, and that was exemplified boy a ‘four nights, three days’ trip for a party of 16 from North Uist AAC.

As we thank, once again, the dedicated ‘purple army’ of scottishathletics officials for a big shift over two days we were indebted also to GB international Josephine Moultrie for helping with medal presentations on Sunday – as the next generation seek to follow in her footsteps as she now prepares for the World Indoors. 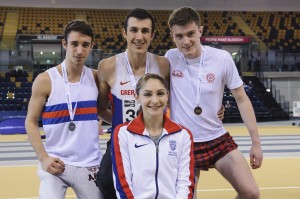 ‘We looked at the Championship Best on Thursday night when checking the entry list and thought about trying to have a go at it,’ said Greenwood.

‘I had done some 300 reps on Tuesday that were quick but also comfortable so my coach, Kat Tavendale, said ‘why not aim for sub-four minutes and see how close you can go’.

‘It was hard because I do tend to lose concentration a bit in the 1500m and particularly indoors where you have seven and a half laps. But the announcer (Jim Goldie) was really on the case in terms of the time and that got the crowd involved.

‘I could hear him saying what the lap times were and that I was still in touch and it definitely help spur me on. I’m pleased with the time and of course someone like Chris O’Hare has made a great leap from Junior athlete to successful Senior so you are always pleased to take one of his records.’

In the U15s, there were three Scottish records.

Edinburgh’s Max Leslie won the 300 metres in 38.40, bettering his own under-15 record which is awaiting ratification, and Allan Scott‘s under-15 triple jump record of 12.16 was beaten by Glasgow School of Sport’s Miraji Ahmed with a jump of 12.35.

And there was a triple jump record for Ellie O’Hara (Edinburgh AC) at 10.76m. 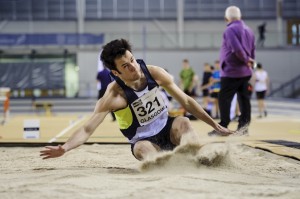 The Saturday action saw two of our National Academy members claim Championships bests at U20 level – with the competition just as intense at U13.

Pitreavie AAC’s Ben McGuire and Kelsey Stewart of Aberdeen AAC were the two athletes who headed home after delivering CBPs at the Emirate Arena on a good day for the sport’s development in Scotland.

Long jumper Ben reached 7.10m to take gold in his event while Kelsey has recently moved up from 400m to 800m and clocked 2.10.92 to better the previous U20 Women’s best for four laps indoors, held by Mhairi Hendry.

Other Scottish gold medallists were Tom Chandler and Katie Patullo in the 60m hurdles; Dylan Thomson in the pole vault; Megan Busby in the long jump and Aidan Gilbride in the 800m.

There was a 400m win for Lewis Brown, while the new 200m champions at U20 are Fraser Angus and Alisha Rees. The  24.22 by Rees was only six hundredths off the championship best for that event.

*And Edinburgh’s Katie Johnson broke the U13 1500 record with her 4:58.60, although finishing second in the race to an Irish athlete.