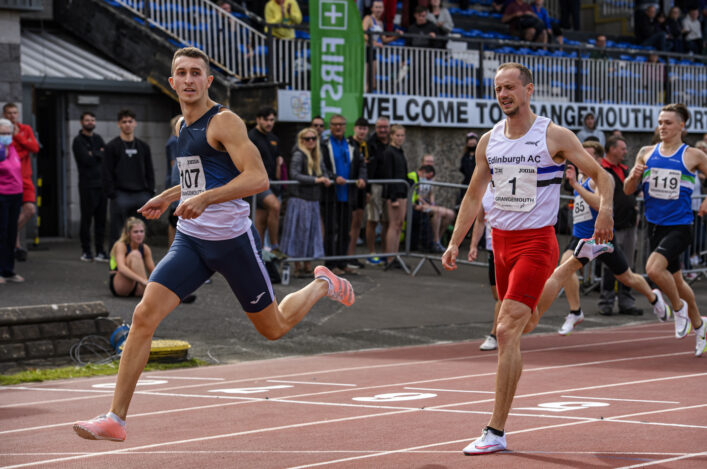 David Smith and Nick Percy rose to the challenge laid down by Kirsty Law at the 4J Studios Senior/U17 Champs on Sunday – to land gold medals and a slice of our £2000 prize pot.

For the first time since our ‘bounty’ was introduced, there was a three-way split with Law, the sole contender overnight, left simply to applaud decent performances by high jumper Smith and fellow discus thrower Percy.

In fact, long jumper Alessandro Schenini produced one of the best performances of the weekend to leap to a big PB of 7.76m – albeit that left him 4cm short of a share of the prize pot.

On the track, Sarah Calvert’s 1500m victory was further adorned by a big PB and there were solid title wins for the likes of Ben Potrykus, Ben Greenwood, Jamie Crowe, Sarah Tait and Greg Kelly.

The Women’s 200m was won by Orkney athlete Taylah Spence – and it is understood that may very well be the first Scottish Senior gold to head across the water back to Orkney.

Perennial discus champ Law, watching Sunday’s proceedings on Vinco from afar, was still hanging on the full £2000 pot until mid-afternoon.

Percy, though, had always looked a good bet to throw beyond 59m and duly did so with 59.47m. Within a few minutes, Smith was lining up a first attempt at 2.23m – above the 2.22m required – and sailed clear to a huge cheer around Grangemouth.

David had first time clearances throughout prior to trying what would have been a new PB at 2.27m. It was good to see Lewis McGuire clear 2.17m to take silver with a PB.

‘I’ve only really been getting my fitness back and training better after injury in the past four weeks,’ said David.

‘I feel the Scottish Champs really should mean something and it does to me. As you are growing up it is a big target and I’ve always liked jumping at Grangemouth – they put the Hampden track down here after Glasgow 2014 and you can feel it is a good surface.’

Percy for his part wasn’t too satisfied with his winning throw of 59.   .

‘I’ve had an angry message from Kirsty,’ he laughed.

‘I’ve been averaging about 61.50m this season so should have been a bit better here. But I will take the win and the money is really helpful at the moment because I am on a trip training and competing and the costs mount up.’

Schenini conversely didn’t have the cash lift but the PB was a huge boost.

‘I am delighted to win gold and get a big PB as my season comes to an end,’ said Alessandro

‘I missed out on the Euro U23 selection qualifying tough at 7.70 and I was not quite there after Covid training issues and so on.

‘But working with my coach Ryan McAllister we did the Jumps GP events and those were very helpful in terms of competition opportunities.

‘Now I will look to get into some good training through the winter and hopefully there is a big year ahead in 2022 and I can make the Commonwealth Games standard (7.85) and then the team.’ 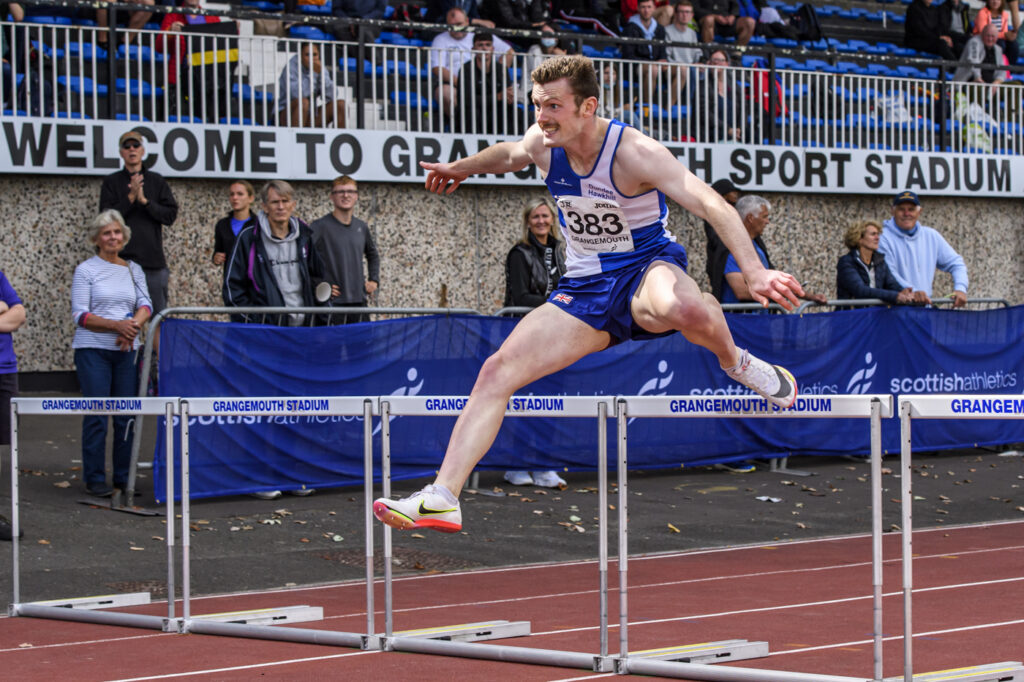 The men’s 5000m delivered significant quality and it unfolded as a Central 1-2-3 with Jamie Crowe coming home in 14:19.88 to add a track title to cross country.

Ben Greenwood won the 800m title in 1.49.08 from Kane Elliott, his first outdoor Senior success. Olivia Vareille took the Women’s 800m crown in 2.09.65 on a weekend when Falkirk athletes performed well on their home track.

In the 1500m finals, Livingston’s Sarah Calvert and Ben Potrykus of Inverclyde AC emerged with gold with fine performances.

Both races were great to watch with the three women’s medallists under 4.20. Sarah took about five seconds off her PB to win in 4.14.19 with Kathryn Gillespie second and Megan Keith also posting a PB of 4.19.

Potrykus was favourite in the men’s race and justified that status as he pulled clear on the last lap. Behind him the medals were keenly contested with Ben Macmillan of Central coming through for silver as Cambuslang’s Jamie Mackinnon took bronze.

And the 400m hurdles saw title wins for Declan Gall of Dundee Hawkhill and Emily Craig of Edinburgh AC. Gall saw off the challenge of Connor Henderson in 52.69 while Craig took gold in 61.10. 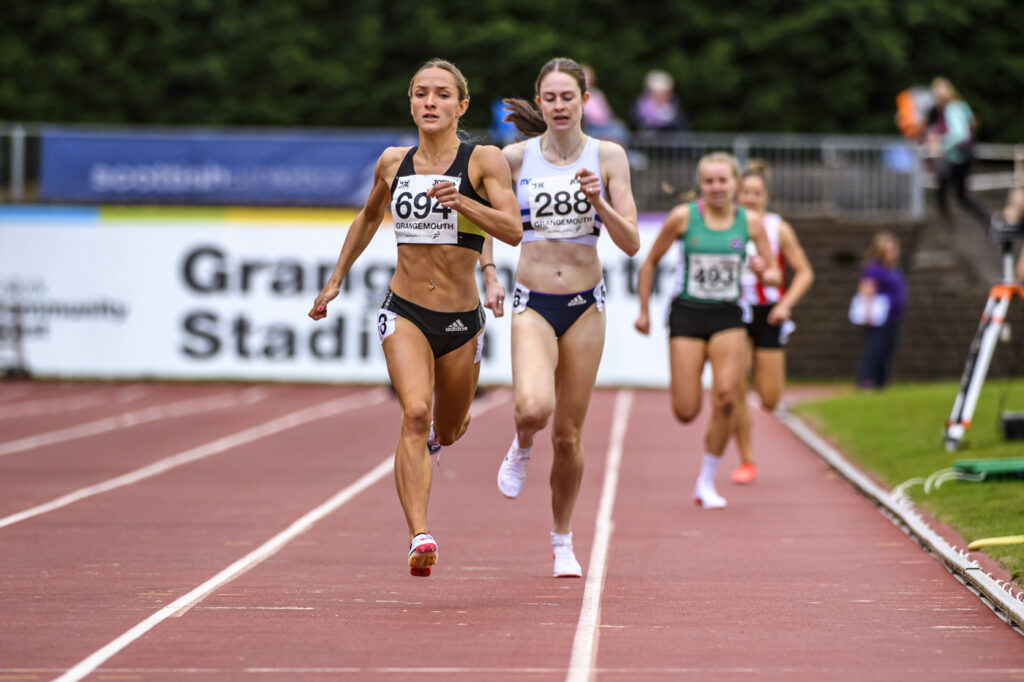 Craig Charlton was seeking to defend the shot putt title he had won I 2019. And the Scotland international from Morpeth Harriers did exactly that with a throw of 15.94m , more than a metre beyond his 2019 winning distance.

The winner needed no introduction, either, with Sarah Warnock’s loyalty to these champs again rewarded with gold at 6.05, again an improvement on her 2019 performance.

The Women’s pole vault title was won at 3.30m by Sara Barbour of Kilmarnock Harriers.

Andrew Murphy had won the pole vault on Saturday and he added the 110m Hurdles gold on Sunday after getting clear of Kilbarchan team-mate Howard Bell in the latter stages of the race.

Sarah Tait was fifth in the Euro U23 champs in the 3000m steeplechase and took the senior title in 10.40.61. Sarah thus went from the commentary box to the podium after undertaking a day working for Vinco on Saturday.

The Women’s Hammer was delayed by a cage issue but, eventually, Rachel Hunter took the honours with 63.19m. We must thank and acknowledge the patience of our Women’s Hammer competitors. 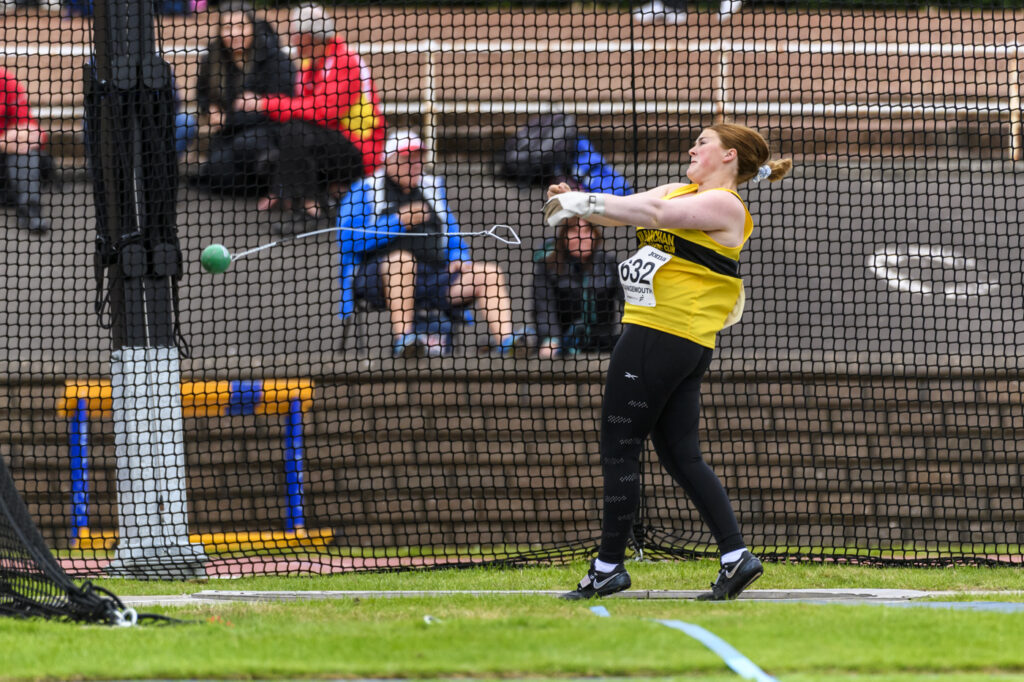 In the U17 Champs, our first gold medallist of the day was in the Women’s long jump. Edinburgh AC athlete Molly Reville took the title with 5.72m ahead of a Scotland U20 appearance in Manchester this week.

Kilbarchan AAC thrower Dawn Russell won the Women’s Hammer event with 50.31. Meghan Porterfield added silver there to two golds the previous day. Russell for her part was also a double gold medallist as she added the javelin title with 41.85.

In the throws, Shettleston picked up another medal via the 13.56m effort of Jay McCarthy to win the shot. The U17 men’s long jump title was won by Falkirk athlete Samuel Kane with 7.10m.

Cumbernauld athlete Calum Mackenzie won the men’s 400m in 50.48. May MacDonald of Blaydon Harriers won the Women’s 80m hurdles in 11.71.

Katie Johnson has a GB appearance at U18 level coming up this midweek – and she warmed up with a medal double at Grangemouth.
The 800m is her favoured event and she cruised clear of the field to win gold there at around 3.40pm.

Less than an hour later she lined up in the 1500m final but this time had to settle for second as Garscube Harriers athlete, Louisa Brown, took the gold.

Giffnock’s Cameron Deverill took gold in the men’s 1500m final  as Aberdeen’s Kai Crawford won the 800m. In the 200m finals, there were golds for Dean Patterson of Glasgow School of Sport and Rebecca Grieve of Pitreavie AAC.

Flora Henry of Team East Lothian had won Women’s U20 gold on Saturday.

A series of Para events were also integrated into the day two programme at Grangemouth with track races as well as seated throws events in the field.

Gavin Drysdale won the Mixed RR 400m race with a Championship best of 74.06. There were wins for Ross Patterson and Melanie Nicoll in the mixed 200m ambulant race.