Jemma Reekie went within touching distance of the podium in her first Olympics – as she finished fourth by just nine hundredths of a second in the Women’s 800m.

The Scot ran a new PB of 1:56.90 and looked good for the podium until the last few metres as American Raevyn Rogers came through to finish in 1:56.81.

‘I definitely wanted a lot better than that,’ said Jemma.

‘The time was good but I know that I’m in even better shape than that, and it’s just frustrating when you don’t perform on the big stage because I’ve been flying in training and everything else, but I’ll learn from it and come back stronger. Paris isn’t too far away (2024 Olympics).

‘I didn’t quite get out as fast as I wanted to and into the position I wanted to, but that’s 800m racing, it’s always going to be really tough, and the girls have done so well out there today.

‘You can’t complain if you’re fourth in the Olympics, but you can because you’re just outside those medals.

‘I’m not going to be that happy about it, but there’s nothing I can do about it now and I can’t reverse time, I can just progress and get better for next year.’

Jemma gave it everything and put together three very strong performances in Japan via the heats, the semis and a PB in the final.

There was so much to be proud of and the athletics community in Scotland gave her huge backing across our social media channels in the immediate aftermath of the race.

Well done to Jemma, her family and coach Andy Young. 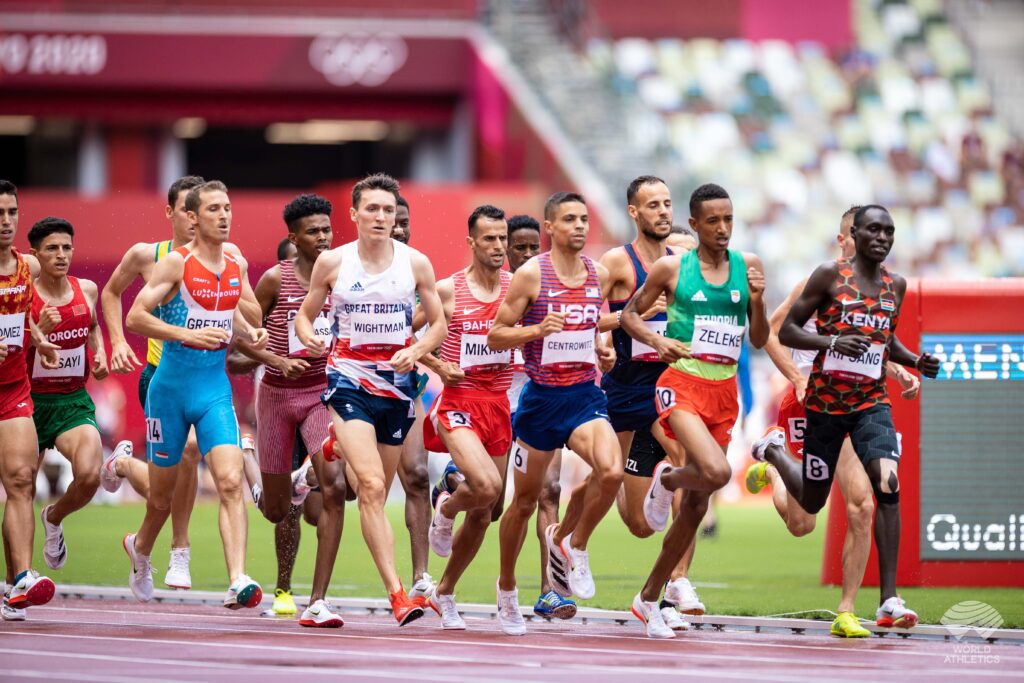 Laura Muir cruised into the next stage of the Women’s 1500m in the early hours of Monday (our time).

Laura took second place to former training partner, Canadian Gabi Debues-Stafford, in a run of 4:03 and insisted later the key had been to try and conserve energy for the semi-final.

The Men’s 1500m first round heats saw our Scottish duo progress to the semi-finals on Thursday.

Jake Wightman ran a smart race to avoid trouble and qualify in third place with 3:41.18 in heat two.

Josh Kerr had looked safe in the top six in heat one until the final metres of the race when edged into seventh place. But his 3:36.29 always looked a good bet to be one of the additional six qualifiers and so it proved after heat three.

It was good to see Welsh athlete Jake Heyward also join his GB and NI team-mates in the semi-finals.

‘I had a smooth enough ride, I think I got a spike wound, had few pushes but, there was the fall which I’m glad I didn’t even notice until the end,’ said Jake.

Andy Butchart came up with a very fine performance to reach the final of the Men’s 5000m at the Olympics for the second time in his career.

The Central AC athlete ran a very smart race to make sure he was always in touch with the leaders and with an eye on the overall pace.

And so a 7th place finish in 13:31.23, with the top five landing automatic progress plus the next five fastest, was more than enough with the second heat the quicker race.

GB and NI team-mate Marc Scott missed out after 6th place in his heat.

Beth Dobbin bowed out of her first Olympics at the semi-final stage after a fine run in the Women’s 200m heats.

The Scot clocked 22:78 in that first race to take second place with the top three guaranteed progress.

It was much tougher in the semi, of course, with a stacked field and nine athletes (rather than eight) on the start-line and Beth clocked 22:85 for fifth place.

We make it that Beth, who had come into the event ranked 20 in the world, finished 15th in the overall Women’s 200m semi-final picture.

‘I would have liked a bit quicker after my heat felt really controlled and comfortable,’ said Beth.

‘I did come off the bend and my legs felt quite heavy so I don’t know if it’s the two rounds in the day that I’m not quite used to, but it’s the same for everyone and I probably just don’t have the experience to get through that.

Beth could yet be involved in the Women’s 4x100m Relay with GB and NI.

‘I’m really looking forward to it. I’m obviously new to the team, and very inexperienced compared to the girls. This is just experience for me and learning, and if I get to run that’s great but if not it’s been a good learning experience.’

The Olympic experience turned tough to take for Nicole Yeargin moments after her run in the Women’s 400m heat.

Nicole had delivered a strong run to take third place in the race in a time of 52:04 – with only the top three assured of progress to the semi-finals.

However, the Pitreavie AAC athlete was subsequently disqualified for a lane infringement under track and field rules. TV images suggested Nicole twice caught the lane line with her foot shortly after coming out of the blocks.

It will have been a very sore experience for Nicole after running well but she remains with the Women’s 4x400m Relay team and may yet get another chance to compete at Tokyo 2020.