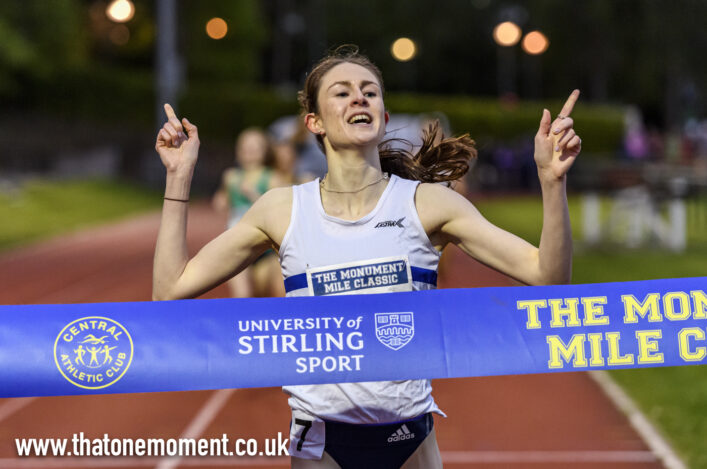 Hannah Cameron set aside the stress and strain of working in the NHS through the Covid crisis to deliver the most significant victory of her career at the Monument Mile Classic in Stirling.

And Ben Potrykus made it a Scottish double in terms of the elite race winners as he edged out Kane Elliott in an exciting elite men’s finale.

Like the Women’s winner, Potrykus felt it one his most meaningful wins on the track and he firmly credited organisers Central AC and Michael Wright for their substantial efforts to promote the Monument Mile, which is supported by GSS Developments.

Cameron had finished fourth last year – and outside the prize-money – on a September evening when English athletes went 1-2 in the both the main race podiums.

This time, the Edinburgh AC athlete picked up where she had left off in a recent 800m run and headed Edinburgh Uni Hare and Hounds athlete Rebecca Johnson to win in 4:46. 86.

‘I took the day off work to get ready for racing so I’m delighted to win the race and pick up the £250 first prize,’ said Hannah.

‘I was fourth last year and just missed out. I work as a physio in the NHS so it has been pretty stressful and full-on in the past year.

‘I got back on the track a couple of weeks ago at a BMC in Manchester and managed to win my 800m race in 2.07. It was inside the British Champs qualifying time so that was what I was looking for from that one.

‘Tonight I just hoped to try and build on that. I’m not really a mile/1500m type of runner, to be honest, so I’m really pleased with that and there’s the bonus of the 1500m split in there as well, so that will be another PB.’

Johnson finished in 4:49.85 and she was chased home closely by Edinburgh AC U17 athlete, Katie Johnson, who clocked 4:50.58 with a fine run. Olivia Vareille and Naomi Lang completed the top five positions. 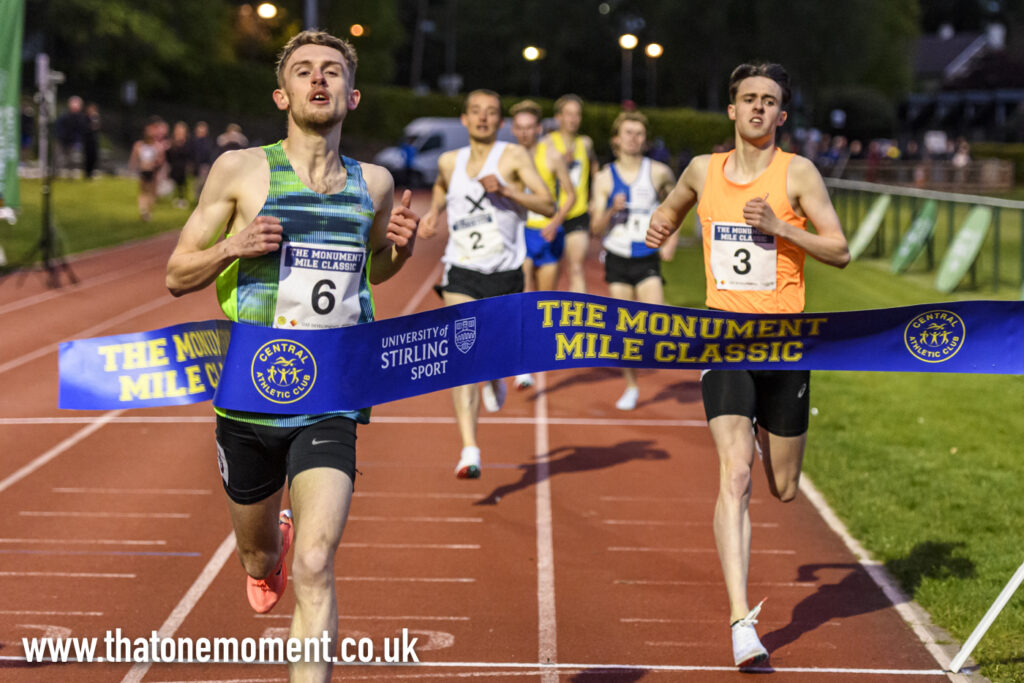 The strong winds of mid-meet had abated somewhat by the time the last of 27 races took place. But if the conditions were less than perfect then everything else just ‘felt right’ as club runners from the length and breadth descended on Stirling.

‘It’s not a BMC meet but it does feel like a meaningful race to win because the organisers put a lot of effort into it for the athletes,’ said Potrykus, who won in 4:03.57 from Elliott’s 4.04.02.

Josh Carr was third and the top five was completed by James Donald and Ben MacMillan. Central AC’s Alastair Marshall was the top U20, seventh in that elite race.

‘At the bell with 400m to go, I honestly thought I was going to be no better than third or fourth. At that stage I honestly didn’t think I’d anything left.

‘Then, somewhere down the back straight I began to close on those on front and believed again. I’m looking to get into the 1500m at the British Champs and this is another step in the right direction towards that.’

The depth and range of the event was emphasised by a British Masters Record for Fiona Matheson of Falkirk Victoria Harriers – with club-mate Elliott still an U20.

Matheson recently turned 60 and had sights set on a couple of time targets, despite significantly wind conditions for that 6pm race. Fiona duly clocked 5:41.65 to get inside the previous British Record and suggest that a World Record, which is at 5:39.85, could yet be within her reach.

‘I will need to try and find another mile race on the track somewhere this season and see if I can have another crack at that – but I’m very happy with my run and a British age group Record,’ she said.

The inclusive nature of the event was demonstrated further by a wheelchair race. Sean Frame won that one in 4:16.52 although Luke Deighan made it a real battle with less than a second between them in 4:17.52.

Conditions definitely mitigated against PB performances, but there were still races to savour – particularly a great battle between U17s Connor Bell of Central AC and Corey Campbell of Team East Lothian – 4:18.15 as against 4:18.69.

And Garscube’s U17 Louisa Brown showed true grit to go sub 5:00 in a race where she went off fast to build a big lead over two laps, was over-hauled by Constance Nankivell and, after being in danger of slipping to third, fought back in the final 100m to win. Terrific. 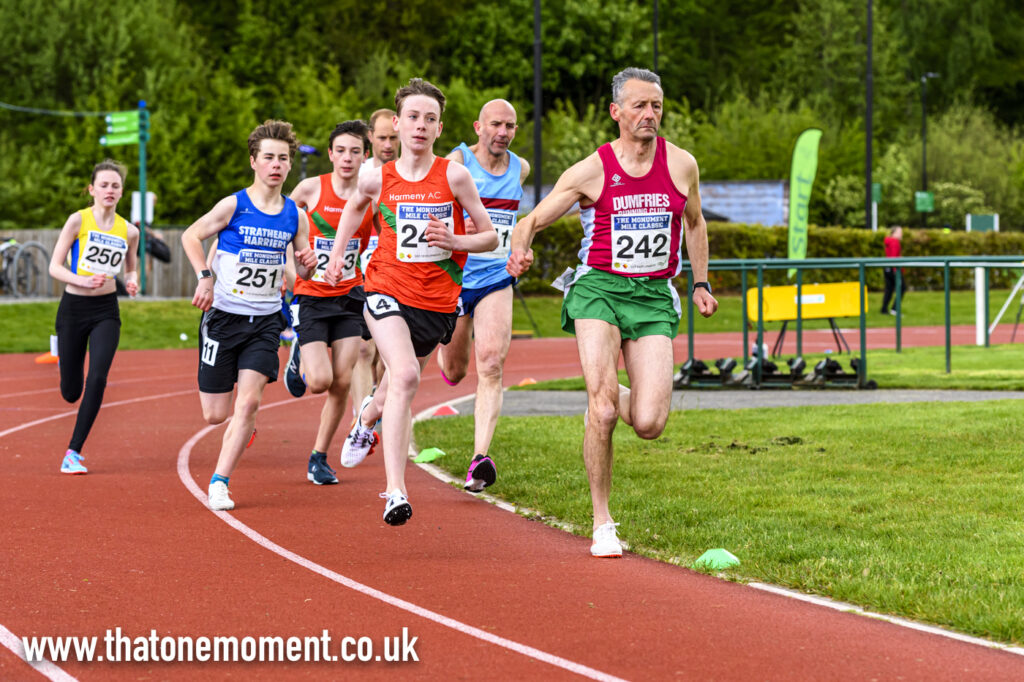 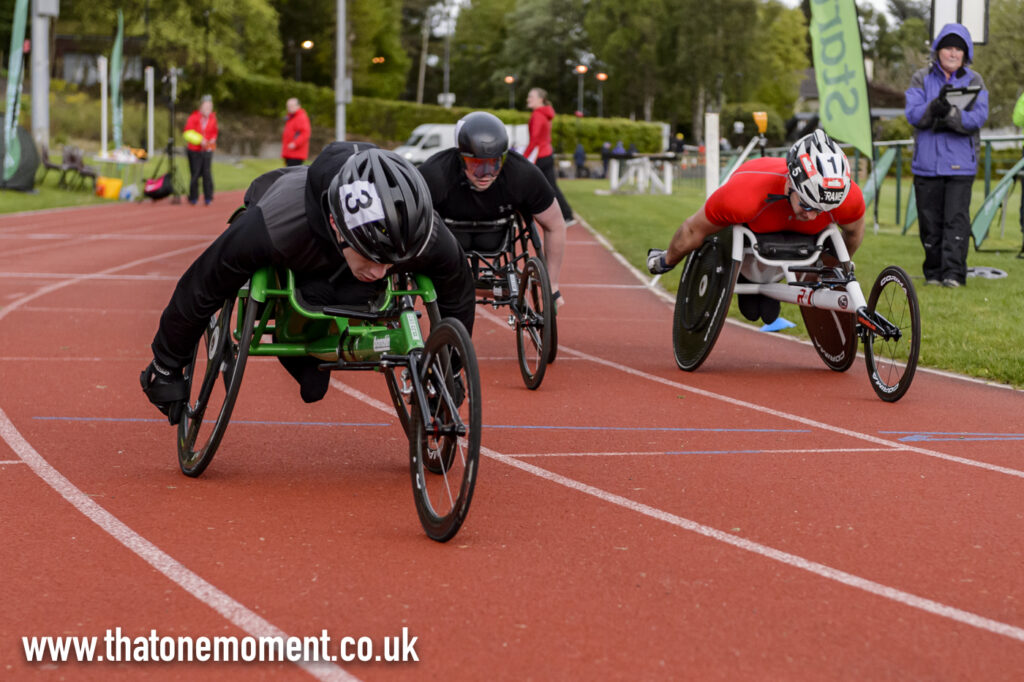 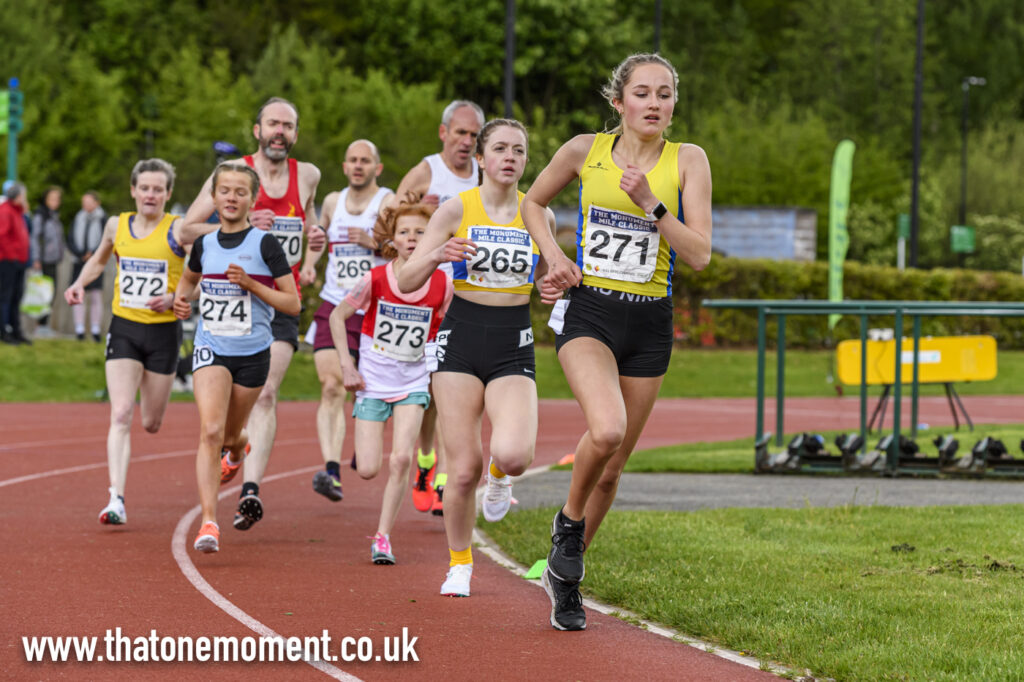